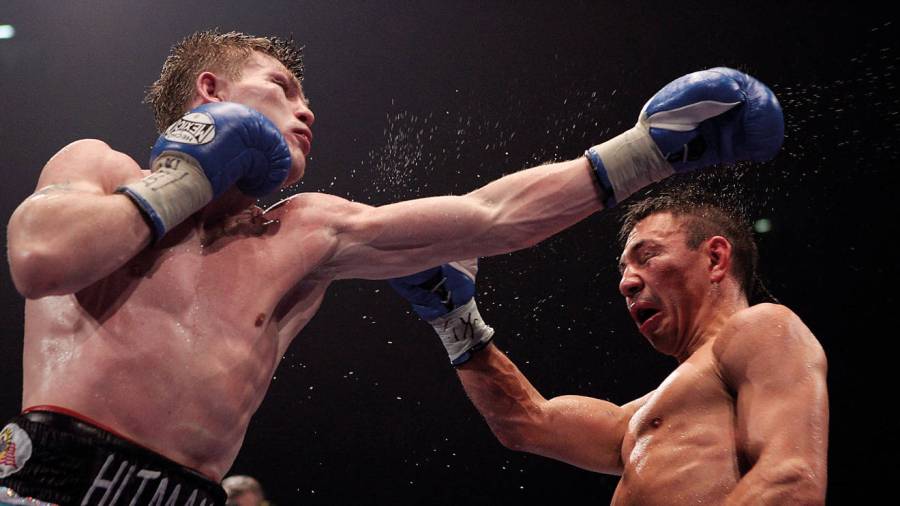 In his own words, Ricky Hatton details the best night of his career

WITHOUT doubt winning a world title is a wonderful thing, but with there being so many versions nowadays you can still win one and not be the best in the division. In my case, I beat not only the best super-lightweight in the division, but the best pound-for-pound fighter on the planet, in Kostya Tszyu, and in my hometown of Manchester. The manner in which I did it – the fact that he quit on his stool at the end of the 11th round – couldn’t have been more impressive. I couldn’t have written it more perfectly, and what a war it was: it was unbelievable.

I became the No.1 contender with the IBF after I’d beaten Mike Stewart in four rounds. I’ll be honest – and I know he won’t mind me saying this – Frank Warren, my promoter at the time, said to me, ‘You’re No.1 for the fight but you don’t have to fight Kostya Tszyu, we can go another route’. But I wouldn’t have been the man I thought I was if I turned my back on that opportunity.

It was what I’d dreamed of. I’d made 15 defences of my WBU title against good names like Vince Phillips and Ray Oliveira – my fights in Manchester were always a big deal – but when I went to the Tszyu press conference there were about 15 cameras where normally there would have been three or four. I remember sitting at the top table thinking, ‘This is what you call the big time’.

When you look at the all-time 140lb greats, Tszyu’s right up there. Nobody – and I mean nobody – gave me a chance of winning. They thought, ‘Ricky, with his leaky defence, he’ll walk onto that right hand; he can get cut… Kostya Tszyu just hits too hard’.

It was only me and my trainer, Billy Graham, who thought I could win. We used to sit on the steps at the Phoenix Camp – I’d have a cup of tea, Billy would have a smoke – and the advice he was giving to beat Tszyu, I thought, ‘He’s got it spot on again here’, but no one else shared our enthusiasm.

Tszyu, like a lot of Eastern European and Russian boxers, was always a long puncher; the leverage was always at the end of the punch. When Sharmba Mitchell and Zab Judah, who both lost to him in the opening rounds, were pulling away from his punches they were where his right hand was most potent. We thought if I stayed on his chest he’d lose that leverage.

That’s what Billy said: ‘You’ve gotta move your head as you go in – side to side – even if he nails you you’ll take the sting out of it a bit. It’ll be a short right hand when he’ll want you at the end of it. Stay close, and work the body.
‘He likes to ease into fights, find the range with the jab and boom that right cross. If you can start fast and bank the first two or three rounds, he’s going to have to put his foot on the gas earlier than he’d like and if we get to eight or nine he might not have a lot left.’

I always trained hard but this time I found an extra gear: the fact that nobody fancied me proved my fuel. Most thought I was exciting and knew I sold tickets but they also said I’d get found out when I reached the top and it used to p*** me right off. Every time I read an article about the fight – ‘He’ll be lucky if he gets past four, he’ll walk onto a right hand’ – I’d go in the gym and do extra. I really did think I was going to shock the world.

In the pre-fight changing room it was the same mates, the same team, the same close unit I’d always had – and they were all saying, ‘Come on, Ricky, you can do this’ – but there was a nervousness. It was like the fans – there was all the enthusiasm I could ask for, but I’m not an idiot – I knew when someone was anxious and giving me a bit of bullshit: it was in everyone I spoke to.

Because of my nerves, the ring walk was absolutely horrendous. I always used to look into the crowd, and the fans’ eyes, before a fight, and I could see it: there was a nervous tension where they wanted to get behind me but there’s that doubt. I’ve been to the M.E.N Arena many times to watch David Haye, Amir Khan, Carl Froch but no disrespect to those names, that night against Tszyu there was an extra tingle in the air.

I got in the ring, and you’d have thought there was a speaker underneath it because it was vibrating. I kept telling myself, ‘Don’t let your arse go now’, and I was looking across at Tszyu thinking ‘Everyone believes you’re going to destroy me but you’ll need an Uzi to stop me tonight’.

On Billy’s advice, I came out of the traps like a greyhound – throwing punch after punch, catching him with a couple of left hooks – and won the first two rounds by a mile. Tszyu won the next three or four by picking me off with the jab and throwing right hands. His punch volume was much higher because he had to load up with that many shots just to keep me off and I thought ‘He’s not going to maintain this’, but then I had a bit of a panic that he was banking the rounds and the fight was running away from me.

Billy said ‘Don’t worry, keep on him. He’ll eventually break, you’re working him harder than he’s had to in the last three or four years: it’s working’. But even though the plan was to take the sting from his punches it still hurt when he caught me, like he did with two rights in the fifth.

After his stretch, I won a few rounds again. I’d taken three or four low blows, one putting me down on a knee in the seventh, and I was frustrated the referee, Dave Parris, hadn’t warned him, so in the ninth I gave him one back. Mine was slightly better but it was very important: I didn’t wanna show any weakness. If he stung me with a right I’d drop my hands and look at him with my poker face; if he hit me with a low blow he got one back; if he hit me on the back of the head he got one back. He was a punching machine and I was beating him at his own game, which must have been very sickening for him.

I remember one particular burst in the 10th round, he put five or six punches together, which he landed, but the steam had gone out of them. It was like it was one last throw of the dice: he landed them all but I think it took more out of him than me. Then I saw him take one massive breath and I went back to the corner and said, ‘I think he’s ready for the taking now, Billy, he’s just come out of a clinch there: when we was grappling inside he just felt weaker’.
After that I was really hurting him and he was bobbling about all over the show, and I’m thinking, ‘They’re going to pull him out here,’ and then ‘There’s only two rounds left, they might not’, so I was just trying to summon one last bit of energy for what was left.

I was looking at the floor at the end of the 11th and I’d spat my gumshield out, just trying to summon that one last bit of energy. I was nearly saying to Billy, ‘I’m finished, I’ve got f***-all left’. I’d have sucked it up for the last round, but as the 12th was about to start Tszyu pulled out and it was a massive relief when he did. I just fell in a heap because I didn’t have much left. It was a moment me and Billy will never forget: we just felt we’d proved everyone wrong.

It changed everything. People will make up their own mind about what is the greatest win in a British boxing ring but the fact it’s up there as one is enough for me. I still have people turn round and say, ‘Ricky, that win that night will never be beaten, none of us thought you’d do it’. I never thought I’d be involved in something like that.