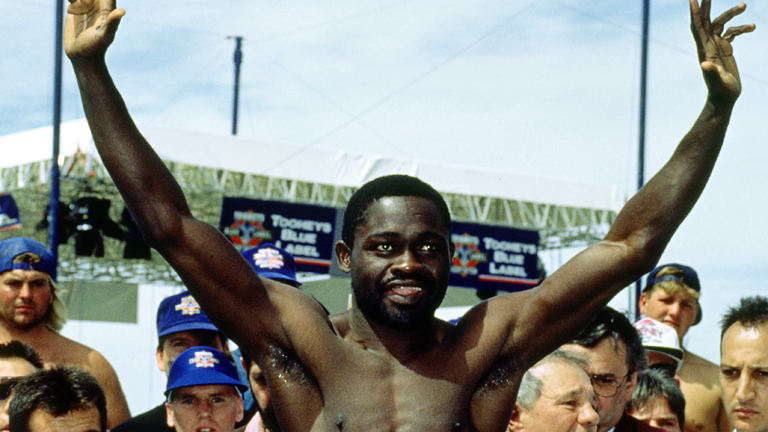 In his own words, Jesse James Leija remembers two victories over Azumah Nelson

IT’S really hard to pick just one because I had 57 fights and every fight meant something.

I didn’t start fighting until I was 19, so no one thought I would have a career like I did. But I would say that maybe there were two nights above all of the others. The first was the first fight against Azumah Nelson and the other was the second fight when I beat him for the title.

In that first fight I fought for a world title in San Antonio, my hometown, in front of 63,000 at the Alamodome. It doesn’t get any bigger or better than that. I was the hometown guy and the audience was crazy.

When I came to the ring, there were guns blasting off. That night was incredible, it was special to me but then, when I think about it, winning the title in the rematch in Las Vegas was even better.

Winning the title for the first time at the MGM Grand on May 7, 1994 was just unbelievable. I was at my best. Everything was in slow motion. I could see everything coming towards me and react before it came too close.

Of course I was nervous beforehand. Every fighter gets nervous regardless of who they fight. But Nelson was a Hall of Fame fighter and I’m going to fight him, but perhaps I’m more nervous because everyone knows what he does in rematches. Look what he did with Jeff Fenech in their rematch. That’s what he does best.

I thought I had won that first fight [scored a draw] but I was not experienced enough and coasted the last three rounds [in Texas]. But if a horse wins a race by an inch he still wins the race. But we knew it could be controversial. Everyone knows what happened with Julio Cesar Chavez and Pernell Whitaker. But I was more ready for Nelson after the first fight. I had stayed in the gym. I knew it was going to happen. I never left the gym. I was always getting ready to fight. I fought him four times, we fought 42 rounds and I learned something in every round.

And in the second fight I did the same thing I did in the first fight. But I made a point of it to take it round by round and just go after him in every round; not to ease off. I didn’t let him breathe.

The MGM was a special place that night. It’s the centre of the boxing capital of the world. It was my night. The turning point was the last three rounds and even though he needed a knockout I was going after him. It was just incredible. Even when I look back at the tapes of that fight I see OJ Simpson, Nicole Brown and all those celebrities in the front row and it makes you think, ‘These people were there to see me.’ And it was special because my father was in my corner. He was a fighter, too, and he never got to fight for a world title. For me to win it with him there so he could enjoy it too, it doesn’t get any better.

It was amazing. In fact, I was watching the Nelson fights on YouTube recently and in our second fight, I just knew it was my night. It’s those sort of nights you miss in retirement. Age is a tough thing to deal with and you look at fights today and you think this guy wouldn’t beat me at my best. I’m still a competitor and I love to compete but it’s tough not being able to fight. You do it for 20 years and then you can’t do it anymore because you’ve got old. That’s tough. Time catches up to us. Not everyone is like Bernard Hopkins. It caught up with Oscar [De La Hoya]. It caught up with Kostya Tszyu, and it caught up with me. Father Time beats us all in the end.