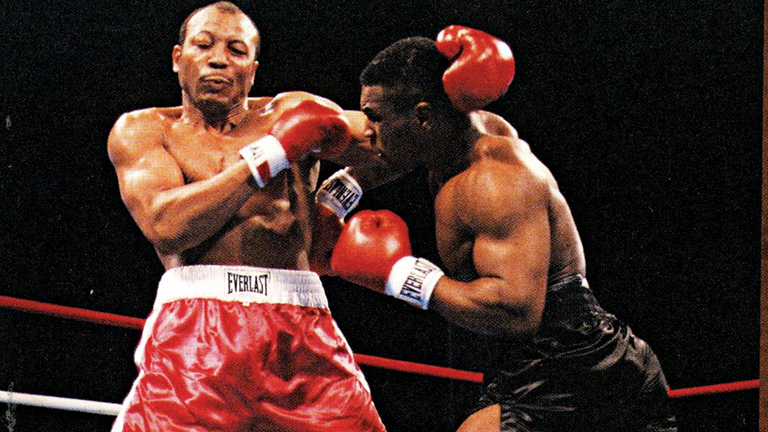 “Mike Tyson, but Frank Bruno hit real hard too, as did Mike Weaver. I fought a lot of big punchers, guys who could stand up to my big punch. With Tyson, it was also his speed and his combinations. But Bruno also threw pretty good combinations. Bruno’s straight right hand was a hard punch.”

“Again, it has to be Tyson! He was slipping all my punches and always coming. He was only 21 and at his peak. He was very strong and had those combinations. My plan was to take him into the later rounds and then get to him when he got tired – but he never got tired. I was a little intimidated in that fight but I was never really hurt too bad.”

“When I won the [WBA] title, knocking out Tim Witherspoon inside a single round. That meant so much to me. Witherspoon was a tough guy, who’d beaten me on points the year before. Nobody expected me to take him out, much less so fast [in the rematch]. He was a great fighter, a guy who got tougher the longer a fight went. I didn’t let the rematch get that far!”

“Michael Spinks. We sparred at Joe Frazier’s gym in Philly. I was just coming up at the time, whereas Spinks was experienced, with the Olympics and his light-heavyweight title fights. But we sparred a lot of rounds, I’d guess over a hundred. We mixed it up, too. He was slick and hard to hit and he knew how to block shots. I learned a whole lot from Michael, absolutely.”

“The Tyson fight. I’d do that differently if I could. I just couldn’t adjust to the guy’s style – he crouched low and I couldn’t hit him properly. Anybody I hit, they were in trouble. Tyson, I couldn’t hit! It was a frustrating night in Las Vegas. Tyson was a student of boxing and he studied all his opponents. He was just totally prepared for me.”

“There are no more big paydays coming my way [laughs]. I don’t miss the actual fighting. I saw that sorry event in Germany [Haye-Chisora brawl in July, 2012] and I’m so glad I don’t have anything like that to deal with! Currently I’m working for a vacation business in North Carolina, and as far as boxing and training goes, that’s what I’m on – vacation! I’m happy. God blessed me. I have my health and strength.”