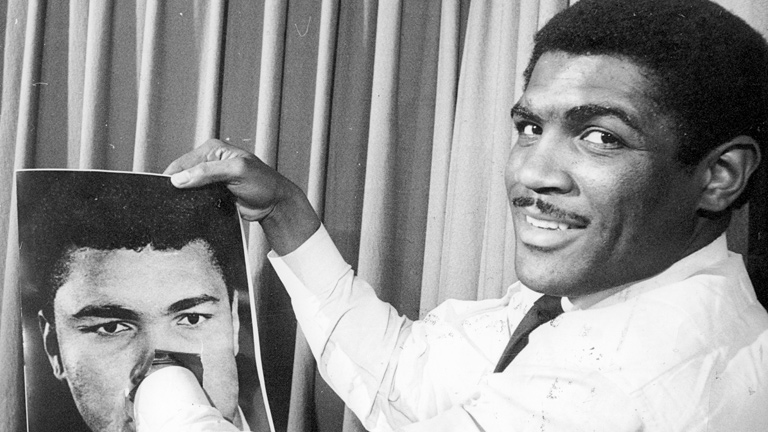 It has long been reported that Muhammad Ali ‘carried’ Ernie Terrell during their 1967 heavyweight showdown. Jack Hirsch, though, does not remember anything of the sort

ERNIE TERRELL was forced to live his post-fight career as the victim of one of boxing’s biggest myths. It has been one of the great injustices in boxing history.  Terrell, 46-9 (21), who held the WBA heavyweight title from 1965-1967, defeated the likes of Cleveland Williams, Eddie Machen, Bob Foster, Doug Jones, and George Chuvalo. Those are impressive credentials, but unfortunately Terrell’s legacy is traced back to one night, that being February 6, 1967, at the Houston Astrodome, when he tried to unify the crown against Muhammad Ali in a fight that is remembered for all the wrong reasons.

Ali outpointed Terrell comprehensively over 15 rounds in what was arguably the greatest performance of his career. It was an angry Ali, probably the only time in his career where he genuinely hated an opponent. And because of that, Terrell’s career would be forever cursed.
The mention of Terrell’s name today invokes sympathy when there should be admiration. His courageous stand against Ali should be lauded, not dismissed as virtually everyone has. Terrell unfortunately became no more than a footnote to the Ali legacy. He is known as the man Ali punished by carrying the full 15 rounds because he insisted on calling him Cassius Clay instead of Muhammad Ali.

Ali–Terrell fight was a highly anticipated event. It paired two heavyweight champions in the prime of their careers. Although Terrell held the WBA version which at the time was the biggest sanctioning body in existence, the public did not take his title seriously, rightly regarding Ali’s lineal claim as being the only one that truly counted. What they did take seriously though was the threat Terrell represented. Sonny Liston was still fighting, but no longer the force he had been. Joe Frazier was on the rise, but considered a couple of years away from being ready to challenge Ali. Terrell was an entirely different proposition.

The men knew one another from the amateurs, had sparred and were friendly.  But any positive history they had evaporated when Terrell claimed he was the real champ. This did not sit well with Ali who had enough things on his mind to make him uncharacteristically bitter. For one, he had been drafted and would soon be forced to either accept going into the military or risk jail time. And his religious conversion to the Nation of Islam was not received well in many quarters. Eventually Ali became the most beloved man on earth, but at the time no public figure was as generally disliked.

The storyline evolved when both men were being interviewed by Howard Cosell six weeks before the fight in a New York studio. Ali recited a poem of what he would do to Terrell. The words were mostly familiar, but what was missing this time around was the playful mood that accompanied Ali’s boasts. Then things got downright ugly.

Today you can’t find anyone who still refers to him as Cassius Clay, but at the time even some of Ali’s biggest fans were still calling him that. It was more out of habit than anything else.

It all happened so quickly that Terrell never got a chance to rectify what Ali thought was an unforgivable slight. With Ali on one side of Cosell and Terrell on the other, the Chicago native said ‘Clay’ when being interviewed. An animated Ali immediately asked Terrell why he had called him that, then a few seconds later referred to him as an Uncle Tom.

Ali then said he would punish Terrell by beating him up in the ring and making Ernie call him by his name there if he would not do it at that moment. By then there was no turning back, the small window where Terrell could have backtracked and said ‘Ali’ without losing face had passed. He now had no choice but to continue to refer to him as Clay. Anything else would have hinted that Terrell had fear of his opponent.

Now more than 50 years later, I watched the entire replay of the fight again on You Tube. After more than a half century of arguing that Ali had not carried Terrell, I was looking for evidence that confirmed my opinion or repudiated it.

Cosell was doing the commentary along with Chuvalo.

Terrell was not regarded as a hard hitter. He was said to be a boring fighter   known for predominantly using his left hand, winning his matches by constantly landing hard jabs, then draping his big body around his opponents. At 6ft 6ins Terrell was the taller man, something Ali was not accustomed to.

Terrell tactics were surprising in that he carried the fight to Ali. Ernie assumed the role of the puncher. Ali was angry, but it was Terrell who was fighting that way trying to win by force. His punches were sometimes connecting, but Ali’s speed and boxing ability were keeping him in control.
The outcome was still in doubt after six rounds. Ali was clearly ahead, but Terrell was having his moments. However, he was fighting handicapped. By the third round Terrell’s left eye started to swell up badly and would get progressively worse as the fight went along severely hampering his vision. Terrell would later say that Ali had intentionally grabbed him in a headlock and stuck his thumb into the eye. Larry Merchant then a columnist for the New York Post concurred saying that Ali used the thumb of his glove like a pitchfork.

“He took my eye and rubbed it on the top rope” said Terrell in the ring after the fight. “I was seeing three of them [Ali] from the third round on.”

Terrell would go on to accuse referee Harry Kessler of letting Ali get away with constant fouling, but watching the fight all these years later dispels that. If anyone was to blame it was Terrell for frequent Rabbit and Kidney punches which drew no firm warning. Ali would sometimes grab Terrell in an unorthodox way, but it only seemed to happen when the men got tangled up on the inside.

The turning point occurred in the seventh when a hook spun Terrell around and he stumbled face first into the ropes. Terrell his legs unsteady, started to retreat. Ali pounced going all out for the knockout. Terrell in desperate shape survived by launching an attack of his own, forcing Ali into a corner and landing a big overhand right which caused him to blink and hold tightly. “Clay is hurt, Clay is holding on, Ernie Terrell is fighting valiantly back” the voice on the radio screamed. Terrell made it out of the round, but his right eye was in bad shape as well.

It now seemed only a matter of time, something Ali sensed as well. He started the eighth round moving forward, then midway started to taunt Terrell. “What’s my name, what’s my name” Ali shouted. When the bell rang, Ali yelled out the words again. Terrell lurched at him, but they were quickly separated.

It was in the eighth round that the myth was perpetuated that Ali was carrying Terrell. It was a fair question to raise as the fight progressed and was done so by Cosell, Chuvalo, and Joe Louis who had temporarily joined the broadcast. Both Louis and Chuvalo stated that Ali could dispose of Terrell if he wanted. Louis predicted the ninth would be the last round of the contest.

After the eighth, Ali basically stopped talking to Terrell. He started to conserve energy in the event he would have to go the distance. Terrell was battered and weary, but still landed jabs and would jolt Ali with a hook now and then.

Baseball great Joe DiMaggio joined the broadcast team in the 12th and remarked that Ali looked tired. “We had questioned whether Ali could have put him away, now it doesn’t appear he can,” remarked Cosell.

“We have one-minute left in the 13th and now it appears more and more likely that this fight will go the full 15 rounds” opined Cosell, more or less acknowledging that Ali was trying, but unable to finish Terrell. And at the end of the 14th, Chuvalo said “he (Terrell) looks fairly strong, I think he’ll go the distance.”

Over the last two sessions Ali opened-up, but every time he appeared to have his opponent in trouble Terrell did enough to hold him off. Despite Ali’s dominance it was a physically taxing fight for him as well.

The final scores of 148-138, 148-133, and 148-137 reflected Ali’s superiority. But rather than praise Ali’s magnificent performance, the press elected to focus on his conduct describing it as barbarian.
So did Ali carry Terrell as history has led us to believe? After looking at all the evidence it becomes apparent he hadn’t. Ali despising Terrell was genuine. He could not have wanted his opponent to have the satisfaction of going the distance, remaining on his feet for the entire fight.

Consider this: Jimmy Ellis was a stablemate and a boyhood friend of Ali’s. He was someone that Ali was fond of. Yet when they fought, Ali far ahead on points opened up in the last round and ended it with a half-minute remaining. Why not do the same to Terrell, a man he hated? The answer is that Ali couldn’t.

At the final bell Ali did not acknowledge Terrell. He walked wearily back to his corner and never said another word to his opponent directly.

“Did you carry Terrell could you have knocked him out?” Cosell asked Ali in the ring afterward. “I don’t believe I could have,” Ali admitted. “I had a couple of opportunities to knock him out, but he was so determined. I didn’t realise he could take as much punishment as he did. After the eighth round I laid it on him but I found myself tiring. I had 15 rounds to go and started pacing myself.”
Any small thought that Ali was being magnanimous was erased a moment later when his contempt for Terrell resurfaced.

“Ernie Terrell has no class whatsoever. I proved he wasn’t nothing and he better pronounce my name right the next time. It’s a joke calling him a champion.” And when they replayed the match on ABC’s Wide World of Sports a few days later, Ali in the studio continued to trash Terrell to Cosell.
Nat Fleischer in The Ring Magazine was critical of Ali’s inability to get a stoppage. Fleischer pointed out that the likes of Jack Dempsey, Rocky Marciano, and Louis would have been able to dispose of Terrell after he had been so thoroughly beaten up. Fleischer’s opinion withstanding, Ali’s brilliance that night has been historically overlooked making him a victim as well. It might have been the best performance of Ali’s career. And by going the distance with him of Terrell’s as well. That is how I remember the fight because that is the way it really was.