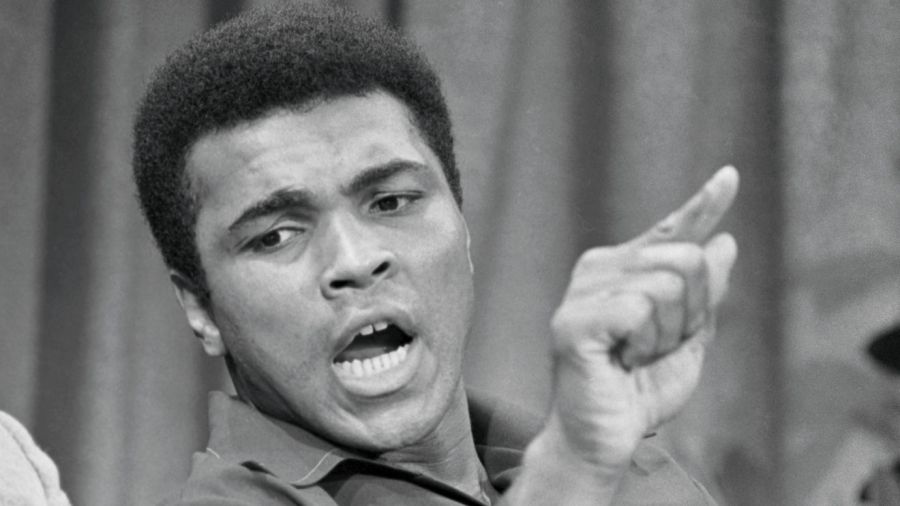 Born on this day in 1942 Muhammad Ali confronted boundaries like no other. Claude Abrams paid tribute to The Greatest

LIFE is a journey of self-discovery, achieved through our experiences and relationships, but most searchingly by displaying courage and being fearless.

Muhammad Ali confronted boundaries almost like no other man. He fought against the odds, stood firm when most would have run and didn’t compromise his beliefs for what would have been a cosier, less complicated existence.

In the late 1960s he was one of the most despised men in America for taking on the most powerful nation in the world when refusing to show support for the war in Vietnam and against communism.

But Ali, then only in his twenties, didn’t buckle under the mighty wave of hostility – calls of being a traitor, the risk to the safety of his family – and the threat of jail and having his world heavyweight title taken away.

And now he is probably the most recognisable and acclaimed sportsman ever. He is revered not only in his homeland, but everywhere.

The world, not just boxing, was lucky to have him. Even muted by Parkinson’s disease, Ali retained a remarkable and incomparable presence.

Nonetheless, I always wondered why a man so beautiful and majestic would be drawn to a sport that put his handsome features at risk or how a fighter as generously blessed with defensive skills and extraordinary reflexes as Ali was ever wound up absorbing too many punches to the head.

Those who insist Ali’s career had nothing to do with his condition might fiercely disagree. But when I watch his punishing fights against Joe Frazier, Ken Norton, George Foreman, Leon Spinks and, in particular, Larry Holmes and then reflect on his 61 fights, concluding when Ali was close to 40, and all the arduous training and sparring that accompanied each test, there is no doubt in my mind that boxing taught Muhammad a cruel lesson.

In the ring he had bewildering stamina, could jab brilliantly, throw a superb right, hook and combination punch at sometimes astonishing speed. But he wasn’t a huge puncher. Usually, he’d have to connect a dozen times where Foreman might need only one. He fought for over 10 years with bad hands.

Seldom, too, did Ali ever attack the body and he was also a master-clincher, clever at breaking the flow of an opponent’s attack and not always exciting to watch. But he was a showman extraordinaire, charismatically in a world of his own.

So was Muhammad Ali really the greatest? There have been finer boxers, harder punchers, faster movers and those who competed longer and with greater success.

Some will argue, too, that no one could take a punch like Ali. But I believe Ali’s exceptional recuperative powers surpassed his durability.

For me Ali wasn’t the greatest boxer of all-time, as he so often liked to brag. But he WAS the greatest man ever to fight in the ring and the boxer who made the greatest impression outside it.

Life beyond the world in which they excel is a struggle for most boxers when they retire. Ali suffered the withdrawals of competition, but never any lack of attention.

Sure, he fought way too long and against extremely tough men in often vicious bouts. He should have quit after beating Frazier in 1975. Yet he carried on another six years.

The ring was his stage and pulpit. He was as comfortable with crowds and people as he was in his own skin.

Like any man, though, he made mistakes. He said and did things years ago that today he would perhaps not agree with. But Ali always stood up for his beliefs.

Whether in the ring or outside of it, Ali was unwaveringly tough. But he was also gentle, compassionate, amusing and generous.

He didn’t just enter the lives of those who knew or met him, but also people who lived in faraway lands, who believed in different gods, spoke different languages and had conflicting political views.

Muhammad Ali wasn’t just a boxer. He was an entertainer and a warrior for mankind. He was the first true globetrotting champion.

We may have looked at him in his later life and felt sad, but only because we compare what we see with how he was in his prime.

How could a man who spoke so fluently now be so verbally debilitated?

How could a man who in his youth stood so elegantly, tall and shined physically, possibly be reduced to a shuffling old-timer?

How could Ali, once so outrageously witty, delightful, engaging and brilliant, be rendered so expressionless?

Really, though, it doesn’t matter, because Ali was happy. His life had changed. He was not a boxer any more. With humility, selflessness and courage, he rolled with the punches and thereby provided us with another lesson.

As he was in the ring, never accepting defeat, Ali boldly lived on without inhibition. His form, movements and means of communication altered, but he remained the same being and an exceptional one at that.

No boxer ever rocked the world like Ali and, dare I say it, ever will again.