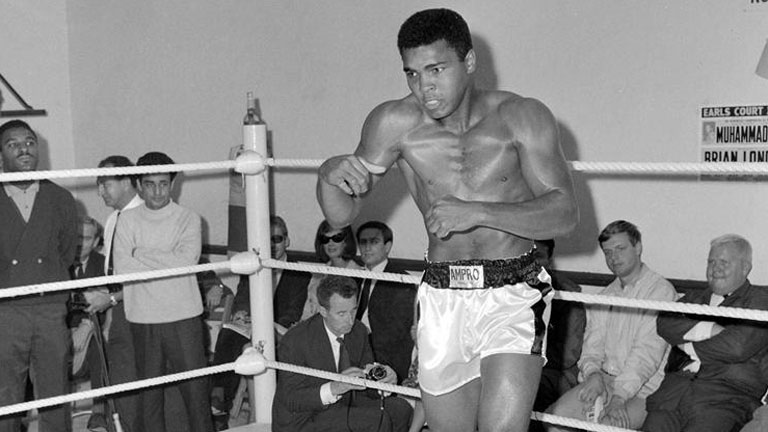 Muhammad Ali has died aged 74. Tris Dixon looks back on the incredible life and times of the Greatest

MUHAMMAD ALI will always be “The Greatest”. That is what Muhammad Ali called himself and that is how people around the world refer to him, even into old age and death.

In 1996, when Muhammad Ali lit the Olympic flame to open the open the Atlanta Games, he shook badly as he suffered from Parkinson’s and showed the world that the man who would seemingly never grow up was growing old and that the price he was paying for years at the top of this brutal sport was tragically evident.

Boxing might not have been solely responsible for his condition, but wars with the likes of Joe Frazier and George Foreman in an extraordinary 21-year professional career and damaging losses in his final two fights, to Larry Holmes and Trevor Berbick would clearly not have helped.

Tales had become legend, fictions had become fact and the greatest entertainer boxing had seen had become a figure that generated sympathy from around the world.

But what a ride he had taken everyone on, and what a journey the 12-year-old boy, born as Cassius Clay, who had his bike stolen and was then taught how to box by a police officer, Joe Martin, had been on. Back then, he had hoped Martin would help him get his hands on the perpetrator: or at the very least he would not get hurt should he be able to track him down.

Six years later and the boy might not have ever got his bike back but he had replaced it with an Olympic light-heavyweight gold medal from Rome in 1960.

The story goes that, unable to get served in a ‘white only’ restaurant back in the USA, Clay – then aged 18 – tossed his gold medal off a bridge into the Ohio River in disgust.

Whether that actually happened is still debated, but authorities gave him a replacement medal during a basketball game at the ’96 Olympics he lit the torch for.

Still, Clay returned home – to Louisville, Kentucky – to turn pro. Tunney Hunsaker, the police chief of Fayetteville, West Virginia, was his first victim, a points loser after six rounds, and after three years Clay had won 19 fights, with 15 early nights. The likes of the late Donnie Fleeman, Willie Besmanoff and Lamar Clark could not stop his charge, nor could an ancient Archie Moore. Quality light-heavyweight Doug Jones provided him with his first real exam and Britain’s Henry Cooper gave him his first gutcheck, flooring Clay heavily in round four with a left hook affectionately known to Sir Henry’s countrymen as ‘Enry’s ‘ammer’.

Dazed in the corner, Clay was bought a few seconds by trainer Angelo Dundee, who enhanced a tear in his fighter’s gloves before the start of the fifth round, and the tide turned in the next session when Cooper, cut terribly by his left eye, had to be withdrawn in front of a heartbroken Wembley Stadium crowd.

He “shook up the world” as he promised he would when he defeated one of history’s most feared heavyweights Sonny Liston. A huge underdog, the young braggart complained of being blinded by some kind of liniment on Liston’s gloves and after the fourth round he returned to his corner telling trainer Angelo Dundee his eyes were burning and that he could not see.

Dundee sponged them off, shoved him back into the fray and he survived the fifth and took it to the champion in the sixth, after which Liston bailed out complaining of a shoulder injury.

It was 1964, Clay (who changed his name to Muhammad X after the fight) was the world heavyweight champion but he had not even scratched the surface of what he would go on to achieve.

Liston went down in one in a rematch, in Lewiston, Maine, of all places. Some said Sonny took a dive after being threatened by the Mob. Others saw Ali flash a short right hand over the top that caused the usually sturdy Liston to drop.

The questions were never definitively answered but former champion Floyd Patterson was well behind when stopped in round 12 by a still-improving Ali and then George Chuvalo (in Canada), Cooper again, Brian London (back in England) and Karl Mildenberger (in Germany) were defeated before Ali dismantled Cleveland Williams.

For many it was Ali at his incomparable best. Williams was dissected in three spectacular sessions. Sure, he was not the same fighter he had been a couple of years earlier, when he was shot by a highway patrolman in Texas following a struggle after a bullet moved across Cleveland’s intestines and was lodged in his right hip, but Ali was punch perfect. He floated like a butterfly. He stung like a bee.

The shooting is a footnote, of course, and on the tape all you can see is Ali doing everything right, everything perfectly, mixing graceful brutality with violent artistry.

Fleet of foot and with mesmerising handspeed, he charmed and reviled various sections of society but outraged millions when he refused to be drafted to fight in the Vietnam War. Maybe he would have just had to box exhibitions to boost the morale of bored and wounded troops. Perhaps he would not have had to fight. Either way, he made a stand and refused to be involved in it in any way, shape or form and the stance he took had dramatic consequences that would never be forgotten. He did not fight between 1967 and 1970 as a result of his refusal to fight after he famously said: “I ain’t got no quarrel with them Viet Cong. No Viet Cong ever called me n*****.”

When Ali returned to the ring he did not take an easy option. He stopped hardman Jerry Quarry in three rounds and then came the “Fight of the Century” against his great rival Joe Frazier.

It was a gala night in Madison Square Garden, March 8, 1971, and the fight more than lived up to the exceptional hype as Frazier burrowed his way inside and traded violently with Ali in a battle for the ages.

‘Smokin’ Joe detonated a flashbulb left hook in the 15th and final round – Ali spiralled to the canvas – sealing victory on points. It was epic stuff.

Ali fought another 13 times – including a split decision loss to Ken Norton, which he controversially avenged on points (both split decisions) – before he took revenge on Frazier in a less engaging fight (over 12 rounds) than their first in 1974.

That earned him a title shot at George Foreman, who surprisingly had crushed Frazier in just two rounds for the title and in Zaire, in the Rumble in the Jungle, on another history-making night Ali astonished the world once more.

Some were concerned for Ali’s welfare going into the fight such was the form of the rampant champion but, as the rounds ticked by and Foreman’s tank began to empty with Ali lying on the ropes and letting the champion whale away, the unlikely happened. The challenger burst through with a right and a leg weary Foreman crumbled and was counted out.

It was a monumental win but one could argue even that was eclipsed after Ali made three defences (against Chuck Wepner, Ron Lyle and Joe Bugner) when he met Frazier to settle their rivalry in Manila in the Philippines.

They were older and slightly past their excellent best from four years beforehand, when they warred in New York. But their astonishing struggle in the Araneta Coliseum was one of the most savage battles of all-time, in any weight class.

Ali took pre-fight hype to another level, cruelly taunting Frazier – as he had done before their first two bouts. He personally insulted Frazier, referring to him constantly as a ‘gorilla’.

“It’s will be a killa and a chilla and a thrilla when I get the gorilla in Manila,” he would laugh.

Still, they pummelled one another for 14 rounds until Frazier, with his eyes swollen and face lumpy, was withdrawn by his trainer, Eddie Futch. It was gruelling and Frazier was left heartbroken when Futch said to him: “No one will ever forget what you did here tonight.”

Six defences on – including this gruelling win over Earnie Shavers – and Ali gave was challenged by Olympic youngster Leon Spinks, who had won just six fights as a pro and drawn once. Ali, who overlooked the novice, had not trained and was shown up, losing his crown on points over 15 rounds before making history by becoming the first three-time heavyweight champion when he whipped Spinks seven months later, in September 1978.

Read more on that final, historic, win over Spinks

But the end was near.

His old sparring partner Larry Holmes wept as he thrashed his mentor at the close of 1980 to take the title and then Trevor Berbick, in Nassau in the Bahamas, brought the curtain down on Ali’s career, outscoring him in a 10-rounder.

He had been a pro for 21 years and had fought, and beaten the best of a golden era of heavyweights.

He has been loved, hated, reviled, admired and, latterly, adored. And it turns out he was right all along, he really was, and remains, “The Greatest.”

Ali’s fought the best and fought them all. But there was many an opponent, during his title reigns and throughout his career, that in this day and age would have brought widespread condemnation. However, in the interest of staying active, keeping out of trouble and being professional, Ali fought often.

However, you could always question the credentials of the likes of Richard Dunn, Alfredo Evangelista, Brian London and Karl Mildenberger. Yet he used them more to tick over or tune up. And the fact that he boxed so many A-listers makes this argument almost null and void.

Fighting around the world

Of course, Ali’s great rival was Joe Frazier but, style-wise, tough and musclebound former US marine Ken Norton – who came from San Diego in California – gave Ali all kinds of problems in their three fights, particularly their first (which Ali lost over 12 rounds) when Muhammad spent much of the contest boxing with a broken jaw. On nine scorecards from their three contests, there was only one with more than a round or two separating them.