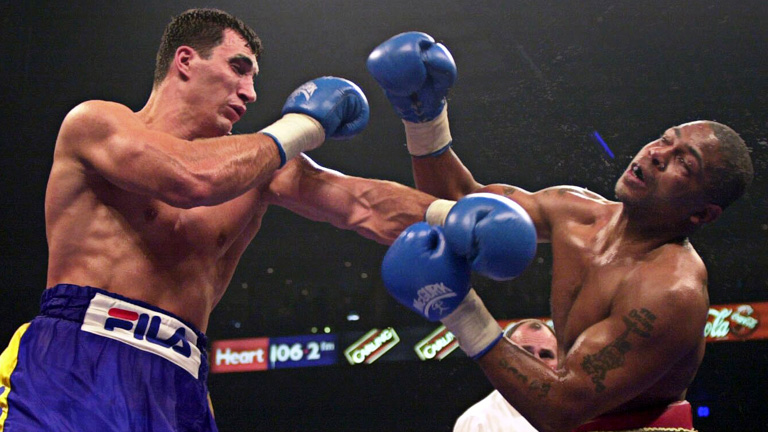 “MY best night, I actually have three I want to list. No. 3, my win over Tye Fields [ko 1 in 2008]. No. 2, my win over Dominick Guinn [sd 10 in 2004] and No. 1, my win over David Tua [pts 12 in 2012]. I was the underdog my whole career, but the win over Tua means a lot because I worked so hard for that fight, and it all paid off. I did so much great preparation in the gym and when he dropped me in the 12th and final round, and he broke my jaw, I was able to get back up and continue fighting. And I won by a unanimous decision, which is unheard of in the other guy’s backyard. I went to New Zealand and I beat Tua.

“My worst night, I have two. The loss to Odlanier Solis [rsf 2 in 2009] and the loss to Hasim Rahman [ud 12, for the interim WBC title, in 2005]. The Solis loss bothers me because I took it for selfish reasons. I had just fought David Haye, another bad night for me, because I got too overemotional due to the bad way Haye and his people treated me while I was in London, and the money from that fight had gone. So I needed money and took the Solis fight on short notice, just for the money. I had two weeks to get ready. And the Rahman fight, I should never have taken. I had just beaten Owen Beck and Guinn and I was in line for a title shot. I should never have fought my friend, Rahman. I was too emotional going in and though I still think I won, it was a bad fight for me.

“I fought a lot of punchers, such as Tua and Wladimir Klitschko. But the hardest I fought was probably Nikolay Valuev [for the WBA title in 2006]. What happened was, just before the fight, Don King told us it would be fought in a 16-foot ring, even though we had trained for at least a 20-foot ring. I had had a good camp but once I had to fight him, such a big, tall guy, in such a small ring, all my preparation went out of the window. With a full-size ring I was going to make him overextend and then counterpunch, as I’m a natural counter-puncher. But that was such a mentally tough fight. That was the first time I had ever suffered a concussion. I had to spend a night in hospital and it was six or seven months before I was back to normal.

“The best guy I sparred, I’d have to name a few guys. I sparred Lennox Lewis as he was training for Frans Botha and I was training for Wladimir Klitschko. I also sparred Eddie Chambers quite a lot, and Malik Scott and Maurice Harris. The sparring with Lennox actually took a lot out of me. Every day we had a war in sparring. I was young and cocky back then and I wouldn’t hold back. We beat each other up and we both had a bloody nose and we bled from the mouth. My trainer at the time, Eddie Mustafa Muhammad, he told me they [Team Lewis] wouldn’t let me stay sparring with Lewis as it was too hard work for him. I didn’t know it at the time, but it was too hard for me too. Emanuel Steward said we’d do no more sparring after around the 21 rounds that we’d done.

“My toughest fight might have been either the Rahman fight or the Haye fight. With the Haye fight, the referee never gave me a break. It was an ugly fight, but we both hit behind the head and on the break. But the referee told me and not him. He kept catching me as I was off balance and off guard. His punches never really hurt me but I kept going down. I put him down also, and Haye told me himself that I did knock him down, but I was so emotional in that fight and I messed up. I would definitely love to be able to fight that fight over again.

“The hardest part of retirement? I have no real regrets other than I wish I’d had sufficient time in training camp for a number of my fights. I retired because I didn’t want to just fight to take paycheques. I knew I had to be realistic and I knew that I’d always be in second place when I fought guys who were 22 or 23 and I was 42-years-old. A couple of fights I’d like to fight over again – Haye and Rahman, with the Rahman fight I should have waited for my title opportunity and fought someone else, but otherwise I’m satisfied with my career. I took on everyone I had to fight and I have a lot of fans and I appreciate them all.”