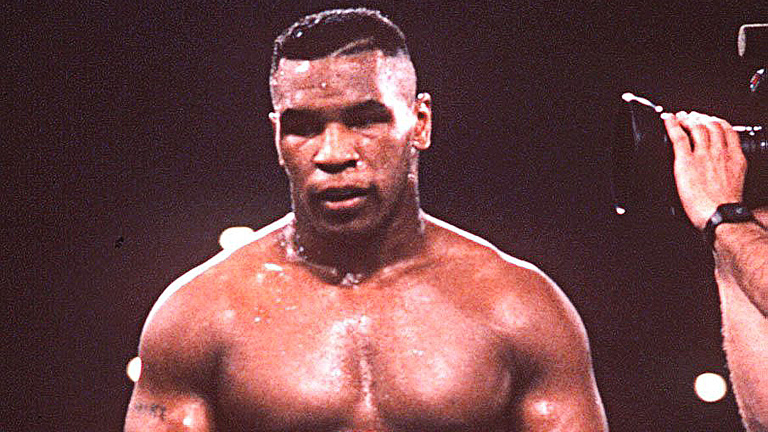 ANTHONY JOSHUA’S stunning victory over Wladimir Klitschko has made him the biggest name in world boxing, according to Mike Tyson.

Heavyweight Joshua climbed off the canvas to stop Klitschko in front of 90,000 fans at Wembley Stadium last Saturday.

Although the WBA, IBO and IBF titles are now Joshua’s, Tyson revealed he picked Klitschko to emerge victorious before the fight but believes the Briton’s performance displayed all the attributes needed to reign the division for years to come.

“It was a great fight,” Tyson told ESPN. “I had actually picked Klitschko to win as I thought this was just some jumped-up young guy from England. But man he fought well. Klitschko is 41 and no-one has ever done that to him.

“Importantly, he showed heart. He took a big punch from Klitschko and went down but he got back up. He showed real intestinal fortitude. He’s consistent, persistent and he didn’t give up. There’s no quitting in him. I love that he goes out there to hurt his opponent, too. That’s what boxing is all about – but most fighters just don’t have that hunger.”

Following a troublesome childhood, Joshua’s journey to stardom has drawn comparisons to Tyson, who endured hardships during his upbringing before becoming the youngest heavyweight champion in history when he beat Trevor Berbick in 1986, aged 20.

Tyson, who also won his first 19 fights by knockout, insists Joshua’s journey is evidence that the sport of boxing can offer people an outlet for success.

“I see the comparison, sure,” Tyson added. “If you are of an Afro-English background you’re likely to have a tough time; if you’re born in the wrong part of town it’s always going to be rough. You’re going to be financially challenged, scholastically challenged. It was like that for me and it’s like that now.

“Boxing gives kids – like me, like Joshua – an outlet. You can take a guy with nothing, clean them up and next thing he’s meeting the President of the United States or the Prime Minister of the UK. It’s a great leveller.”

With his newly-acquired status as the number one fighter in the heavyweight division, Tyson believes Joshua is the only fighter fans will want to see and thinks a fight with WBC titleholder Deontay Wilder is not a good idea.

Tyson, now 50, explained: “With what Joshua can bring now everyone will want to fight him because he is bringing the money to the table. After the Klitschko fight, nobody is going to want to watch Deontay Wilder or any of those guys. They won’t pay for it, they want the best – and the best is Joshua.

“I really don’t think Deontay Wilder would be a good fight for Joshua, I’d much prefer to see him fight Mike Perez. He needs a couple more fights but that could be great to watch.”