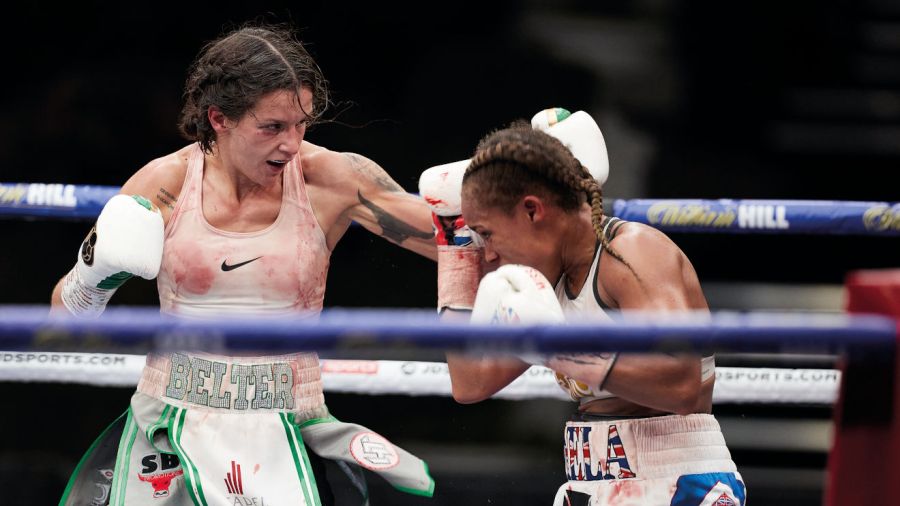 Mikaela Mayer, Stacey Copeland and a panel of boxing experts on the Harper-Jonas result and whether women's boxing should go to three-minute rounds

Was the draw between Terri Harper and Natasha Jonas a fair result?

Mikaela Mayer
Super-featherweight contender
I was watching the Harper fight the way a judge who was in favor of the champ would watch. Only because I know how boxing works: if you’re going to take the belts from the champ it has to be convincing. I think Jonas would have won two more of those rounds if she didn’t let herself get backed up against the ropes. But since she didn’t hold her ground… I see why they made it a draw. She was landing the cleaner shots on the inside even as she was backing up but it still doesn’t look good when you allow someone to push you back. I’m happy with the draw. Going to rewatch just to make sure but in the moment I saw the draw as fair.

Hannah Rankin
Former world title challenger
I had Tasha winning. I felt she had done enough. She put everything into the fight and it was inspiring to watch. But it wasn’t the kind of fight that you can call a robbery. Perhaps if Harper had won it might feel like that, but a draw after a close fight is a fair result. It’s great that everyone is talking about it.

Richard Farnan
Trainer/Campaigner for women’s boxing
I think it was fair because it was a close fight, but I thought Jonas did the cleaner work and her punches were more accurate. Harper was always busy so it was one of those kind of fights and in the end you could make a case for the draw. But what a fantastic fight it was!

Lisa Whiteside
Professional fighter
Utter respect for both ladies, it was an amazing fight but I believe Jonas won the fight by a couple of rounds. She also landed the more substantial shots and obviously had that round where she rocked Harper. I’m not being biased at all as I think both are amazing but I don’t think it should have a draw.

Stacey Copeland
Commonwealth champion
I thought Natasha Jonas did enough to win. Terri did really well but I thought Tash landed the bigger and cleaner shots. Brilliant fight though so well done to both fighters.

Mikaela Mayer
Women’s boxing needs to and will eventually go to three-minute rounds. There’s no way around it. The world is seeing the talent and evolution of women in the sport and it’s just a matter of time. I’m for it and it will help the best really rise to the top when conditioning and endurance is truly tested.

Hannah Rankin
Definitely but we can’t make sweeping changes, it has to be done in phases. It would make sense to me to increase the rounds from two to three minutes at world title level. European title fights are two minutes, but at the highest level, we should be given the chance to fight over three.

Richard Farnan
A very tough call. It was discussed at the WBC Convention in 2016 and they decided, after consulting doctors, that two minutes was safer. But you could say exactly the same about men’s boxing. More and more fighters want the longer rounds and the 12-round fights. We certainly need to look into it.

Lisa Whiteside
For sure, ladies should do three-minute rounds too, just like they do now in the amateurs. Two-minute rounds go way too quick where if a boxer holds on after taking a shot for example then time just flies and therefore makes it very hard to get the stoppages wanted by all boxers.

Stacey Copeland
It would likely lead to more stoppages and KOs so I guess people would prefer that for the entertainment value. I’ve read that the science suggests it’s more dangerous for females if they suffer concussion though so perhaps there’s the matter of safety to consider, too.