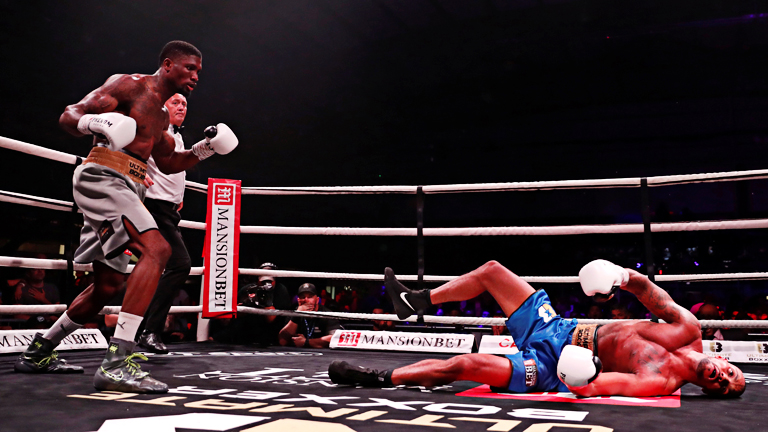 ALTRINCHAM’S Planet Ice played host not only to pro boxing for the first time but to the latest instalment of the Ultimate Boxxer series, this one featuring the heavy hitters up in the cruiserweight division.

At the conclusion of an exciting evening Londoner Mikael Lawal skated off with the prize-winner’s cheque along with the Golden Robe after sending pre-tournament favourite Damian Chambers of Dukinfield, Manchester heavily to the canvas with just 94 seconds of the final having elapsed.

Referee Mark Lyson waved it off at a count of six to allow medics to attend the beaten man, who had been floored by a booming left just a split second after seeing his own purposeful right miss by the merest whisker.

The Nigerian-born winner, now domiciled in Shepherd’s Bush, had begun his quarter-final against Antony Woolery well, sending the two-fight Wolverhampton novice to all fours inside the first. He then took his foot off the gas a little and had to contend with a spirited fightback from his tattooed opponent before going through 30-27, 29-28 and 28-28 on the cards of judges Sarginson, Latham and Lyson.

Lawal’s semis opponent, East Kilbride’s David Jamieson, came in as a late substitute and progressed from the quarters with a split decision victory over Lincolnshire’s Dan Cooper. In a close bout refereed by Mr Sarginson, I thought Cooper might have done enough to edge it, as did Steve Gray who scored 29-28 in his favour; however, judges Latham and Lyson both saw it 29-28 for David.

The Scot paid for beckoning Mikael in when late in the opener of the semi he too found himself staring up from his knees. Although rallying towards the end, he was unable to prevent Lawal reaching the final, scores reading 29-27 for judges Latham and Lyson and 29-28 for Jamieson.

Damian’s journey began with a bang as he needed just 130 seconds to halt Wolverhampton’s Matt Sen, referee Latham waving it off after Matt had twice been sent sprawling.

But Chambers had to go the distance in his humdinger of a semi against Newcastle-under-Lyme’s previously unbeaten Rhasian Earlington, who in a bout refereed by Mark Lyson had just knocked out Romford’s Tony Conquest with a crashing right after just 43 seconds.

Scores at the conclusion of the semi with Mr Sarginson refereeing read 29-28, and 28-27 twice for judges Latham, Lyson and Gray. What a thriller it was with Rhasian recovering from being sent over backwards by an excellent short right just a minute into the opener to give Chambers all kinds of trouble.

Earlington had him on the verge of being stopped in the second when, operating behind a busy jab, he slammed home several eye-catching rights and a clubbing late left.

Had that second session run for just another 10 seconds, it could well have been game over for Damian.

With the venue curfew apparently set for midnight it was starting to look as if the 10-round clash for the vacant Central Area middleweight title between Manchester’s John Telford and Oldham’s unbeaten Jack Kilgannon, due in the ring immediately after the tournament final, might well over-run.

Indeed it did, having gone the full distance – but only by a few minutes. It was Kilgannon, just that little bit busier, who earned the 96-94 verdict from referee John Latham while Telford, cut above the left optic by a flashing right in the sixth, pressed for long periods but was guilty at times of not following his jab in with something more substantial.

Sean Ben Mulligan of Prestwich, in his first paid outing for 12 months, triumphed 59-55 for referee Sarginson over Warminster’s Paul Cummings, who never stopped trying and did sufficient to nick an exciting final session.

THE VERDICT: For the third Ultimate Boxxer tournament on the bounce honours go to the boxer in the grey shorts.