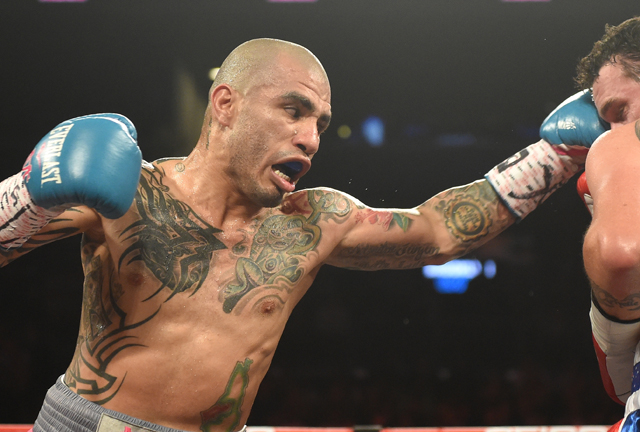 Cotto and Canelo speak about their November 21 showdown

MIGUEL COTTO is determined to give the fans what they want when he takes on Mexico’s Canelo Alvarez on November 21 at the Mandalay Bay Events Center in Las Vegas on November 21. The Puerto Rican’s WBC middleweight title will be on the line but it remains to be seen if there is a catchweight.

Cotto-Canelo is shaping up to be the biggest fight in the history of the famed Puerto Rico vs. Mexico rivalry. The rivalry, which dates back to the 1930s, has seen epic clashes including those between Salvador “Sal” Sanchez and Wilfredo “Bazooka” Gomez, Julio Cesar “J.C.” Chavez and Hector “Macho” Camacho as well as the last super-fight of the 20th century between “The Golden Boy” Oscar De La Hoya and Felix “Tito” Trinidad.

Information regarding ticket availability and a press tour for the fight will be announced soon.

“I will give the fans the fight they want to see,” said Cotto. “As I have always said, during my whole career, I am here to fight the best names and the best fighters. This will be another chapter in my career and I will be ready for him. Fans will enjoy a real fight, another classic battle in the Puerto Rico vs. Mexico rivalry.”

“Historically, mega-fights are made because fans demand them,” said Alvarez. “In this case, the fans have spoken out, longing for this fight and it is my pleasure to say that it is finally happening. All fights at this level are very important, but this fight in particular has something more. It will hold a special place in history as part of the big rivalry between Mexico and Puerto Rico, and I promise all the fans that this is going to be an event that will not disappoint.”

“Cotto vs. Canelo is the biggest fight in boxing, period,” said David Itskowitch, COO Boxing of Roc Nation Sports. “Given the fighters’ styles, it has all the makings of a can’t-miss, all-action fight. Couple that with the popularity of both Miguel and Canelo, and you have a true mega-fight that fans have been clamoring for and one that no sports fan should miss. November 21 has all the makings of a fight that will go down in boxing history as one of the greats.”

“This is the ‘Fight of the Year’ that true boxing fans have been waiting for between two of the biggest stars in the sport today, Miguel Cotto and Canelo Alvarez,” said Golden Boy Promotions Chairman and CEO Oscar De La Hoya. “Cotto vs. Canelo will be an epic showdown, full of non-stop action from the moment the first bell rings. This fight is an example of exactly what Golden Boy Promotions does: puts on the best fights between top fighters in the primes of their careers.”

“We are excited to bring the fight that the fans of boxing deserve,” said Hector Soto, Miguel Cotto Promotions vice president. “This will be a real fight. On November 21, the world will witness the biggest fight in the history of Puerto Rico vs. Mexico rivalry.”