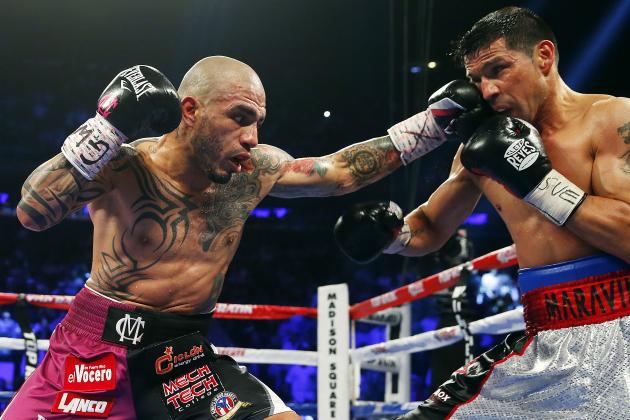 Puerto Rican warrior planning his next move, with Canelo showdown possible for May 2015

MIGUEL COTTO is hoping to make the first defence of his world middleweight title in December with Julio Cesar Chavez Jnr and Saul ‘Canelo’ Alvarez being mentioned as possible opponents.

The Puerto Rican legend, 33, revitalised his career, and then some, when he stopped Sergio Martinez in June. Now trained by Freddie Roach, Cotto, currently on vacation, is keen to enhance an already impressive legacy in the twilight of his career.

“I’m enjoying my last victory and most of all waiting to see what happens in my career,” Cotto said to ESPN Deportes. “There are many possible names, such as Canelo and Chavez, but there again, we are still waiting. This is business. We will ensure the best option for Miguel Cotto. But it is a fact that the Mexico-Puerto Rican rivalry can be rekindled.”

Should Chavez get the call, it seems unlikely he could get down to 160lbs again – the former WBC middleweight boss has been campaigning at 168lbs and beyond recently.

It is understood that a ‘Canelo’ showdown would be more likely for May, and should that become likely, a ‘soft’ challenger might be sought for this year.