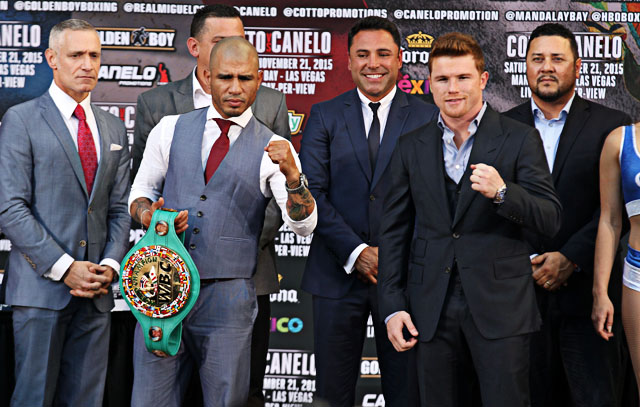 MIGUEL COTTO scowled against the California sun as he stepped up on to the stage to face the challenger for his WBC middleweight title, Saul “Canelo” Alvarez. It’s a familiar expression on the face of the Puerto Rican legend, who was no doubt unimpressed by the boos that greeted him and the cheers that hailed the Mexican hero at their press conference in Los Angeles on Tuesday.

Cotto is a four-division champion but a small middleweight, he’s never in fact reached the 160lbs limit, though he looked the same size as Canelo, who has been fighting at a similar 155lbs catchweight. Neither man is much of a raconteur but their November 21 clash at the Mandalay Bay in Las Vegas should speak for itself.

“In the history of boxing there’s been great fights between Mexico and Puerto Rico and I want this fight to be no different. I was this to be a historic fight. It’s an honour for me and I’m very happy to be fighting a great warrior like Miguel Cotto, a true champion,” Alvarez said.

“I’m going to prepare the best I ever have. I want to be ready for this fight and I want to win because like every Mexican we come here to be victorious. I’m one of those Mexicans and on November 21 we will win.”

Canelo wore his national pride on his well-tailor sleeve and while Cotto represents Puerto Rico just as fiercely in this contest, he first spoke personally, introspectively to the assembled supporters. “I’m here not asking for sympathy,” he said to his rival’s fans. “All I have in life is because of my sacrifice and on November 21 I’m going to show the world what Miguel Cotto is made of. I’m Miguel Cotto here and I’m going to be Miguel Cotto on November 21.”

In other words he plans to do what he has done so often before, win and fight with that familiar valour. Alvarez may be the younger man and the rising star. But Cotto has no intention of passing the torch to his Mexican challenger. He intends to write another chapter in the boxing rivalry between their two countries. “There’s a lot of history behind it and we’re going to contribute to it.” While Canelo insists, “I think I’m a complete fighter now, I have the experience now, the strength, the speed and that’s why I feel so confident I’m going to win this fight.” Cotto promises he remains the same fighter he has been. One of the greats.