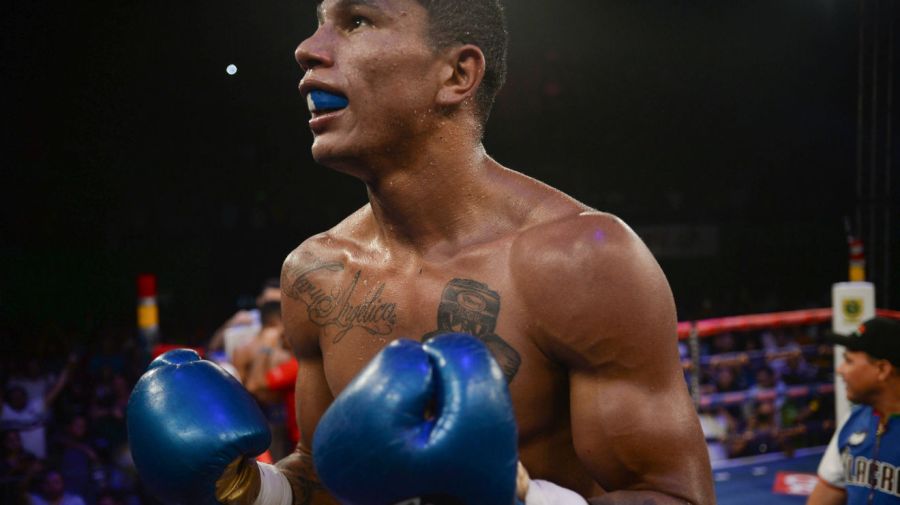 HEAVY pre-fight favourite Andrew Moloney suffered his first defeat in what was only his second appearance outside of his native Australia. Making his US debut at the MGM Grand Conference Center in Las Vegas, the 29-year-old super-flyweight came unstuck against Joshua Franco on Tuesday June 23, with the Texan receiving a close and hard-earned unanimous decision.

Moloney (114 1/2lbs) began the bout brightly but Franco’s consistent pressure saw him steadily chip away at the Aussie. Franco, 24, certainly finished the stronger of the two with his eye-catching combinations. In the 10th round, he cut Moloney by the left eye with a solid right hand. In the following frame, a salvo of shots forced Moloney to touch down by the ropes. This knockdown ultimately proved decisive on the scorecards.

At the end of the 12 rounds, Franco (115lbs) was declared the winner over Moloney, whose features were bruised and swollen after a punishing battle. Julie Lederman scored 115-112, while Patricia Morse Jarman and Dave Moretti both had it 114-113. Tony Weeks was the referee. With the victory, Franco claimed Moloney’s WBA secondary super-fly strap. The organisation’s true champion is four-weight world titlist Roman Gonzalez. Franco’s record now reads 17-1-2 (8), while Moloney’s stands at 21-1 (14).

“I could hear him making noises when I was hitting him, so I knew that little by little I was breaking him down,” Franco said post-fight. “The knockdown was crucial – I needed that.”

At the same venue just 48 hours later (Thursday June 25), Top Rank staged another show headlined by a Moloney twin. Andrew’s brother, Jason Moloney, faced off against in-form Mexican Leonardo Baez in a scheduled 10-rounder. Moloney’s original opponent was set to be Oscar Negrete – a three-time rival of Franco. However, a detached retina rendered Negrete unable to compete, so Baez stepped in as a replacement at late notice.

Jason cheered the Moloney family’s spirits by putting in an impressive performance in his second stateside showing. The former IBF bantamweight title challenger attacked Baez with gusto from the get-go. Despite boasting considerable advantages in both height and reach, Baez was unable to keep Moloney away from him.

The energetic Moloney (117 3/4lbs) peppered Baez with fierce flurries on the inside, including painful body blows and sharp, short hooks that left the 24-year-old battered and bloodied. Baez (118 1/4lbs) demonstrated his toughness by soaking up significant punishment, but after seven sessions, his corner decided that they had seen enough. Referee Kenny Bayless accepted the retirement. Moloney improved to 21-1 (18) with the win. Baez dropped to 18-3 (9) 1NC.

“Baez is an absolute warrior, but nothing was going to stop me tonight,” Moloney stated afterwards. “This is a big, big step towards me fighting for another world title. I want that belt so bad. I’m ready for any of the champions at 118lbs.”

Top Rank’s third promotion of the week took place at the TV Azteca studios in Mexico City on Saturday June 27. The star attraction was WBC super-featherweight king Miguel Berchelt. Opposing the explosive Mexican in a keep-busy lightweight contest over 10 rounds was his countryman, the 25-year-old Eleazar Valenzuela.

It was one-way traffic throughout, as Berchelt, 28, bombarded his game but outgunned foe with powerful hooks, straights and uppercuts both upstairs and down. Just before the bell rang to signal the conclusion of the first round, Valenzuela was decked by a thumping left hook. The underdog was given time to recover in the third after being caught by a low punch, but the reprieve did not last long. Following a pounding series of unanswered strikes from Berchelt in the sixth, referee Cesar Castanon halted proceedings at the 1-13 mark.

If Berchelt has his way, it won’t be long before he is sharing a ring with Oscar Valdez – the ex-WBO featherweight boss who is now operating up at super-feather. “It’s time for me to box Valdez,” Berchelt declared. “The fans have asked for it and I’m ready for that war.”