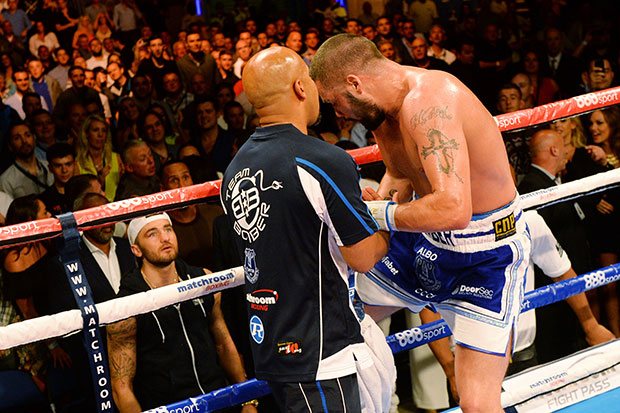 I TUNED into the Liverpool show at the weekend and thought I would have a look at some of our talent on the show. Anthony Ogogo and Wayne Reed were first up, and Anthony looked sharp and relaxed, and he showed good concentration rather than his usual laid back self. Reed is a tough uncompromising fighter was a good test for Ogogo, who picked his shots and was breaking Reed up slowly before stopping him in the fifth round. I think Ogogo still has a way to go before reaching the top of the tree.

Luke Campbell, though, I don’t think will get to those top branches of the tree. I am still not impressed by him, he lacks power, fast hands alone will not win a world title. I think his movement is very amateur and his repertoire of punches is not in abundance. I feel he should have stayed as an amateur in the GB set up, earning respectable money and going for an Olympic gold again in Brazil. If he won a second gold medal he would become a legend which I fear will not happen to him as a pro.

On to Stephen Smith versus Pedro Naverrete from Mexico. I thought ‘Swifty’ looked a bit tense boxing in front of his home town supporters, he got caught with some good right hands from Pedro, and although he won easily enough, he didn’t look world class against a tough rugged Mexican, and I would like to see him step up further in class before a shot at one of the major world championships.

Matt Skelton provided a great learning fight for Anthony Joshua’s apprenticeship. Skelton, although a bit long in the tooth, knew his way around the ring as a former champion of great experience, and Joshua had to get his head right before he got into the ring, wondering what Matt had left in the tank. Joshua showed in the first round that he was not going to be intimidated and kept his head when Matt launched into him, and even landed a few. Okay, it was only two rounds again but it was two rounds of experience that was worth eight rounds to Joshua, stepped him up a bit in class, kept him busy but didn’t burn him out.

Alejandro Valori gave Nathan Cleverly a bit of a test, although limited, he did try his best and got through on occasions with the left hook to the body and left uppercut, but Cleverly worked him over to the body and that’s what finished him in the fourth round. Nathan needs a step up in class now, and will surely get that if he meets Tony Bellew in his next fight. Bellew kept his side of the bargain by beating Julio Cesar Dos Santos. Bellew looked good in the first round, slowed a bit in the second, third and fourth rounds, a slow start to the fifth round, and then POW, a left hook and Goodnight Vienna. Bellew has inched in front on the betting stakes for me in his proposed clash with Cleverly – he looked a natural cruiserweight but I still wouldn’t bet on the result, even using   your money. There was a bit of afters between them but I am not a fan of all that bull****. It’s not about boxing, it’s about what the promoter wants, so as to sell those extra seats. It doesn’t sit well with me and I can’t see it as a good advertisement for our sport, or role models for our kids.

It seems the fighters need to hate each other before they can have a tear up – the same situation is happening with Dereck Chisora and Tyson Fury and my thoughts are the same. Do the public need to see the fighters trading insults before they decide it’s going to be a good flight?

On a lighter note I was on holiday a couple of weeks ago, sat on the beach in Tunisia with my wife when a guy came up to me and asked me if I was Mickey Vann the referee. I first asked him if Mickey owed him any money before I owned up to the name, and as it turned out I had refereed him a few times, and in 1983 I’m afraid I disqualified him. It was welterweight Mark Davey! We reminisced for a quarter of an hour, said our goodbyes, and afterwards I thought to myself what a great sport that I have been privileged to take part in.

They are the stories I like to read about – not the bad mouthing between two fighters.