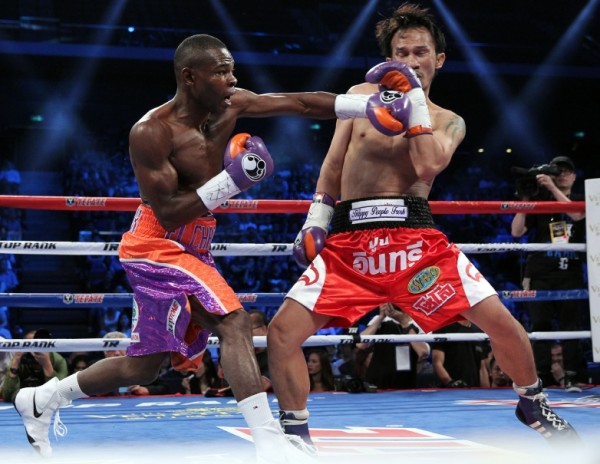 Kokietgym should have brushed himself down and given everything, it was a world title fight after all

THERE wasn’t a lot going on this week but that is to be expected at this time of the year, so I thought I would catch up on Guillermo Rigondeaux defending his world super bantamweight title in against Sod Kokietgym.

Guillermo defended his title successfully with a first round stoppage. Sod, who was the challenger, brought it on himself with his lack of concentration, a pair of balls that were not big enough, and crying like a baby instead of biting on the bullet and getting on with the job in hand.

Let’s start from the beginning, the bell sounded, there was the weighing-up of what was in front of them and some fast hands from Rigondeaux with Sod jumping in and countering. About the middle of the round Sod leapt in, and there was a clash of heads with Rigondeaux. Sod turned away and went down, referee Mark Nelson seemed to acknowledge it was an accidental clash of heads, and after Sod had had his check up from Mark, he was told to box on where upon they touched gloves. And then Rigondeaux hit him a couple of times and he went down and rolled over theatrically, got to his feet and was stopped. Miraculously then with seemingly no after effects, carried on complaining, pointing to his eyebrow, which wasn’t cut, did not seem to have any swelling, and for my money made himself look a right doughnut.

What I cannot understand is why a fighter, with little chance of winning, does not get in the ring and say to himself: “I am going to give everything I have tonight, and maybe pigs might fly and I get to win, but if not I am going to go out there and enjoy the greatest time of my life doing something only one in 1 million get to do.”

Deep down he will know he will never get another chance, he was just a silly Sod.