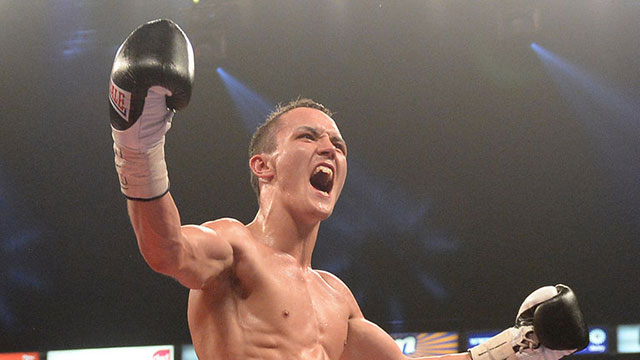 Vann also looks again at the scoring of Abraham-Smith, and ahead to Joshua-Bakhtov

WELL it looks like we have another star in Josh Warrington.

It was a comprehensive performance from a steadily growing 23-year-old triple titlist from Leeds who seems to be pulling the crowds back in to the arenas in Leeds. I remember four fights ago when I was writing about Josh – I recall saying that he lacked power and that could be a problem when he steps up in class. Since then he has had three fights, won three championships and stopped all of his opponents, he seems to have got the power from bending the knees more, instead of arm-punching. He doesn’t have to rely on work-rate alone now and is looking good for the future.

But it would be wrong to take too much notice of the media who are all ready talking about him fighting for the world title. His performance was awesome, and he seems to improve with every fight, but as with Anthony Joshua, he needs to further his apprenticeship. Give him another 12-to-18 months, and three or four more fights against sterner opposition from the other side of the Atlantic, and he will have a great chance to win the world title – any earlier would put that chance in jeopardy. If Josh keeps exciting the fans then we could have those heady days of former super-middleweight contender Henry Wharton back again. When Henry fought the crowds packed, at the Town Hall or the York Arena, but in Leeds have the new arena – a 10,000 seater – and it looked as if Josh had put approximately 6,000 bums on the seats, but the crowd sounded like one of those nights when Ricky Hatton was fighting.

There was not any need for the judges’ scorecards this week so I suppose that stopped any controversy but talking of controversy let us just nip back to last week and the contentious scoring of the Arthur Abraham-Paul Smith fight.
I was reading Bob Mee’s ringside report, with the headline “Poor Reflection”.
Bob says the first time he saw the fight he had it 114-114 score, then he decides to have a look at the replay and scores the fight 115-113, taking points off Smith and giving it to Abraham, then looking again and having a good think, he decides the worst it could be for Smith is 116-112 against.

The point I am trying to make is that Bob has plenty of time to score, and re-score, and to put his point over. A judge, though, has at the most 10 to 15 seconds to decide who won the round, and write the score down, and hand it up to the referee, who then takes it to the supervisor. And in IBF fights you have to write on the back of the next scorecard why, in a few words, the reason you scored the round in that fashion. So if you take Bob’s last score, he is only one round away from the other two judges. It’s just an observation.
There are the makings of a good show coming up at the O2 arena in Greenwich next Saturday with Anthony Joshua against the very experienced Denis Bakhtov. It’s a good tough learning fight for Anthony, and I am expecting him to come out a winner, but whether it will be inside the distance I wouldn’t like to say.