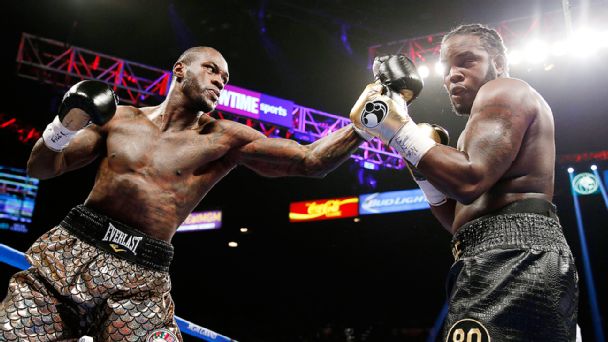 Mickey Vann not overly impressed with Deontay Wilder, but has sympathy for Richie Davies

I DECIDED to watch the WBC heavyweight title fight between Bermane Stiverne and Deontay Wilder, and to be truthful, I was a touch disappointed with the fight and the fighters.

Stiverne’s tactics seemed to be to march forward for the first 10 rounds with his gloves held high – in a poor man’s Floyd Patterson peek-a-boo style – and let Wilder hit him in the hope that after 10 of the 12 rounds Wilder’s arms would be tired, and he would knock him out. However, Wilder jabbed his head off, added the odd right hand, or threw a left hook instead of the single jab. I thought Wilder needed to double up on the left, then a right through the middle and add a left hook to the body for good measure. Any combinations at all, in fact, and not just a single jab that in effect is only the range finder but he seemed to me to be bereft of ideas and both were just happy to plod on. It reminded me of Tyson Fury’s rematch with Dereck Chisora, but at least Fury added the finishing touches. Wilder’s jab will trouble Klitschko but I don’t think it will be enough trouble to beat him. I would also fancy Fury to have a good chance on that showing, but Anthony Joshua as talented as he is still needs a few more fights against better opposition – hopefully the Kevin Johnson fight can be rearranged when Joshua recovers from injury.

On a different note I was sad to hear my friend and referee Richie Davies has decided to quit refereeing and judging after becoming disillusioned with the British Boxing Board of Control and their treatment of him. I am not going to criticise him, or the Board – Richie was a very highly respected referee and I believe only a couple of years ago was voted referee of the year by the International Boxing Organisation. Speaking to Richie at the weekend he cited the start of his problems as his three-month suspension for attending the 2012 West Ham show featuring Derek Chisora and David Haye with his wife as a spectator. Things didn’t improve after his three months out. I refereed Liam Walsh in a WBO championship on the same show and know that other British license holders, such as Liam, Matthew Hall and even the late Dean Powell were working on the show and received no recriminations. It is a shame as he still has lots to offer but I can sympathise with him after the treatment I have received from the Board. I wish him luck for the future and with Grant Wallace, Mark Curry, and Mark Green also calling it a day there will be no need to suspend their officials as there will be very few left.