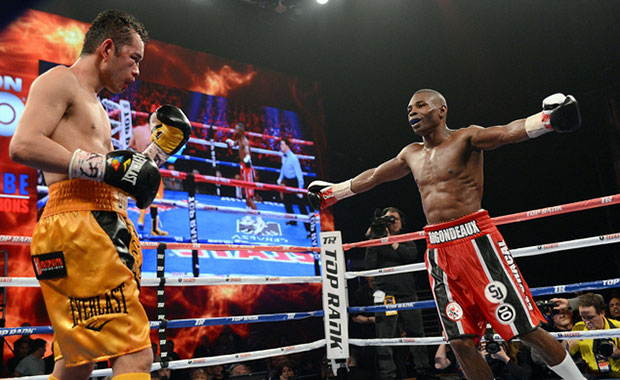 Neither Frampton nor Quigg can call themselves world champions until they topple Rigondeaux, writes Vann

IT’S been a quiet time these last couple of weeks over here, although we had that great result with Kell Brook, not the most exciting of fights but the result – beating IBF welterweight champion Shawn Porter – was a shot in the arm for British boxing.

If you want a guarantee of a good old punch-up look no further than a week on Saturday in Belfast. We have a boxer against a puncher, although Carl Frampton packs a reasonable punch himself, but Kiko Martinez is regarded as the puncher. I know Carl has a good win against Kiko from their previous meeting but the Spaniard has mixed in useful company since then and also picked up the IBF super-bantamweight title. He is not averse to fighting in the opponent’s backyard, in fact he crossed the Atlantic to stop Jhonatan Romero, who was an accomplished boxer, and also unbeaten.

I also recall Martinez fighting in the O2 in Dublin where he knocked out Bernard Dunne in the opening round – I was an unused judge on the fight. Since then, although well beaten by Rendall Munroe, he has learnt a lot and is not as gung-ho in his approach, so Carl will have to be at his best to contain him again. The week after that, we have Scott Quigg, perennially mentioned alongside Frampton, defending his small portion of the super-bantamweight title.

In last week’s issue of the Boxing News there was a really good feature from Irish manager Gary Hyde lamenting his plight of trying to get fights for his super-bantamweight champion, and undisputed division leader, Guillermo Rigondeaux. Presuming Frampton beats Martinez a second time, we will have two British fighters with portions of the super-bantamweight gold, and we have an Irish manager with a fighter who owns another portion who can’t get fights for his charge. So it should follow that if Frampton and Quigg want to be regarded as the best, they have to try and unify the titles. If there is not enough money on the table, fight a winner takes all; each fighter considers himself the best so he must take that chance.

I am sure Rigondeaux would fight either of them in their own back yard, so the venue will not be a problem. The purse won’t be a problem because the winner gets the lot, and all three of them think they are the best, so the winner gets two good paydays, and the two losers aren’t as good as they thought they were, and we have a real world super-bantamweight champion who has strong links to Britain, and Gary Hyde has got the fights he wanted for his brilliant Cuban.