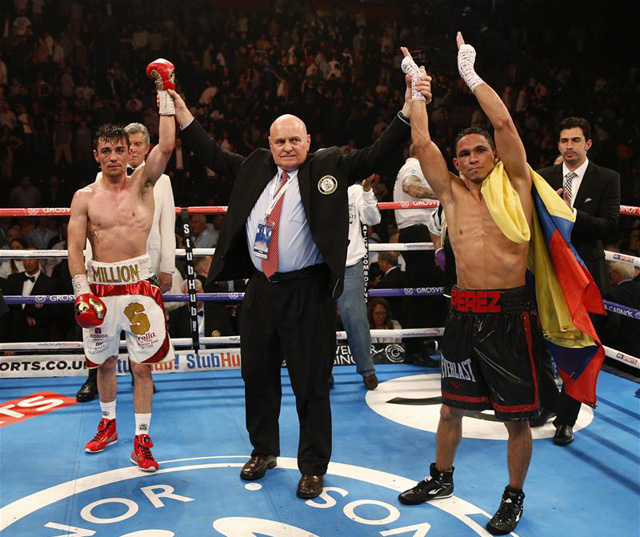 NOT a week goes by when we don’t have an outcry on the validity of boxing judges’ scores.

This week it is the unfortunate Anthony Crolla who put in a gigantic effort but just didn’t get the nod. I thought it was a close fight, and Darleys Pérez also had two points deducted which added to the intrigue. Looking at it dispassionately, there were three neutral and highly respected judges, Anthony Crolla was coming off an injury received in a traumatic event and had the support of everyone before the fight had even started. Then we had the two-point deduction and everyone assumes that will seal the win for Crolla, but it was just two points. Fighters have come back from knockdowns (and 10-8 rounds in their opponent’s favour) to win decisions; just because a fighter loses points doesn’t make it a certainty they then lose the whole fight. After all, a fight can last for 12 rounds, and a lot can happen in those 36 minutes that might have been forgotten by observers at the final bell. I feel that Anthony Crolla fought a tremendous fight – that could have gone either way – and got an honest end of the decision. Of course I, like the rest of the country, would have loved to see him win but it just wasn’t to be. Maybe next time.

You are probably aware that I referee for the Boxing Union of Ireland and have been doing so for almost seven years as I had reached the retirement age with the British Boxing Board of Control, and so I have taken notice of the fluctuations of Irish fighters. Recently, they are not making life easy for themselves are they? It’s as if they need to create a handicap in fights to keep things interesting.

Think about it, Andy Lee fought Peter Quillin in his American back yard, wasn’t expected to win, so made things even harder for himself by letting Quillin knock him down as soon as the fight had started. Then we had Jamie Conlon with Junior Granados, who was regarded as dangerous, but after six rounds Jamie was pulling away, so to even things up he took a couple of counts. Then we had Carl Frampton on the doorstep of the Mexican border, fighting a Mexican not regarded as too dangerous but to make things somewhat more exciting he took two counts in the first round, and it certainly made for exciting action.

Joking aside, I was surprised to hear Carl say after the fight that he had weight problems to contend with, and I wonder if that is why he has turned down Eddie Hearn’s seven-figure purse to fight Scott Quigg. Two things I noticed in Frampton’s fight; the first being Carl hit Alejandro Gonzalez Jnr with a great left hook to the body that visibly shook him in the first round but never threw it again; and the second being the commentators in the studio over here said the referee was doing a good job apart from the low blows.

Well, I wasn’t so sure. Although he took a point off early on, he then seemed loathe to do anything again until he took another point off Gonzales Jnr late on. But by then Frampton was lucky not to be suffering from a fracture to the kneecap and in dire need of an operation for an artificial hip and a hernia. That was the only real call that the referee had to make so how does that equate to the referee doing a good job?