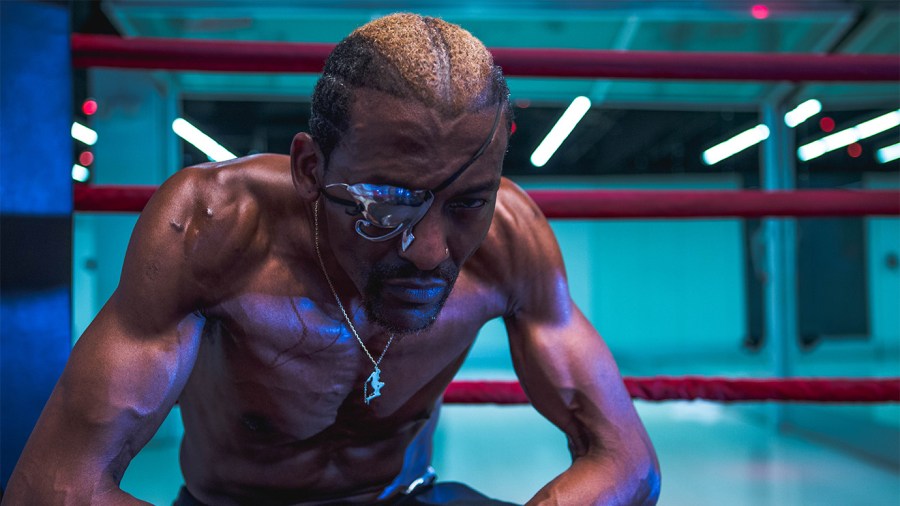 STOP me if you’ve heard this one before: a gifted boxer is lured to the big city with promises of fame and fortune; slick, handsome and packing a decent wallop, he rises through the ranks and gets a shot at the title; he loses, falls out of favour with promoters – and his dad – is forced to retire with an eye injury, soon runs out of money and is left thinking: ‘What on earth do I do next?’

I know, it’s not exactly original. But what if I was to tell you that this story has a happy ending? This kid who had it all – or thought he did – and lost it now trains super-models and Hollywood actors in his upmarket gym in Manhattan. Iman, Linda Evangelista, Will Smith, Hugh Jackman and Jake Gyllenhaal have all been taught to box by Michael Olajide, and he is the coach of choice for Victoria’s Secret lingerie models. I can think of worse ways to earn a living.

“I’ll be training this exceptionally beautiful woman,” says Olajide, “she’s sweaty and exercising hard, and I’m thinking, ‘I get paid for this? It doesn’t make sense’.”

Of course it doesn’t, because fairy tale endings don’t happen in boxing.

Born in Liverpool to Nigerian parents, and raised in Vancouver before moving to New York, Olajide was a Michael Jackson lookalike who went by the nickname “The Silk”. The American fight fraternity didn’t know what to make of him. Most assumed he was just a pretty face. The soubriquet hardly helped. “I got that all the time,” says Olajide, scrupulously polite and softly spoken, and with the very slightest hint of a Scouse accent. “I’d walk into a gym and see them looking at me, thinking, ‘Yeah, right…’ I understood why, because you’re not intimidating anybody when you’ve got a nickname like ‘The Silk’.”

Olajide remembers one sparring session with a young English kid called Chris Eubanks, another outsider who learned to get tough in the gyms of New York.

“He came down to the gym on 12th Street. He was a talented cat, but it wasn’t a war, we more or less just looked at each other the whole time. I’m not even sure we threw any punches, but I do remember he wasn’t wearing a monocle.”

In truth, Olajide was always tougher than he looked. His dad, a former boxer from Lagos, worked in the Liverpool shipyards, and Olajide retains strong memories of his seven years in England – singing Glory Glory Hallelujah in school assembly, cats slinking across the walls of their terraced house, putting money into the TV. But when work dried up, the Olajides moved to Canada. Olajide only started boxing at the age of 16, in his dad’s gym in Vancouver. He won a Golden Gloves title and fought some top Americans, before the old man ran out of money and said, “Michael, you’ve gotta go pro”, which he did in 1981. Olajide built up a record of 15-0 and won the Canadian middleweight title, before a couple of victories over ranked Americans in Atlantic City brought him to the attention of the boxing sages at Madison Square Garden.

‘You can have plans and all the heart in the world, if you can’t see properly, especially as a reflex fighter, you’re compromised’

After a few more wins at the Felt Forum, the theatre within the Garden, Olajide was matched with “Dangerous” Don Lee in Atlantic City. Lee had a fearsome record of 25 wins, 24 knockouts and only one defeat, and was once in line to fight Marvin Hagler, but Olajide knocked him down twice before stopping him in the ninth. Eight months later, Olajide fought for a world title. His match with reigning Olympic champion Frank Tate, for the vacant IBF middleweight belt, was billed as ‘Glitter and Gold’ – glitter referring to Olajide’s part-time modelling career, gold referring to Tate’s Olympic medal. After Sugar Ray Leonard beat Hagler – a victory that ultimately rendered the middleweight leadership vacant – all three major titles were up for grabs, and Olajide was convinced he could win each of them.

As is usually the case in boxing, it wasn’t to be. At the Caesars Palace Sports Pavilion in Las Vegas, on October 10 1987, Tate knocked Olajide down twice on the way to a convincing 15-round decision. Olajide was praised for his courage in going the distance, but the consensus was that substance had triumphed over style. Olajide was left depressed and fearing for the future. Tate, unconcerned about his rival’s mental wellbeing, sent him packing with the line: “There was no way I was going to let a Michael Jackson lookalike take the title away from me. I have one thing more to say: ‘Michael, Beat It…’”

“When you’re undefeated, you think you’re never gonna lose. You think you’ll be prepared to go to hell and back to try and win any fight. But, in retrospect, I had no chance of beating Tate. There were so many things going on in my life. It was very hard between my father [and trainer] and me. On the surface it seemed okay, but it was a very difficult relationship. Also, three weeks before the fight, I suffered a severe cut on my hand. And I was fighting with double-vision, so having to calculate two punches at once from the left side.”

Olajide had been seeing double for over a year, ever since a young buck with something to prove nailed him with an uppercut in sparring at Gleason’s Gym in Brooklyn, not long after Olajide had entered the top 10 in the rankings.

“After that, everything I saw out of my right eye was double. It did have an advantage, in that it made me keep my chin lower, because I was able to fuse images at the top of my gaze, but not from the middle down. I try to see the positive in any situation! But you can have plans and all the heart in the world, if you can’t see properly, especially as a reflex fighter, you’re compromised.”

‘The game takes a chunk out of all of us’

In 1988, Olajide was stopped by Iran Barkley, another boxer with a gammy eye. In those days, says Olajide, a medical consisted of clamping a hand over each peeper and parroting some numbers. Olajide floored Barkley in the fourth, but was sent sprawling by a strafing left hook in round five – “I ducked the wrong one” – before the referee waved the fight off, with the lanky Olajide swaying violently from his boots, like a palm tree in the path of a violent storm.

In his next fight, Barkley knocked out Thomas Hearns to claim the WBC middleweight title, while Olajide’s career appeared to be over the following year, when he dropped a split decision to Dennis Milton. However, in the peculiar way boxing works, Olajide’s next fight was against Hearns, now the WBO super-middleweight champion and coming off a draw with Leonard.

“Nobody outboxes Hearns – he outboxed Virgil Hill, who was a great boxer, at light-heavyweight. And to beat Tommy, you have to walk through the hurricane. There are different types of punches: Barkley was a clubbing puncher, heavy-handed. But Hearns’ punches were like being hit with a mace, like knights used to swing around their heads. He had these skinny, long arms but his fists felt like one of those metal balls with spikes on. And you don’t see Tommy’s punches on the way in, you just sort of see them on the way out.”

Against Hearns, Olajide, who had Angelo Dundee in his corner after splitting with his dad, came off his toes too late and the champion won via a decision.

As a topical aside, Hearns-Olajide was the first fight to be staged at Donald Trump’s Taj Majal Hotel and Casino in Atlantic City. The pre-fight press conference was packed, but mainly with tittle-tattle merchants, wanting to ask Trump questions about his reported split with wife Ivana. After the fight, Trump popped into Olajide’s dressing room to check he was OK, an act of kindness that shocks Olajide even more in hindsight than it did at the time.

“I was like, ‘Really?’ I’d fought for a lot of promoters, and not one of them had visited me in my dressing room after I’d lost and said, ‘Hey, anything you need’. So when I see what he’s doing today, I think, ‘Wow, what happened?’”

Olajide had one last fight before hanging ‘em up and stepping into the unknown. Still only 27, skint, blind in one eye and not yet an American citizen, Olajide was weighing up his options – a job at McDonald’s or returning to Canada – when he got a call from Bruce Silverglade, owner of Gleason’s Gym. Soon after, Olajide started a shadow-boxing class at a friend of Silverglade’s gym, making him an early pioneer of what we all now know as boxercise.

“The papers got wind of it and Equinox [the luxury fitness and gym company] said they’d love to do the same in their gym. I moved to Equinox, and it evolved from there. I choreographed a play that had great reviews, we moved on to fitness videos, and in 2004 I opened up my own spot, Aerospace on 13th Street [with business partner, former ballerina Leila Fazel]. That’s when the models caught on and boxing for fitness took off with the public. They’d see [Brazilian model and actress] Adriana Lima jumping rope on TV, throwing combinations on the pads, and suddenly all these ex-boxers were getting employed, because everyone in the world wanted to box.”

Olajide was soon being tapped up by production companies and directors, including Spike Lee, and trained Will Smith for the movie Ali, Lieb Schreiber for Chuck (about former heavyweight contender Chuck Wepner), and Hugh Jackman, who Olajide says has real talent, for Real Steel. He recently opened a second gym in Los Angeles, and was beasting Adrienne Warren, the star of a new musical about Tina Turner.

Olajide, 54, is married to Mary Ann, a graphic designer, and has two sons, one in Naval Academy, another who graduates this year. But it is heartening to relay that despite his new life – of solid domesticity, hobnobbing with film stars and working lingerie models into a lather in his gym – he genuinely seemed to enjoy tripping down memory lane and was thankful for the interest. “Every fighter likes to think they’ll make millions and retire undefeated like Floyd Mayweather, but the game takes a chunk out of all of us,” says Olajide, who wears a rather fetching patch over his right eye, and not as an affectation.

“But I love boxing, it’s the perfect sport. Everything that happened in my career was worth it. Because of boxing, a lot of beautiful things happened.”

Heard the one about the boxer who retired and lived happily ever after? Well, you have now.

Ben Dirs was a journalist for the BBC Sport website for 16 years, during which time he covered countless big fights and interviewed most of the biggest names in boxing. He has also written 11 books, including <em>The Hate Game: Benn, Eubank and British Boxing's Bitterest Rivalry</em> and <em>Box to Box</em>, the autobiography of Curtis Woodhouse.