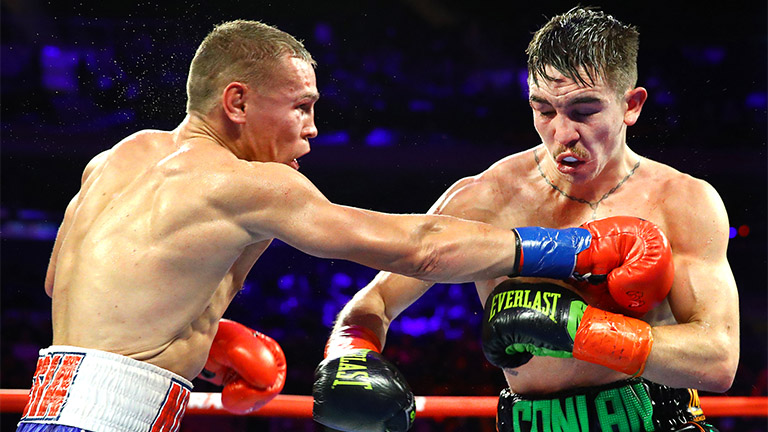 In his own words, Michael Conlan, the Boxing News prospect of 2019, looks forward to the year ahead

YOU could say 2019 was the best year of my career, in terms of what I’ve done. It’s been special, the atmospheres I’ve fought under. I think I’ve performed really well and I’ve ticked a lot of boxes. It’s just set me up for an even bigger 2020. I’m happy with how everything has went and I think it’s all going in the right direction.

No matter what I say, and no matter what happened in terms of Rio and stuff, Vladimir Nikitin has still had his hand raised against me twice. No matter what we think, no matter what everybody else thinks, his hand was still raised. Psychologically, subconsciously, that’s going to have an effect. That was all playing in the back of my head because I didn’t want it to happen again. It kind of made the training a whole lot easier because I didn’t feel I needed to get up for anything. I had all that motivation.

That was the first one as a pro where I actually felt scared, basically. Because before, in the build up, I felt nervous. It made me train harder. I think you need that. I need that kind of nerves, I probably don’t get it enough.

It had been the main talking point of my pro career, when it was going to happen, whether I was going to destroy him. People were expecting it to be an easy fight at times and expecting a walkover. I knew it wasn’t going to be like that. He’s a pretty tough opponent no matter what his pro record was saying. I know him from the amateurs, I know how good he is. You wouldn’t win what he’s won if you’re not good.

In the fight though I was able to control distance. He wasn’t as reckless as what he usually was. If he had been reckless I would have been able to catch him a lot more to the body. He’s actually very hard to hit the body but when he opens up you can get him to the body and I don’t think he wanted me to go to the body. So he adapted his tactics, made it a boxing kind of fight.

He’s tough and he always has been. In the amateurs he never stopped, he could take a good shot and keep coming.

It was high risk, low reward, zero reward really in terms of where it was going to get me in rankings. His record does do nothing for me really [but] it was good to answer a few questions of myself and tick a few boxes in my own head.

I know I’m fighting on St. Patrick’s Day this year.

Once St. Patrick’s Day goes well August 1 it looks like in Belfast for the big one.

I don’t depend on Shakur Stevenson or Josh Warrington. I know I’m on my own path and where I’ve got to get to, I’ll get there myself, whether it’s with them or without them.