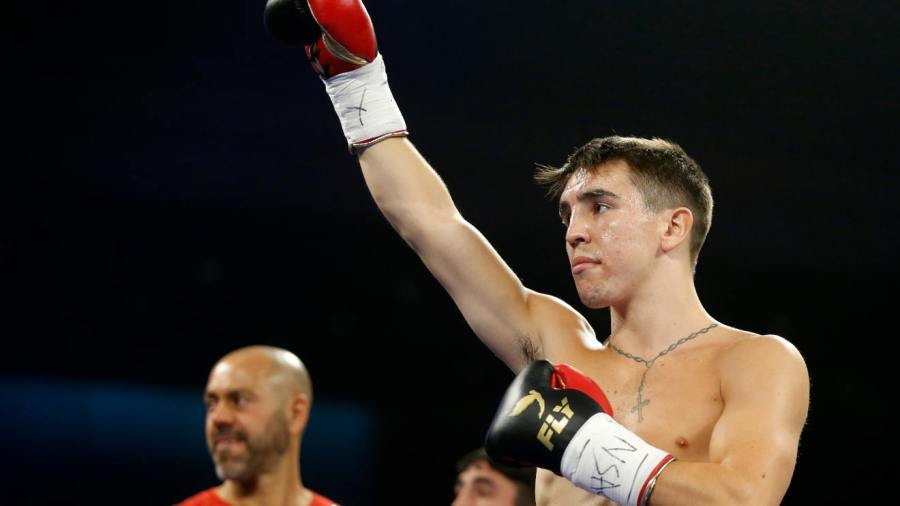 Michael Conlan tells Elliot Worsell that whoever comes next, and in whatever division, his dreams are close to being realised

HAVING defused the brave challenge of TJ Doheny at Falls Park on August 6, featherweight and super-bantamweight contender Michael Conlan is now considering which of those two weight divisions to campaign in. The popular Irishman, 16-0 (8) and ranked 10th at featherweight by BN, believes he is ready to fight for a belt in his very next fight and plans to begin assessing his options upon his return from holiday. At super-bantamweight, he remains mandatory challenger for the WBO bauble held by No.4-ranked Stephen Fulton (who fights Omar Figueroa on September 11), while at featherweight he has emerged as a potential opponent for No.9-ranked Leigh Wood, who holds one of the several WBA trinkets on offer. Victory over either will see Conlan’s standing improve significantly.

“I’m not sure what weight it will be,” Conlan, 29, told Boxing News. “The Stephen Fulton and Omar Figueroa fight happens on September 11, so we can wait and see what happens there and weigh up my options as mandatory challenger. The option at 126 [pounds, featherweight] is Leigh Wood. That’s another fight I really like. People say I can’t do 122 [bantamweight], but I can do 122, no problem.

For now, Conlan can take encouragement from knowing his recent decision win against Doheny in Belfast was arguably the finest performance of his pro career to date. Showing a bit of everything that night, Conlan boxed when he had to box, brawled when he had to brawl, and stifled the advances of an opponent who has already reached the heights Conlan himself is looking to soon climb.

“I’ve always said that the better the opponent, the better the performance, and I think that’s always been the way with me,” Conlan said. “The fact that there was someone there actually trying to beat me up, who came in after a full 15-week training camp ready to do the job and in great shape, brought out the best in me.”

In the fifth round of their fight, Conlan clearly made an impression on Doheny by firing to the body, the impact of which left Doheny doubled over, with his knee touching the canvas. Instinctively, Conlan then set about Doheny, desperate to become the first man to stop his fellow Irishman, only to quickly realise it was perhaps more beneficial to bide his time.

“I knew how tough he was but I did think I had him,” he said. “Every time I hit him to the body I could tell it was hurting him but then, after he got up, I did the thing Adam [Booth, coach] hates which is try to take him out.

“Once he held on, I knew I wasn’t going to get him because I know how tough this guy is and I didn’t want to blow myself out throwing a lot of punches. He survived the knockdown and the second burst and now had got a hold of me. I knew there wasn’t long left [in the round] so I kind of moved towards the end of the round. There was no point standing there and trying to finish him.”

Better than finishing his opponent, Conlan instead settled down and showed new dimensions to his game. “The defence stuff is something Adam and me have been working on for a long time, especially when you’re in that kind of pressure bubble,” he said. “To be calm in that chaos has always been something Adam has forced me to do. I think it’s starting to show now.”

In the end, Conlan was thankful Doheny forced him to raise his game and show his best side. Against other opponents – lesser opponents – the need would not have been so great. “I knew he would have a lot of fight in him, especially with it being his first time fighting in Ireland,” Conlan said. “He had loads of fans there as well. I knew he would be battling until the end.

“He loves those fights and always has them. You even saw it against [Daniel] Roman. I thought he lost unanimously against Roman but it was a majority [decision] and when he was hurt was when he was most dangerous. I knew that as well. I expected it. He’s a tough dude and I have a lot of respect for him.”

In addition to gaining priceless fighting experience, Conlan continues to accumulate event experience every time he sets foot inside a boxing ring. In fact, it is fair to say these days Conlan looks as comfortable performing in front of a packed-out Falls Park as he would shadowboxing in an empty gym. “The madder these events have got, and the bigger they have got, the calmer I have got,” he said. “That one was probably the most I’ve ever enjoyed any of my fights.

“TJ’s a former [IBF] champion and people were questioning me. All right, I was favourite with the bookies, but in my head I was thinking, This guy’s a tough dude who has been in with some of the best. He will be there for the duration. There was no pressure on me because of that. I could just be myself and use my skill, which is what I should always be doing. But sometimes, in the past, I would get carried away with people saying I should knock this guy or that guy out and I would then try too hard for the knockout when I should be boxing. Nobody was saying that about TJ, though, which I think helped. I could box how I box and enjoy it. It felt so good.

“Also, TJ played the villain fantastically. He was talking s**t and trying to stop me getting in the ring. I loved all that. It’s part of pro boxing. It’s entertainment. It was the first time in my whole sporting career I’ve had fun throughout the whole fight. I said after one of the rounds, ‘I f**king love it,’ to Adam in the corner, and I really meant it.”