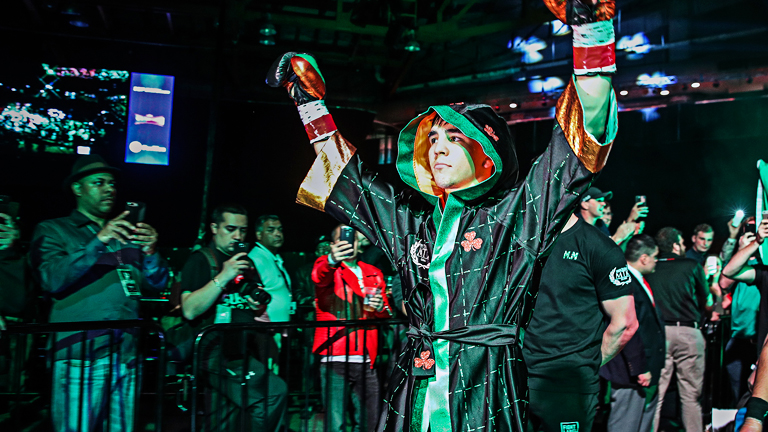 Michael Conlan on fighting Josh Warrington, his own plans and whether Top Rank are set for a UK invasion

BY August of this year Michael Conlan expects to be boxing for world honours. First though, on March 17 at the Madison Square Garden Theater in New York, the Belfast man fights Belmar Preciado.

“I can never take things like this for granted. When all is done, when the end of your career comes, these are the moments and the memories you’re going to have,” Conlan told Boxing News. “St.Patrick’s Day in New York, it’s something special and I love it.”

He is taking this opponent seriously. “People obviously don’t know him, because he’s not really well known but a dangerous, dangerous fighter. He’s part of [Miguel] Marriaga’s team, who’s actually fighting Shakur [Stevenson for the WBO featherweight title] the weekend before. He wings his shots, fast hands, good power,” Michael said. “I just have to be prepared and be careful and be ready for whatever he brings.”

“The division’s changing constantly,” he continued. “Gary Russell’s saying he’s going to move up to 135lbs so the WBC is going to be becoming vacant possibly. There’s going to be a lot of changes in the next few months but whoever’s champion at the time, whatever belt it is I’m fighting for, I’m ready. I’m calling for it. I believe this year is the year I’m getting the answers to those calls.”

He admires Shakur Stevenson and Josh Warrington, and would relish a title fight with either. He was due to fight Stevenson in the semi-finals of the 2016 Olympic Games, until a controversial decision in the quarter-final denied Conlan his place in the medal bouts. “[Shakur] is doing very well. He’s answering the questions that are asked of him,” Michael said. “We’ll see how far he will go and judge it at the end [though] there’s no criticism on my side.”

“If I was to face him I would have three or four different gameplans to beat whatever gameplan they came up with.

Conlan is promoted by Top Rank, as are other stars on these shores. Tyson Fury, Carl Frampton and Josh Taylor for instance are all in the same promotional stable. Conlan can see Top Rank coming over to stage shows in the United Kingdom.

“I think there’ll be a Top Rank UK soon. I have a feeling that’s kind of what might happen. But I can see Top Rank moving into the UK market. It would be huge. It would shake things up. Obviously with me already doing shows over here with MTK and Top Rank,” he said. “I can see big ones happening very soon and being solely Top rank. That would be great, I would be really interested to see that.”