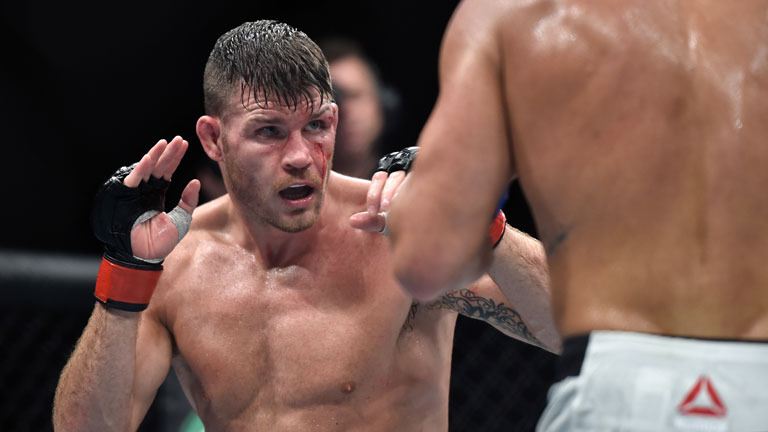 Michael Bisping eye is 'Functionally great', he tells Danny Flexen ahead of the Anderson Silva fight, while training has taken on a new dimension

IT’S kind of hard to ignore. His right eye looks off-kilter, the iris focused sideways almost into his nose. Michael Bisping eye does not look ‘normal’ – a result both of several surgeries to repair a detached retina suffered in 2013 and the injury itself – but the UFC middleweight insists, ahead of a crucial February 27 clash with Anderson Silva, that it will not be a problem in the fight.

“My eye is functionally great, there’s still a couple of things like there being oil in it but it’s stable,” he affirmed. “I don’t want this fight to be about an old injury.”

The detached retina was first sustained in a January 2013 battle with Vitor Belfort but Bisping fought again three months later and only had his first operation after his vision regressed to such an extent a scheduled October bout with Mark Munoz had to be cancelled. Interestingly, Munoz, now retired, currently serves as Bisping’s wrestling coach, one of several personnel changes “The Count” has made over the years.

“I now train predominantly at the RVCA Gym in Costa Mesa, California,” Bisping revealed to Fighting Fit. “It’s a private gym, you can use it by invitation only. My head coach is Jason Parillo; I worked with him for a number of years as he was my boxing coach. He is very, very experienced and a former fighter himself. My strength and conditioning coach is Scot Prohaska, a learned gentleman in sports science and sports performance training. I bounce all over Southern California, I get on the phone and offer good people a few dollars to push me; I want to move around with the best people I can. I do jiu-jitsu with Brady Fink at Misfits MMA and Fitness. On the wrestling side, Mark Munoz retired last year, and I started training at his gym prior to him shutting it down. It was a real good training environment with a good team so I was a bit bummed out, but now every Tuesday and Thursday Mark is helping me with my wrestling. He’s a phenomenal coach, he’s exceptional. He used to be Silva’s wrestling coach too so he knows in certain situations what Anderson is more susceptible to, but what would work for Mark might not work for me. It sounds good but when all is said and done it’s not that big a deal.”

Bisping’s new team is accompanied by a fresh mindset – the Brit turns 37 a day after the Silva match and has adapted his preparations as he has aged. Flexibility and mental strength have come to the fore.

“I’m now training smarter,” he asserted. “I have a hard Monday, an easy Tuesday, a hard Wednesday, a light Thursday, a hard Friday and Saturday morning. I mix it up to get the recovery work in. I used to go balls to the wall, overtraining and then you’re losing muscle and fatigue sets in. My main focus is my mind and body this time. I’m trying to get my body performing at its optimum level, so I have a flexibility coach who comes to my house twice a week. In the past I’ve neglected recovery and the pre-hab side of things. I’m doing a lot of flexibility and range-of-motion work. Mentally, I want to remain composed and relaxed while maintaining optimum physical performance. I’m an emotional guy and that has held me back in the past. I want to be able to read a situation and react accordingly. I’ve been working so much with Jason on that. Winning means so much to me that I stress out and it becomes detrimental. I become overly aggressive and predictable, load up on punches instead of letting them flow loosely. It’s hard to change but the more you do it the easier it gets. I’m already seeing the benefits in sparring.”