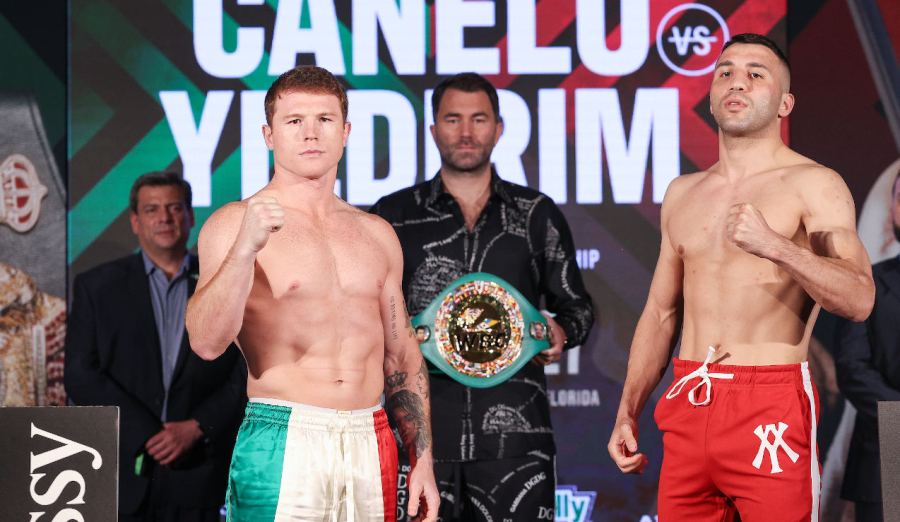 BECOMING an undisputed world champion is a difficult thing to do – especially in this day and age. Not only do you have to get into the ring and actually win the titles, but in the meantime you also have to keep four separate sanctioning bodies happy. The WBC, WBA, IBF and WBO each have mandatory challengers for their belts, and there comes a time when these obligations have to be fulfilled by their champions.

Four-weight world title-holder Canelo Alvarez and his team have made no secret of the fact that their target is to secure undisputed status in the super-middleweight division. The Mexican icon is already halfway there, having claimed the WBA and vacant WBC straps two months ago by unanimously outpointing Callum Smith. Billy Joe Saunders’ WBO and Caleb Plant’s IBF crowns are now in his sights, but first he has some admin to deal with.

When the WBC decided to award the winner of Canelo-Smith with their vacant title, they did so on the proviso that the victor would have to defend against their mandatory contender, Avni Yildirim, within 90 days. And thus we have this Saturday’s (February 27) mandated mismatch that is Canelo vs Yildirim.

“Against Yildirim, we take the next step in our journey to unify the super-middleweight division,” Canelo’s trainer, Eddy Reynoso, stated when the fight was officially announced five weeks ago. This, in a nutshell, is the sole reason for this bout. If Canelo wants to become the undisputed champion, then he has to avoid being stripped of his WBC belt. The only way to achieve this is to carry out his contracted duties in order to satisfy the WBC’s rules.

The decision to match Canelo, the No. 1 pound-for-pound fighter in the sport, with Yildirim, an unheralded challenger who is coming off a loss, has been met with widespread criticism from boxing fans. Taken simply as a sporting contest, this criticism is completely justified. However, when you delve a little deeper and take other factors into account, the fight – as an (A) event, (B) exercise and (C) assignment – can be accepted for what it is.

A) Event: In the current coronavirus-afflicted world, having the chance to watch boxing’s biggest star in action – either on screen via DAZN or live in person as part of the socially distanced crowd – should be appreciated. The Hard Rock Stadium in Florida – the home of the Miami Dolphins NFL team – obviously will not be packed to the rafters with fans, as it would be in normal circumstances, but any Canelo fight is a major event, regardless of the number of people able to attend and regardless of the opponent.

B) Exercise: If everything goes as planned for Canelo, this will end up being his second of four appearances in the space of just nine months – a refreshingly high rate of activity for an elite-level performer, especially during a pandemic. After Smith in December and Yildirim in February, Canelo is lined up for a unification clash with Saunders on May 8, before then facing Plant in September for the undisputed championship. That is the plan, anyway. As a keep-busy exercise – almost a glorified public workout – ahead of the serious tests soon to come, the Yildirim fight is not the worst thing.

C) Assignment: As mentioned earlier, Canelo cannot escape this contest if he wants to maintain his standing as the WBC champion. He knew as much when he won the belt. As his coach Reynoso pointed out, the fight is another rung on the ladder towards becoming the undisputed king. Viewed as an unavoidable assignment and necessary stepping stone to Saunders, Plant and all four titles, the bout – as uninspiring as it is on paper – is more palatable.

For Canelo, the matchup will mark the first part of a two-fight promotional deal with Eddie Hearn’s Matchroom – the second part being the slated May date with Saunders. The 30-year-old superstar had originally been hoping to face Yildirim in a homecoming fight in his native Guadalajara, but with COVID-19 measures in Mexico ruling out the possibility of any live crowd, this option was taken off the table. With the threat of complacency being his main danger in this bout, he is adamant that he will not be taking his unfavoured foe lightly.

“It’ll be a great night for the sport,” Canelo promised. “Yildirim is a good boxer and I know we’ll put on an exciting fight.”

Canelo vs Yildirim is available on DAZN. You can sign up HERE

As much as it is a routine engagement for Canelo, it is a once-in-a-lifetime opportunity for Yildirim to challenge the most notable name in the business. He is well aware that he has been written off by everyone outside of his own circle, but is determined to prove the world wrong and pull off what would undoubtedly be one of the most sensational upsets of all time.

“I’m honoured as a mandatory to fight again for the big green [WBC] belt,” Yildirim said. “I always give my all, and everybody should be ready to see a war. I’m coming to make my country proud – I’m representing the whole of Turkey.”

Currently ranked at No. 2 in the WBC ratings, Yildirim was installed as the mandatory contender following his defeat to Anthony Dirrell two years ago, due to the fact that it came in somewhat contentious circumstances.

In their fight for the vacant WBC crown, Dirrell suffered a nasty gash above his left eye, leading the referee to call the contest off – on the advice of the ringside physician – with just over a minute left in the 10th round. As the official deemed that the cut had been caused by an accidental clash of heads, the bout went to the scorecards, where Dirrell was awarded a technical split decision to become a two-time WBC titlist, much to Yildirim’s protestation.

Yildirim, 29, has not fought since losing to Dirrell, whereas Canelo has competed on three occasions during this same period – all at the highest level and each in a different division. A May 2019 unanimous points victory over Daniel Jacobs saw him unify his WBC and WBA middleweight belts with Jacobs’ IBF title. Six months later, he jumped up two weight classes to impressively dethrone big-hitting WBO light-heavyweight champ Sergey Kovalev with an 11th-round KO. This led on to the dominant triumph over previously unbeaten super-middleweight Smith.

Although Yildirim has been out of the ring since February 2019, his trainer, Joel Diaz, has argued that the extended break has been beneficial for his man, as it has provided the duo with ample time to work on things in the gym and strengthen their partnership. Though they teamed up 16 months ago, the Canelo bout will be their first fight together – quite the baptism of fire.

While Yildirim made his professional debut seven years ago, Canelo is now incredibly into his 17th calendar year as a pro, having turned over at the age of just 15 back in October 2005. The flame-haired maestro boasts bucketloads of elite-class experience, having defeated a long list of luminaries. His November 2015 unanimous points win over the vastly decorated Miguel Cotto – fought at a 155lb catchweight for the WBC middleweight title – was particularly memorable, as were his two titanic tussles with Gennady Golovkin.

His initial fight with Golovkin, in September 2017, ended in a disputed split draw, with the general consensus being that Canelo was fortunate to avoid defeat. Following on from this was a highly anticipated rematch 12 months later – once more for unified middleweight honours. On this occasion Canelo edged his fearsome, illustrious rival on a majority decision, taking Golovkin’s ‘0’ in the process, though, again, not everyone agreed with the outcome.

In an outstanding 54-1-2 (36) career, the only man to have beaten Canelo is the peerless Floyd Mayweather – the best boxer of his era. As shrewd as ever, Mayweather made the naturally bigger Canelo come down to a catchweight of 152lbs in their super-welterweight unification contest, handing an advantage to the savvy veteran. Knowing the youthful Canelo was only going to get better and better in the years to come, Mayweather picked him off at the perfect time in September 2013, earning a majority verdict that should have been unanimous.

Unsurprisingly, Yildirim’s CV pales in comparison to Canelo’s. The rugged Istanbul scrapper has lost twice in 23 outings (21 victories, 12 inside schedule), with his maiden reverse coming at the hands of Chris Eubank Jnr in an October 2017 World Boxing Super Series quarter-final. Going into the fight with an eye-catching 16-0 (10) record, Yildirim was expected to provide a stern assessment of Eubank’s credentials. Yet the ferocious Eubank had other ideas, as he blitzed Yildirim in just three rounds.

Yildirim’s last win came against Lolenga Mock in September 2018, but a majority decision victory over a 46-year-old is not exactly a result that will cause Canelo any sleepless nights.

As an amateur, the thickset Yildirim boxed in the light-heavyweight and heavyweight categories, including at the 2013 World Championships, where he participated as a light-heavy. He is three-and-a-half inches taller than the 5ft 8in Canelo, but has a slightly shorter reach (70ins compared to 70 1/2ins). Having performed in six different countries as a pro – including twice in America – he is well travelled and not fazed by fighting away from home. He applies relentless pressure on his opponents with his wild, brawling style, but this aggressive approach can also leave him overly open.

Canelo can be tagged too, but his alert upper-body movement often counteracts this, as does his iron chin. Strong, stocky and sublimely gifted, he shoots out sharp, swift salvoes made up of imposing jabs followed up by accurate uppercuts, hooks and straights. Comfortable either counterpunching or pressing forward, he is a patient and calculated operator who possesses an exceptional ring IQ and fight-ending one-punch power.

Up against the finest fighter on the planet, Yildirim may well show Canelo some respect by slightly tempering his usual gung-ho nature in the early going. After taking a look at Yildirim in the opener, expect Canelo to gradually move through the gears and begin to pound the underdog with damaging blows. As he starts to ship punishment, the gutsy and tenacious Yildirim will likely revert to type and attempt to fight fire with fire, which will play perfectly into Canelo’s hands. With Yildirim growing increasingly ragged, the pick is for Canelo to close the show in emphatic fashion in round four or thereabouts.

Canelo’s attention can then turn to Saunders and the penultimate stage in his pursuit of the undisputed title.

The Verdict Canelo has a clear goal in sight and the bit between his teeth, which spells trouble for Yildirim.

TESTING TIMES
Looking back at the drug controversies
CANELO and Yildirim have both failed drug tests in the past. In February 2018, Canelo twice tested positive for clenbuterol, which, he maintained, was caused by ingesting contaminated meat. While Canelo served a six-month suspension, Yildirim was not banned following his positive test in September 2019. DHCMT and methylclostebol were found in Yildirim’s sample, but the authorities ruled that he had been unknowingly exposed to the substances as part of a muscular inflammation therapy.