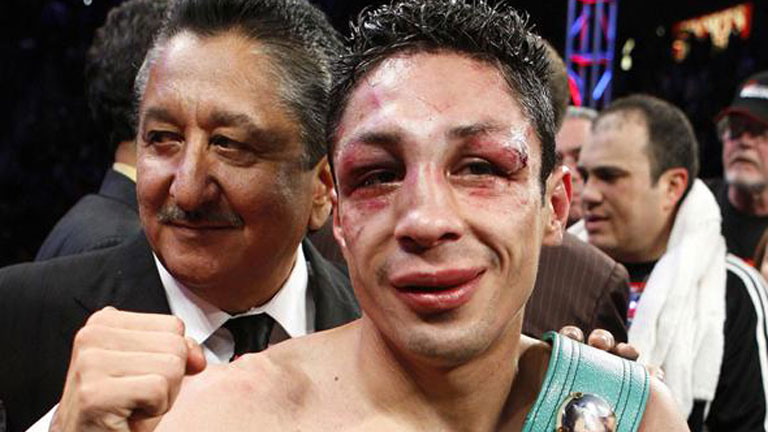 IN sad and somewhat disturbing news – the kind that illustrates just how much pro fighters risk during their careers – it has been reported by ESPN Deportes how retired Mexican warrior Israel Vazquez will soon undergo an operation to remove his badly damaged right eye. A prosthesis will then be inserted. The 38-year-old, a former IBF and WBC super-bantamweight champion who retired in 2010 after a fourth fight with archrival Rafael Marquez, is not feeling sorry for himself, and he says he does not wish to “demonise the sport”.

“The problem obviously arose after the last fight [of my career, against Marquez],” Vazquez said. “But I don’t want to demonise the sport or the fight, because this was an oversight by my physician and myself. I had many surgeries and one of them was to put silicone into my eye. I assumed that the doctors knew what they were doing, and at that time I did not recover my vision 100-percent, but I could live my life. What’s happened is, I can’t see with my right eye. I have made my life with my left eye and I have no problems.”

Vazquez – who retired with a 44-5 (32) record – was told he has two choices regarding his eye: wait for the right eye to “dry out”, which could take a number of years, or have the eye removed and a prosthesis put in. This second option is the one Vazquez chose and he is now awaiting the procedure.

“There is no set date, but we will see when we can do it,” Vazquez said. “I know that physiologically it won’t be easy but it is something that I will need to get used to.”

Vazquez stated how WBC President Mauricio Sulaiman has been helping him out at this difficult time. A great fighter in his day, Vazquez really did thrill fans with the first three of his four wars with Marquez. It was during these fights that Vazquez picked up substantial damage to both of his eyes. The fights were as brutal as they were entertaining and now, sadly, “El Magnifico,” as Vazquez was known during his career, is paying a big price.

Back in 2014, Vazquez spoke with Boxing News about his epic fights with Marquez:

“Rafael Marquez was very tough, no doubt about it,” he said. “He was a great fighter. Of our four fights, I’d have to say the second fight means the most to me. First of all, I got my title back (after losing the first fight to Marquez) and secondly, because I’d lost [the first fight] due to a broken nose. I came back and proved I was stronger than ever. I had no regrets over taking the fourth fight with Marquez. Yes, I suffered the cut [eye] but I also got cut in the second fight and I came back and stopped him that time.

“I have no regrets about my career [Israel said in 2014], the reason is, if things had been different, I wouldn’t be the man I am today.”

It would of course be understandable if Vazquez feels a little differently today.