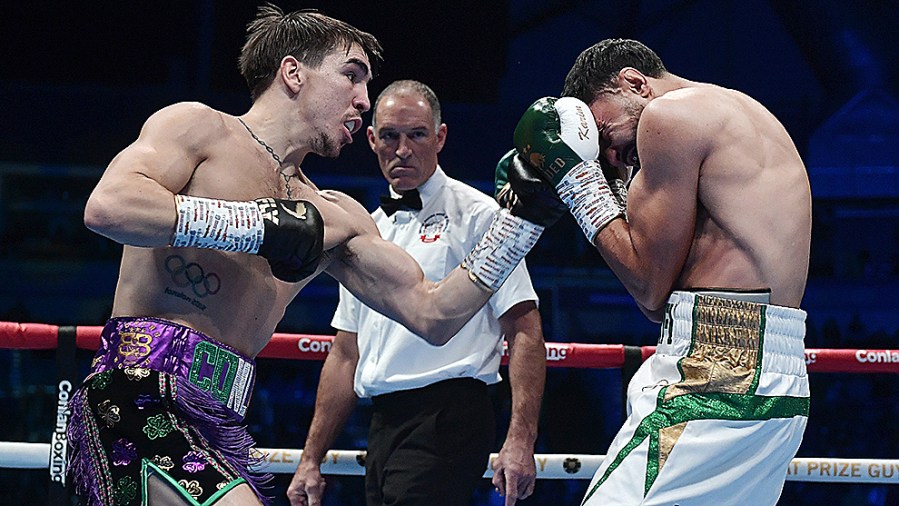 A resurgent Conlan feasts on Guerfi in Belfast, writes Joe O’Neill from ringside

‘HAPPY CHRISTMAS!’ declared a jubilant Mick Conlan as he gave his adoring fans an early present on a frosty Saturday night in Belfast.

Karim Guerfi was the unfortunate man to find himself on the Falls Road featherweight’s naughty list and the Frenchman was ripped apart inside one round at the SSE Arena.

The Conlan Boxing card had suffered some frustrating late hiccups – with bouts for Tyrone McKenna, Lewis Crocker, Paddy Donovan, and Paul Ryan all falling off the bill during fight week. However, there were no issues whatsoever for the man in the main event who ensured that the show was no Christmas pudding for the thousands in attendance.

Referee Steve Gray gave a classy tribute to the recently departed Mills Lane by proclaiming ‘Let’s Get It On!’ before the start of this 10-rounder and his intervention was required with just 2-45 gone. There was no Fan Man or bitten ears here though, just a demolition from the resurgent Conlan.

Boxing southpaw, the Adam Booth-trained switch-hitter began with vicious intent, digging to the body and backing Guerfi to the ropes with ease. The veteran appeared uncomfortable from the off and soon looked even more so as a piercing left hand from the Irishman stabbed into Guerfi’s solar plexus. With his discombobulated opponent slumping into the ropes, Conlan unleashed a barrage of bodyshots and the Frenchman slowly crumpled to the canvas. Rising quickly, Guerfi staggered across the ring, forcing Gray to grab him and call an early halt to proceedings

Throughout Conlan’s professional career it has been suggested that his punching power, or lack thereof, is a major flaw. This is perhaps overstated and he showed that he can be a cracker when he decked the Gaul with fists of fury. It was the finish that was missing in his four-knockdown dismantling of Miguel Marriaga last time out and, more importantly, after his huge first-round flooring of Leigh Wood in their Nottingham epic.

While serial European champion Guerfi is no doubt past his peak and operating above his optimum weight, he was no turkey, and a second outing inside nine months of the crushing Wood loss sees Conlan enter 2023 in solid shape. Speaking in the ring afterwards as Shakin’ Stevens’ rang out across the arena, the local favourite promised to return on St Patrick’s Weekend in a fight for a sanctioning body title – with reports that a clash with new beltholder Luis Alberto Lopez is already in the works.

Chief support saw Turf Lodge super-lightweight Sean McComb cruise past Zsolt Osadan. Dancing around the ring throughout the ten rounds and then when he had his hand raised by referee Marcus McDonnell, McComb had far too much class for the honest pressure of Osadan. Pirouetting away whenever the unbeaten Slovakian got close and rattling him with southpaw counters, it was a whitewash for McComb who took every round on the three judges’s scorecards (100-90 x3) in this vacant WBO European rankings belt fight.

His most complete performance as a professional to date, the languid McComb appears to have settled well into the 140lbs class following his Commonwealth lightweight title defeat to Gavin Gwynne last year. It will now be interesting to see whether ‘The Public Nuisance’ can prove to be a thorn in the sides of the big domestic names going forward.

Returning home to a hero’s welcome following his upset victory over Leon Bunn in Germany in October, St James’s light-heavyweight Padraig McCrory got the crowd going with an eight-round shut-out of Dmytro Fedas. The Estonia-based Ukrainian was an obvious step down for McCrory who was merely keeping busy ahead of bigger nights and this led to a messy encounter. ‘The Hammer’ looked to close the show early but was not as sharp as he had been in his recent run of major match-ups and Fedas evaded much of the initial onslaught. A nasty gash over McCrory’s left eye in the sixth saw referee Hugh Russell Jr consult the ringside doctor but the home fighter was allowed continue and, perhaps jolted into action, dominated the subsequent stanzas to round off a comprehensive 80-72 win.

Continuing an impressive debut year, Tokyo Olympian and 2019 European champion Kurt Walker outclassed aggressive Nicaraguan Yader Cardoza with style. The Lisburn featherweight’s handspeed was just too much for Cardoza – who had challenged for the WBC light flyweight title back in 2013. The grizzled Central American tried to drag things into a brawl throughout the six rounds – much to the chagrin of referee Eamonn Magill – but Walker would not oblige and took a clear 60-54 win on the scorecard.

In an early attraction, Belleeks middleweight Fearghus Quinn dominated reigning champion Graham McCormack to take the BUI Celtic title. A well-rounded pressure fighter, Quinn did heavy damage in the early stages and, while his output slowed as the southpaw domestic progressed, he was still frequently landing big shots on the gutsy Garryowen man. Indeed, McCormack showed bravery beyond belief and would have kept fighting for 800 rounds, never mind the eight which the bout was scheduled for, but he needed saving from himself. Referee Padraig Ó Reachtagáin made a visit to the corner for some words following the conclusion of a rough fifth and, with 36 seconds of the sixth gone, the towel mercifully came in.

Oughterard welterweight Kieran Molloy turned heads once again with a destructive dismantling of Alexander Zeledon. The visitor had provided high-profile Geordie Joe Laws with some issues the previous week but Molloy ripped through him here. Following two punishing rounds, the Nicaraguan’s corner indicated No Más and Mr Magill halted the contest. Scheduled for six here, the Top Rank-promoted Molloy looks set to move into BUI Celtic title contention and to bring professional boxing back to Galway city for the first time since 2009.

Opening the show and having his third outing in three months, talented Falls Road super-fly Conor Quinn had a largely processional win over Manchester journeyman Stephen Jackson. Far superior, ‘The Magnificent’ Quinn strolled through the six rounds versus the ambition-less Jackson, eventually claiming a 60-54 win on Mr Magill’s card.