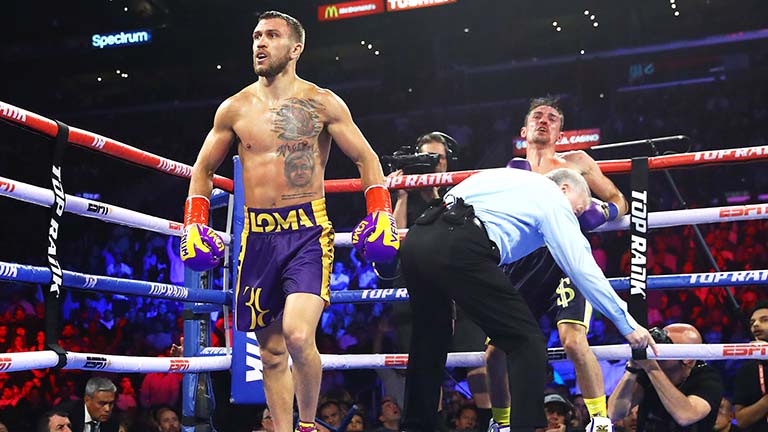 THE gulf between Anthony Crolla and Vasyl Lomachenko was clear. The Ukrainian outclassed Crolla in four rounds when the two met, Friday, at the Staples Center in Los Angeles.

Moving forward aggressively Lomachenko showed no mercy. In a display of offensive counter-punching, the WBO and WBA lightweight champion advanced, peppering Crolla with constant jabs from the southpaw stance. Anthony lunged at him, only for Lomachenko to bound clear, let the Mancunian’s shots fall short and at once resume his punishing attacks.

Crolla was left retreating anxiously but not quick enough to escape the in form champion. Lomachenko lined up his prey and tagged him with fast, accurate crosses. Those punches were vicious, as soon as Anthony moved Lomachenko fired his left into a crack in his guard. At the end of the third round, he trapped Crolla on the ropes and opened up with a salvo of hooks, rocking Crolla all the way into the strands. The ropes kept him up and referee Jack Reiss took up a count.

Moving nimbly round Crolla’s punches in the fourth round once again Lomachenko attacked the body and the head. Lomachenko nodded at a defiant right hand, stepped in and sent out the left and finished the attack applying his right hook to the top of Crolla’s head. The Briton plummeted headlong to the canvas, knocked cold, the fight stopped after just 58 seconds of the fourth round.

“I want to unify all titles,” Lomachenko declared. “”I want to fight with Mikey Garcia [who holds the WBC belt], but we’ll see. I don’t know.

On the undercard WBO super-middleweight champion Gilberto Ramirez had his first bout at light-heavy, with Tommy Karpency retiring on his stool after four rounds. “I feel more comfortable at 175 pounds than 168,” Ramirez said. “I’m looking for all the champions at 175. I want to be a pound-for-pound fighter.”