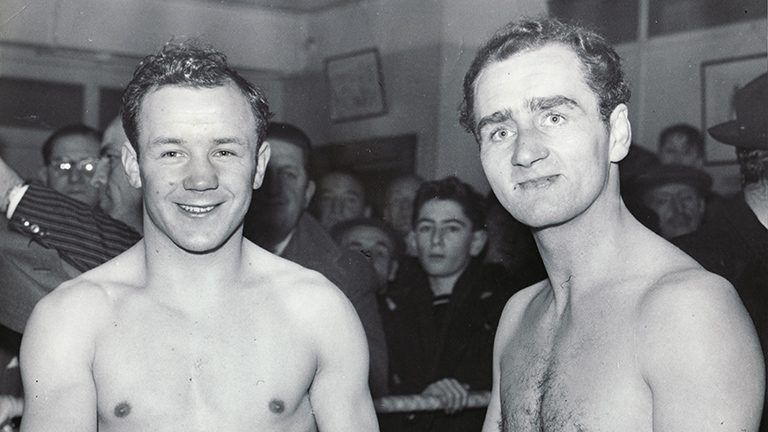 'I always wanted to box but I was always very frightened, very nervous. But I overcame it the way you overcome things, I started doing it.' Alex Daley remembers the impression Sammy McCarthy made on him

AT the time of his passing – last Monday (February 10), aged 88 – “Smilin’ Sammy” McCarthy was our oldest former British champion. He had fought in the age of Robinson, Marciano, Moore, Sadler and Pep – an era of one world champion per weight, when boxing enjoyed mainstream popularity and British titlists were household names. Sammy was among the best-known British champs of the 1950s – his immaculate boxing style and unpretentious manner made him a hit with the fans. But to anyone lucky enough to have known him – even just briefly, as I did – he was so much more than the sum of his fights.

Intelligent, softly spoken, warm and articulate, Sammy was the antithesis of the non-boxing fan’s stereotype of a former pro boxer. When I interviewed him for my book, Fighting Men of London, I was dazzled by his openness and sincerity. He told me: “I always thought as a little boy that the more you could fight the more masculine you were. But of course you realise when you get a little older how ridiculous that is. I always wanted to box but I was always very frightened, very nervous. But I overcame it the way you overcome things, I started doing it.”

Born in Stepney, east London, on November 5, 1931, Sammy started boxing after returning from war evacuation in 1945. As a senior amateur he went from success to success and was British boxing’s “Golden Boy”. Each time he fought a dozen coaches were laid on for his army of devotees. There was even a Sammy McCarthy fan club.

After turning pro at age 19, he reached 20-0-1 in his first 18 months and then beat the reigning British featherweight champion, Ronnie Clayton, in a non-title fight. It took another 18 months for McCarthy to get his shot, and in the meantime he lost decisions to three world-class operators: Hogan “Kid” Bassey, Ray Famechon and Jean Sneyers. He was none the worse for these losses, however, and stopped Clayton in eight to claim the British belt in June 1954.

Sammy lost his crown in Belfast the following January to Billy “Spider” Kelly, but a sleepless night (caused by a horrendous overnight sea crossing) and an injury to his right fist meant he was not at his best. Moving to lightweight, McCarthy beat the reigning British champ, Frank Johnson, emphatically in his first fight at the weight. However, Johnson’s crown wasn’t on the line and Sammy lost a title challenge to Frank’s successor, Joe Lucy, in June 1956. Having defeated some of Europe’s finest feather and lightweights, Sammy retired the following year, aged 25.

Sammy refused to make excuses for any ring defeat, even when an obvious external factor would have served as an alibi. Glorifying his achievements, or diminishing those of others, was just not his style. After legal transgressions and prison time (part of the McCarthy enigma and utterly at odds with his character), Sammy’s final years were spent largely in the service of others. As Vice President and a hugely popular member of the London Ex-Boxers’ Association, he routinely visited other ex-fighters and senior members of his beloved East End community who were unwell, often stranded in hospitals or care homes. Indeed, such was his devotion to this duty, it was rare to be able to reach the ex-champ on his house phone during the day.

I once asked McCarthy how he acquired his famous nickname, “Smilin’ Sammy”, and he told me, candidly: “I used to smile a lot, the reason being, I was so nervous and it was a defence thing.” I then asked why he still smiled just as radiantly and he replied: “Even on my lowest day I think it’s wonderful to be alive. I’m just happy to be here.” Sammy McCarthy, British boxing hero and thoroughly decent human being, will be dearly missed.