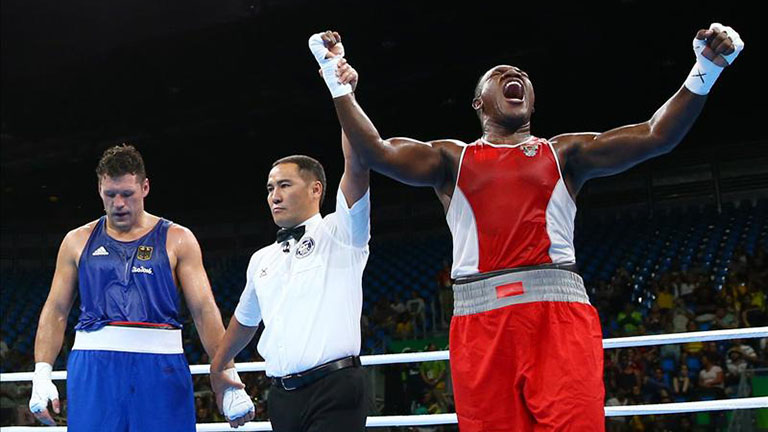 LAURENT CLAYTON entered the arena at Riocentro a major underdog. A super-heavyweight from the Virgin Islands he ought to have only been a tune-up for Germany’s Erik Pfeifer, a veteran at 91&kgs, who had qualified for the Rio Olympics by winning the AIBA Pro Boxing league.

But Clayton had different ideas. He met Pfeifer head on in the ring, outworked him and drove him back, winning a fair, if astonishing decision.

Clayton is the only heavyweight in his country and qualifying for these Olympics wasn’t easy. Speaking to Boxing News he said, “Boxing, the sport in my country is not a big thing. It was rough, I had to fund raise, go to different companies. I had to get money to fly to America, to Texas and I got training in Texas where I hooked up with a guy named Bulldog Dorsey and he took me around different cities in Texas. We’d just go into the gym and say, ‘Hey, I’m a super-heavyweight, I’m looking for some sparring to go to the Olympics.’ Everybody wanted to spar with an Olympian so that was a way to draw them in. That was it. Just practise and simulate and simulate. I practised with my coaches at home.”

His step-father is Julian Jackson, the two weight world champion, so he does have expert advice to support him. “It was difficult but with God everything is possible and I just kept working hard and I said, you know what, if I dedicated myself, if I sacrifice the rest is going to happen in the ring. I just take it round by round, fight by fight. The round is not won by one punch or one combination. It’s won by a series of combinations so I try not to lose my focus. Even if I got hit by a good shot I stay focused and I work on getting another shot back and just being sharp,” he explained.

Against Pfeifer he knew “that it wouldn’t be easy and I had to work hard for it and I knew that he wasn’t going to give me an easy fight because everybody wants to be an Olympic medallist, not just an Olympian and I know he didn’t come here to be beat a little guy from the Virgin Islands”.

It wasn’t easy and it’s only going to get harder. In his next bout on Saturday (August 13) he takes on the reigning World gold medallist, France’s Tony Yoka. But Laurent says, “I really don’t know much about anybody here, except for one or two guys,” Clayton said. “We are both men who came here from our countries and we are the best of our region. I didn’t qualify because I had a free pass, I had to win to get here. He won to get here. I respect him, I know that he’s a tough competitor, he’s a champion. I will go in, I will pay him my respect but I’m going to win.