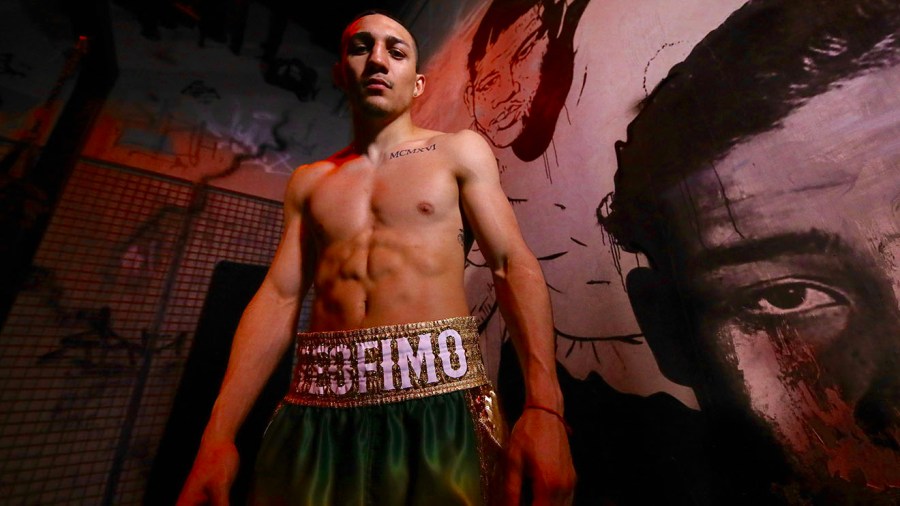 Teofimo Lopez sits down with Declan Taylor to explain 'The Takeover'

“I’M TALKING about a career that will go down as one of the greatest ever,” Teofimo Lopez says without a hint of intended hyperbole. “That’s my goal. That has to be my goal.”

It is now 16 years since he was anointed the “Golden Child” by his father, Teofimo Snr, and it is as if the Brooklyn-born lightweight has been living on fast forward ever since.

The story goes that the old man, a decent footballer and wannabe boxer, was making ends meet by working as a limousine driver and would often take his youngest son with him to train. One afternoon, he left the kid inside the gym as he attempted to find a space big enough for the lengthy vehicle.

On his return, six-year-old Teo Jnr was gloved up, hitting pads and clearly enjoying himself. “I learned two or three combinations in a matter of minutes that day,” Lopez tells Boxing News. “Even then it seemed like it was made for me.”

His father, too, was instantly convinced. Any outstanding ambitions of making the grade in competitive sport were swiftly reapplied to his son.

“When he saw me that day, that was it,” Lopez adds. “My dad decided to stop training for himself and to focus on me. He thought ‘I’m 30-something years old, what the hell am I going to do in the sport?’ By then, you’re too late but now we’re here together.

“My father has invested his whole life… he’s sacrificed everything for me. Now we’re here, I know he’s very proud of that. In Brooklyn he’d take me to Gleason’s and Red Hook and places like that. He’d take me everywhere, I’m his little boy.

“I’d watch him in the boxing gym but he’d also smoke and drink so he never really took it seriously. Once we moved to Florida, when I was about six, that’s when it all happened.”

His father has been at the heart of everything the youngster has done so far in the sport. The duo are a regular fixture at most big fight weeks in America these days, Junior the smiling, bright customer-facing Lopez while his dad can often be spotted, Teofimo Lopez hat on, stalking the place like a man with business to attend to.

It was Senior who pulled his son out of the education system in the ninth grade and decided that home-schooling would keep him from falling in with the wrong crowd. It is Senior who now tells anyone who will listen that his son can dismantle Vasyl Lomachenko inside a round.

“I’m often asked where I get my confidence from and it’s him. He always told me how good I am and then sooner or later, like a lightbulb, I got it. It kicked in.

“Now I’m just like my father in the sense that he feels the confidence in me and so do I. It’s not cockiness or anything, I just truly believe in my skills. It’s not a sport you can do without feeling like this. Now we’re right at the top of the food chain – well almost.

Lopez estimates he had around 170 bouts as amateur and his lengthy career in the unpaid ranks reached a conclusion when he represented Honduras at the 2016 Olympics but was eliminated in the first round. His flashy style did not always appeal to amateur judges but there was always a feeling he would be made for the pros.

Within months of returning from Brazil, Lopez signed a deal with Top Rank and began punching for pay. He has since stopped all but two of his 13 opponents to date and is already on the cusp of a world title shot.

He was hoping to secure a crack at one of the champions this month but had to make do with an IBF eliminator against Osaka’s 18-0 hope Masayoshi Nakatani at the top of Top Rank’s card at the MGM National Harbor in Oxon Hill, Maryland on July 19.

Victory should set up a winter showdown with the sanctioning body’s current champion, Richard Commey, before he steps up to light-welterweight in time for the turn of the year.

It is clear that Lopez is a man in a hurry; outside the ring he married his partner Cynthia three days after he stopped Edis Tatli in five impressive rounds on the undercard of Terence Crawford v Amir Khan in April. The newlyweds only met last year.

“We’ve been together just over a year now,” he adds, gazing across the room to where she stands. “It’s been good. I know it’s fast and I never thought that I’d get married this young but I know what I want. That’s the difference with me.

“I’ve messed around plenty of times. Two years ago, coming up, always on TV, I was having fun – come on, who wouldn’t? It was so easy for me. But now, I know what I want. I know that all this that’s happening, I need it. I need a woman like her to keep me always balanced and level-headed, to keep my away from distractions.

“People say things are happening fast for me. The rise has been rapid but I truly believe it’s God’s timings. He knows I’m ready and he wouldn’t put me in any type of situation that he didn’t think I was ready for. I don’t feel the pressure, I think I must be numb to it – I really am.

“I know my family members, my fiancee, they feel it but that’s what keeps me going. When everyone is so worried I can just be like ‘calm down, I got it’. That’s what I like – they’re worried and all worked up so I have to be the calm one in the whole room.”

And that happens often enough. Lopez, born in Brooklyn but raised in Florida, now lives with his family in a quiet gated complex in Las Vegas. They are all heavily involved in the boy’s career.

“My family rely on me now,” he nods. “They work and they help me. My father trains me and my mother is my nutritionist. It’s a team. I know that once everything starts to settle down a bit they will start making their own money and they won’t have to depend on their own son. They’ll make their own moves, they can depend on themselves.

“That’s what I’m looking forward to, that’s the whole goal. That way I can focus on myself and my own family that I will have a couple of years from now. I want kids, my wife never wanted kids, she even told me that on our first date but she might be changing her mind.

“Me and my girl – we are both the same. We love adrenaline. I like sky diving, I want to try parasailing and all that. I want us to do it together. I’m just trying to live my life in peace even if that means fighting. That’s what I’m great at and it’s what I have to do.

“I’ve never had a job in my life. My job was always to do this, my parents always dedicated themselves to make sure I could go to all the tournaments and stuff when I was amateur. It’s time to pay that back.”

Lopez turns 22 this month so time is something he has plenty of. He has dubbed his quick assault on the upper echelons of the division as ‘The Takeover’ but he believes his outspoken desire to dominate at a number of weights has worked against him.

“We’re pushing it more because I want to make these fights happen, win the belts, make my mark and move on. There is only a short window to do it before I move up. I want to collect what I can before I go.

“It’s strange – on one hand people say ‘well who have you fought?’ but then on the other hand people want to see me fight Lomachenko who they say is the best in the world. It doesn’t add up, it’s a contradiction. People say ‘who have I fought?’ But the real question is ‘well who actually wants to fight me?’

“I’m letting all the fighters know this but it’s working against me, they’re taking advantage of it, they’re delaying it because they know I won’t be a lightweight for much longer. It sucks because people on the outside don’t see that.

“But hey, it is what it is and I know what I’m going to do. I know that I have a world title within touching distance and when I win that, that’s what is going to set the tone.”

Given his age, the Lopez story, which started with that limousine when he was only six years old, could still have well over a decade to run if all goes well for the 5ft 8in lightweight. But in an ideal world, where will it end?

“I believe I can go up to 154lbs, maybe 160,” he says. “I’m tall enough and I’m smart enough. I’m a big guy. I’m not at my full potential and I’m not even at my full growth yet, I’m still growing. I still have a couple more years before I’m fully developed.

“I want to create a legacy for my father, to put his name out there, my grandfather too. So when they’re in their graves, when their time is up, they will have made a name for themselves.

“That’s what drives me – to take care of my family and to make sure, when all is said and done, that when I have my family, they’re good.