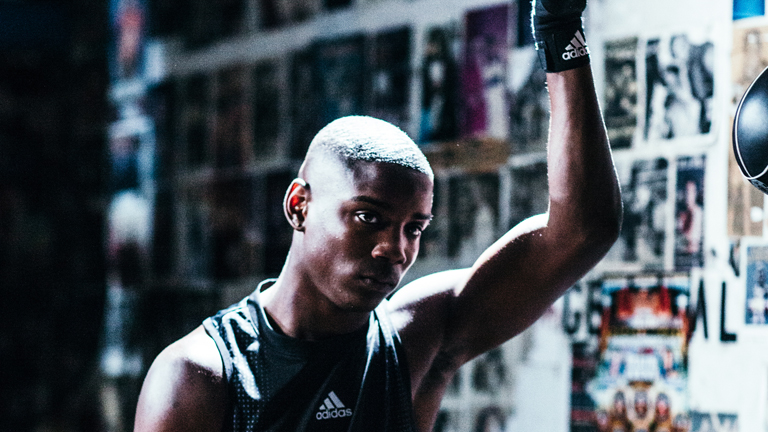 Tell us a bit about your connection to Bernard Hopkins. How often do you two talk? What’s the most important piece of advice he’s given you?

We talk here and there. He’ll call me or I’ll call him once in a blue. But Bernard, I look up to him you know, he’s my mentor. He’s one of the best in the game, who do you know that got into over 70 fights in boxing and can still speak properly he don’t slur or nothing. He can talk for days.

He’s given me some great advice, the one thing I remember is he told me don’t let anybody get you, be smart. And I mean don’t let people take your money or make you sign something.

Do you think your nickname Lil’ B-Hop puts pressure on you? Could anything ever make you change it?

People say it could put pressure on me, but to me there is no pressure. I’m just carrying the name of the B-Hop legacy and I’m going to live up to it.

Could you ever change your name?

[Laughs] I’ve thought about it because B-Hop is somebody else. Everyone knows me as Lil’ B-Hop’ not as Chris Colbert. So I think I’m gunna stick to Lil B-Hop.

Tell us about how you found yourself in the boxing gym for the first time? Did you know from that moment you wanted to be a fighter in the ring?

It was like six years ago. I was like 13 or 14. I used to street fight a lot outside and then one of my friends told me they wanted to go to a gym. I didn’t expect there to be no coaches, just a ring with gloves around that you could pick up and fight. So I went there because me and the kid had beef, problems. I was going there to fight him, to box.

I get there and there are lots of coaches and you’ve got to learn. I see my team mate Ross Carrington Junior, and he said, “I beat you up, real good up” and I had a short temper so anything you say to me I would snap fast like, “What?” After that I was in the gym every day, I had to train to be able to get in the ring with him after he said that.

My second day I sparred with a kid call Mikita, he’s a guy with a lot of experience, a national champion and he beat me up. But I got my lucky punch in, a street fight punch, which changed it all around. Ever since then boxing has been my life. I eat, sleep and shit boxing.

Do you think boxing has changed your temper?

Oh my God, yes. Boxing has changed my life. You could tell me anything, as long as you don’t touch me. Back in the day I was quick to snap on somebody. I would be ready to fight for everything. Because I was short everybody would try me. I had “angry, short, black man syndrome”. [Laughs] I was ready to fight all the time. Now you can say anything as long as you don’t touch me I have no problem. I haven’t had a street fight since my third day in a boxing gym.

If you weren’t a fighter now, what would you be doing?

I’d be in the streets or in jail somewhere. The route I was going on was crazy. I was always in places I wasn’t supposed to be. Now I’m always training, either at home, in the gym, or running. Even when I am home in New York, I am never in the streets.

If we look at boxers such as Amir Khan, he’s fast. Canelo, he’s got power. What qualities do you possess that separate you from your peers and competition? Speed? Agility? Power?

Speed and I’m smart. I learnt from big B-Hop. But whatever people teach me I take that into consideration and I try to really work on it.

You’re wearing the new adidas SpeedEx 16.1, what do you think?

I’m a naturally fast person and always have been. My hands, my head movement and my feet are fast. So I need the best and quickest footwear to keep up with me when I train and fight. The adidas Speedex 16.1 is the perfect shoe for my fighting style, it’s light and packed with technology. That gives me added confidence in the ring. It’s an honour for me to be associated with Adidas.

The speed was always there. I’m just a fast person in general. Picking up sports fast, picking up schoolwork fast. My 40 was a 4.5s in high school.

What sports did you play before you went in to boxing?

I played football since I was six until my boxing pro debut in May 2015. I wouldn’t train for football, just play the games because I had the skills. And then I quit, I was wide receiver in high school and was going to play semi-professional, but I turned pro in boxing and you can’t do both. Injury would mess up my career.

What are some of the exercises boxers can do to speed up?

Work on the speed bag, the double end bag to work on your reflexes and your hand speed which needs a lot of hand-eye coordination. And then shadow boxing with weights. Like handheld dumbbells.

Tell us about being filmed by Netflix?

Yeah I love it, I’m still giving those films, they wanted to come here today… but I didn’t answer the call [laughs]. You can’t do two shoots at one time. It’s an ongoing documentary but it should be coming out in September.

My goal for the year is to be prospect of the year with a 10 and 0 record.

Tell us about your current routine.

At the moment I am training with Juan Carlos Payano he’s the WBA and WBO lightweight World Champion and an Olympic gold medallist. I’m sparring with him, he’s getting ready to fight Rau’shee Warren, who is super-fast and I mimic him a lot. Whatever he does I do.

It’s an honour to be training with him. He motivates me because of his hunger. When you’re not from here, from a Spanish country, it’s harder for you. You’ve really got to grind and work for what you want. They ain’t never give him nothing. He come in as an underdog.

To become World Champion and give back to my community. And just stay humble and focus. Get a company to invest. Stay smart. Make money.