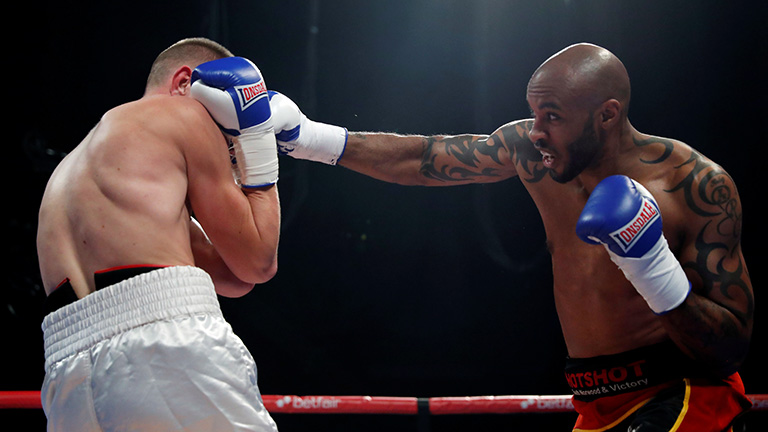 Who’s your opponent for Saturday at York Hall?

Callum Ide. It was meant to be Eric Mokonzo. He boxed on that David Haye show and then he pulled out by the Monday. So I’ve got a guy who was meant to be on the show. He was meant to be boxing at super-middleweight but he was too heavy for that. So they matched him with me instead.

Has the change of opponents been frustrating?

What’s frustrating this time is how close to fight this was. It was only [Wednesday] it was confirmed. I thought I wasn’t going to box.

It happens but this time it was frustrating because it was so close to the actual fight.

Have any of your pro fights been difficult, has anyone taken a round off you?

I think on my debut I lost a round but other than that I haven’t lost a round. With ones that I found difficult that was because I didn’t prepare properly.

I’ve been around the fight game since I was about eight years old. I’ve seen the success stories but also the horror stories. It was a reality check. The way I ended up boxing was because I had an injury from kickboxing and I couldn’t kick efficiently any more. It was because I had those injuries I thought let me get some sort of career underneath if it doesn’t work out. I got just complacent, I got comfortable because I was making a lot of money when I was a financial advisor. When I became a teacher I realised I had more time to get back into boxing. All the time I was still competing amateurs and helping other professionals sparring.

Did you spar with Dillian Whyte?

I used to. Not as much now. The last time I sparred was leading up to the AJ fight. He wanted to spar lighter guys so he could work on his speed and reflexes. He spars the quality heavyweights when he went on Klitschko camps and stuff like that. It was the cruiserweights and light-heavies that were better for him.

And you don’t regret becoming a teacher?

It is tough but it’s balanced with the fun, the personalities of the kids, taking them on trips and stuff like that.

How do the kids you teach react to you being a professional fighter?

Now I’m in primary, when I was teaching secondary, the respect level was there but then you had the ones that wanted to size up, they fancied themselves against you and wanted to get themselves a reputation. But in the primary, they see me more as like a hero.