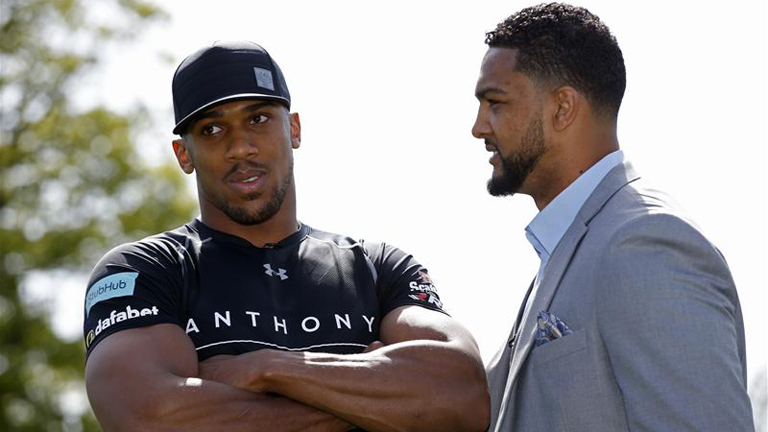 DOMINIC BREAZEALE touched down in London today to face Anthony Joshua, the man Breazeale will challenge for the IBF heavyweight title on June 25.

“He’s the champ, you’ve got to respect him. He’s a big broad guy, very athletic like myself. I wouldn’t want it any other way. I wouldn’t want to fight some slouch. I want to fight the best of the best. I’m fortunate to get this opportunity and I’m going to take advantage of it,” the American said. “He’s good. In the 2012 Olympics he won the gold medal. Unfortunately I thought the Italian [Roberto Cammarelle] actually beat him in the championships, but it is what it is. For him to go on and win a belt after 16 professional fights, he’s come a long way, he’s progressed a lot, as has myself. I’m 17-0, 15 KOs and here I am in my 18th fight, fighting for a world title. Anthony Joshua is a very, very big strong, statuesque, athletic guy but at the same time it’s almost like he’s looking in the mirror… I’m one of those guys that is a dogfighter. I’m going to come to fight every minute, every second of the round.

“It’s going to be a strategic chess match, it’s him against me, me against him. It’s whoever lands faster and whoever’s the quicker guy on the night.”

Breazeale promises that he won’t fold under pressure at the O2. “I’ve boxed at the Staples Center, I’ve boxed at the MGM Grand. In the States that’s as big as it gets for us. It’s maybe 15, 16,000, I think you have 20,000 here. For me I’m used to playing on the gridiron in football with 50 or 60,000 fans yelling and screaming, hating you and calling you all kinds of names. To be in a big arena like that, that’s not going to take an affect on me, it’s one of those things, another walk in the park,” Dominic insisted. “At the O2 Arena with 20,000 fans that are all against me, it’s going to be huge.”

He played college football, for the University of North Colorado, at quarterback. “Pressure of all pressures, there’s no better place to be,” he said, explaining that the switch “is easy now. ’07 was my last year of playing, we’re nine years in now. When I first started it was dreadful. Just the conditioning alone. Playing football, you do sprints or whatnot on a football field. The conditioning level that a boxer needs, to run miles, I’m up to five miles a day on a daily basis, was night and day. So there were a lot of times I said I can’t do this but here I am nine years later getting ready to fight for an IBF title… I don’t know if there’s any other quarterback that made the transition from the Gridiron as an elite athlete and became a title contender.”

He started out boxing to stay in shape for football. “Then I found I was pretty good at it. Every time I hit somebody with the right hand, they went to sleep. I was winning USA national title and became an Olympian in over a year and a half, a very fast track and nine years later here I am,” Breazeale recounts.

The American maintains he’ll be tougher fight than Charles Martin. “It’s a competitive edge. Anthony knows he’s in a fight. He’s not in situation where he’s fighting a guy like Charles Martin who’s coming over here just to kind of lay down. I think Anthony Joshua had that fight won as soon as he did the press conference, like this one and he stood in front of a guy like Charles Martin. He stands in front of a guy, eye to eye, size, shoulders wide, who’s not backing down from him, he knows he’s in a fight. Sometimes words have to be exchanged. We’re both gentlemen, we’re both elite athletes. I think we’re going to handle ourselves outside of the ring as well as inside of the ring,” Dominic said.

It may be galling for Breazeale that US network Showtime has signed a multi-fight deal with Britain’s Joshua, but he maintained that snub is additional motivation. “You’ve got to respect that he’s got the belt and I don’t. But as soon as I knock him out and take that belt, Showtime’s going to be knocking on my door and asking me to take a deal,” he said.

Nor is Breazeale troubled about boxing in the UK. Brandishing his fists, he concluded, “I got one referee and I got one judge. And I plan on using them June 25.”