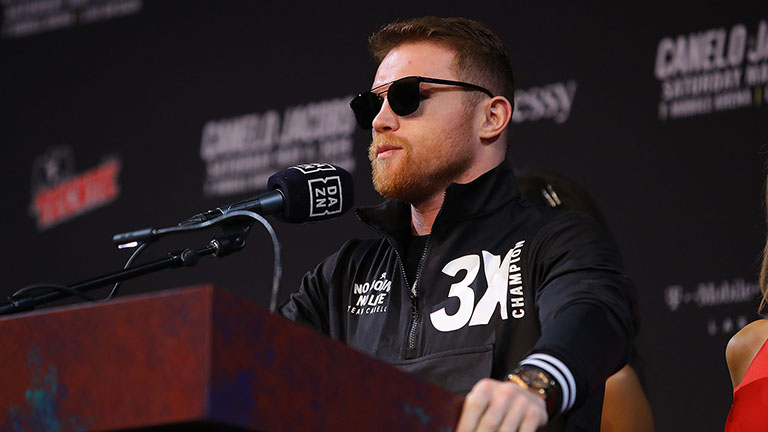 The search for Canelo Alvarez’ next opponent continues, despite offers being made to super-middleweight world champions Callum Smith and Billy Joe Saunders.

Speaking to Sky Sports, Eddie Hearn – who promotes Smith and Saunders – confirmed that both fighters have turned down offers.

He said: “There is a market rate that has been established, unfortunately for [Canelo’s promoters] Golden Boy. Callum and Billy Joe are not even asking for that market rate.

“I don’t know which one Canelo prefers. But I do know both Callum and Billy Joe want the fight. The one who gets the fight? Probably the one who takes it for the least money.”

Hearn finds himself in a tricky position, given that he’s part of the reason the ‘market rate’ is so inflated after DAZN flooded the market with money, spending millions on B-level fights. Both Smith and Saunders deserve a big fight and either would be a credible foe for Canelo – we don’t know the figures, and they should be fairly rewarded, but it would be a shame if both men lose out on the fight.

Oscar De La Hoya – Canelo’s promoter – spoke to ESPN and unfairly brandished Smith an “idiot” for not accepting the offer.

“Callum Smith turned down the fight and he would have made three to four times the money he has ever made and he turned it down,” he said.

“I wish him all the best and hopefully he can make the same money somewhere else. But Callum Smith, the most dangerous fighter out there at super-middleweight, is out there and he’s bragging how he wants to fight the best and he turns it down? What’s wrong with these fighters? What’s happening with the legacies? It’s all business now.”

It’s been all business for a while, and these are worrying signs for DAZN. All three fighters box on the network in the US, yet an agreement can’t be made. Something’s gotta give. Also, De La Hoya’s argument that a fighter should accept a potentially unfair deal because of legacies and fighting the best is an old and tired one; they’re prizefighters and should always fight for the biggest prize possible.

On a brighter note, Hearn indicated that should neither Smith nor Saunders end up fighting Canelo, then they’ll unify against each other instead, which would be lovely.

Eddie also found time to weigh in on the upcoming Deontay Wilder-Tyson Fury rematch, telling talkSPORT that he’s now picking Wilder because of some rumours he’s apparently heard from Fury’s camp about how his training is going. He wouldn’t be drawn on what those rumours were, and maybe it’s just the cynic in me but I usually assume Hearn has an ulterior motive when he comments on fights he’s not promoting. In this case, with Fury being the betting favourite, Hearn’s comments only make the fight more interesting.

It’s time to mention Conor McGregor again, because Manny Pacquiao has signed with the company which manages the UFC star, Paradigm Sports Management. Back in January, ahead of his return to the octagon, McGregor spoke about Pacquiao and mentioned how “we almost signed him.” At the time it wasn’t clear what he meant, but perhaps he was referring to this management deal.

Or, this deal is just another step towards the pair meeting in a crossover boxing match. Who knows? Either way, Paradigm have worked wonders for McGregor, so it seems Manny’s in good hands.

The New York State Athletic Commission finally saw sense and altered their punishment for Ivan Redkach for biting Danny Garcia during their January 25 fight. They’re no longer demanding his $300,000 purse and reduced his suspension to six months, though he still has to pay the $10,000 fine.

Thomas Hauser – who has covered the debacle in great detail over at BoxingScene – justly called the Commission out on their rash decision, and the dangerous precedent it sets. They handed down their punishment with minimal evidence and no due process.

“I think that’s a way to manipulate and politics is playing a big part in that,” Russell said.

“I think that’s a way of hiding fighters and allow[ing] fighters to pick and choose who they wanna fight. You know, I think the sport of boxing is getting weak.”

Fair play to him – as a legitimate WBC world champion, his words carry weight.

BT Sport continued their Wilder-Fury 2 promotion by confirming that John Fury – Tyson’s father – is in fact one of the scariest men on the planet. He was part of a roundtable discussion about the rematch alongside David Haye, Paulie Malignaggi and Steve Bunce which, for the most part, he dominated.

There were times he looked like he was ready to punch everyone at the table – particularly Haye, who he repeatedly disagreed with – though it all came from a deep loyalty to his son. Because of this, the discussion doesn’t serve particularly well as an analysis of the fight, though that doesn’t mean it isn’t an entertaining watch.

BT also released a ‘Tyson Fury Resurrection’ featurette looking at his tumultuous 12th round against Wilder and the parallels it drew with his life outside the ring. With the likes of Mike Tyson and George Foreman involved, it’s an interesting video, and it also produced extended interviews with the protagonists, including referee Jack Reiss, who described his decision to allow Fury to continue as the best of his career.

ITV aired the first instalment of a three-part documentary about Fury and his mental health struggles outside of the ring. It was riddled with errors (calling Wladimir Klitschko unbeaten before he lost to Fury, the inference that Tyson failed a drug test due to cocaine abuse and the notion that Tom Schwarz was a top contender) but even so, it’s a sobering watch, mostly so when Fury recounts the day he left home with the intention of taking his own life. It’s staggering to see where Fury is now in comparison to a few years ago, but his brother Shane provided a valid reminder of Tyson’s ongoing journey: “When he says depression doesn’t leave you he means it. He can be happy one minute and sad the next. That’s the real Tyson.”