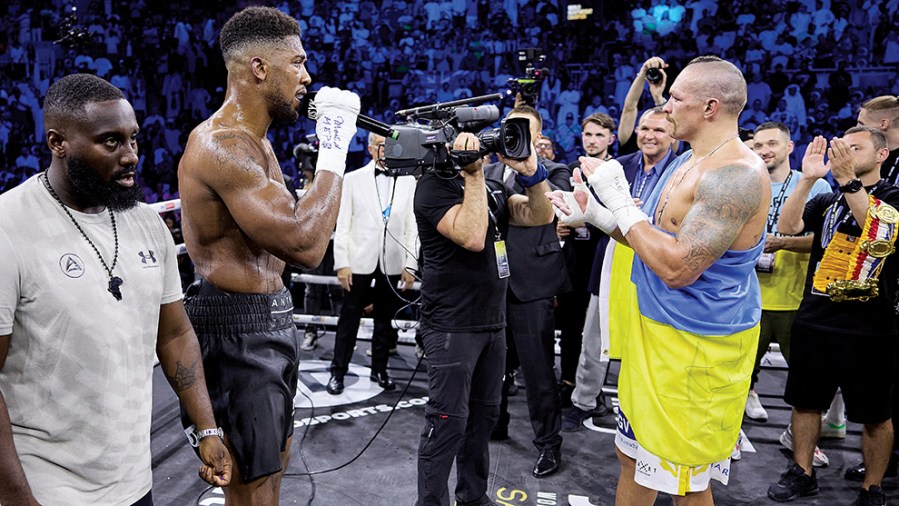 Joshua’s outburst leaves a lot to be desired – so too the oddly managed undercard which left viewers with plenty of opportunities to put the kettle on, writes George Gigney

WHAT Oleksandr Usyk achieved at the weekend cannot be underplayed. To turn in a performance like that amidst a backdrop of war and horror in his home country is astonishing. Sadly, we weren’t given much chance to reflect on his heroics when Anthony Joshua lost his cool after the result was announced.

This column focuses on the coverage of what happens in boxing so there won’t be any pseudo-psychology here, but it’s safe to say that is a moment in time Joshua won’t enjoy watching back.

Adam Smith and Matt Macklin on commentary tried their best to provide some sort of explanation as to what was going on as Joshua raised two of Usyk’s belts above his head before throwing them down at ringside, and then storming off until he came back to the ring to give his largely incoherent speech. But Smith and Macklin, like the rest of us, had no idea what was happening.

It was Frazer Clarke, who was working as a pundit back in the Sky Sports studio, who spoke the most sense on what transpired when he made it clear that someone – anyone – from Joshua’s team should have taken the microphone from him and stopped him doing any more damage.

It would be interesting to hear what those in the arena made of it all as there were several moments that were caught on camera that did not have a microphone to project what was being said. We at home saw how Joshua snapped at Usyk mid-speech when he thought the champion was trying to interrupt before quickly realising Usyk was just trying to take the Ukrainian flag back from Joshua.

“AJ” rightly apologised but the gesture showed a real clarity of mind from Usyk, who could see that he did not want his country’s flag paraded around on the shoulders of Joshua while he verbalised his stream-of-consciousness.

In terms of calling the action of the fight there were times when it seemed Smith and Macklin were focusing a little too much on the success of Joshua when they happened. However this notion was dispelled once they started sharing their unofficial scorecards and it became clear neither had Joshua ahead at any point in the fight.

Macklin was also right to call out the scorecard of Glenn Feldman, who gave the fight to Joshua with a score of 115-113. As Macklin said, there is no way you could legitimately score that fight for Joshua.

One thing that the Sky broadcast team did get wrong a few times during the broadcast was their referral to Ukraine as ‘the Ukraine’. That term is one the Russians used during the Soviet era and has long been officially deprecated by the Ukrainian government. Unfortunately it’s still used but given what is happening in Ukraine right now, the Sky team should have made sure they’d stamped it out before going on air.

It might seem like a trivial thing to some but ask any Ukrainian and they will tell you the significance of that phrasing.

What Sky did do well was fill an atrociously-timed card. The broadcaster had no control over the timing and structure of the actual fights, so can’t be to blame for the ridiculously long gaps in between some of the bouts.

There were over 40 minutes between Badou Jack’s fight and Callum Smith’s, which was the next one on the card. Then, after Smith won in four rounds and it seemed we were back on schedule, they put on a four-round float fight before the chief support. Ben Whittaker, an exciting prospect, fought on the card but we weren’t shown any part of his contest.

Add to that the fact that the event itself in Jeddah just felt flat and it becomes even more of a shame to think that big fights will continue to take place in that region because of the money on offer.

To Sky’s credit, they filled the gaps with decent content. Clarke was joined by Lawrence Okolie and Carl Froch on punditry and they also had trainer Dave Coldwell manning the touchscreen board to talk through potential tactics and outcomes, which was genuinely interesting.

Overall though, it felt like we should have gotten more out of such a big fight in terms of spectacle and coverage. That is largely down to how it was organised and executed in Saudi Arabia.

DAZN however have a lot to answer for. YouTuber KSI is headlining a PPV card on their platform and will apparently fight two people on the same night, one of whom is a rapper. The other opponent was initially Ivan Nikolov of Bulgaria.

Once that was announced, social media lit up in response to highlight various tattoos Nikolov has that seem to be overtly racist, some even having links to neo-Nazism. Once this uproar occurred, Nikolov was pulled as the opponent and KSI claims the matchmaker responsible was ‘fired’.

DAZN were fully advertising this contest. It’s claimed they weren’t aware of Nikolov’s apparent overt racism. So why was it so easy for people on social media to pick up on it in a matter of days? He has these symbols and phrases tattooed onto his skin, it isn’t exactly subtle.

Where was the due diligence from DAZN? It’s one thing for the matchmaker to be punished, but DAZN ultimately signed off on this too and began promoting it. Nikolov caused a stir back in 2018 when he fought on a Kell Brook card in Sheffield – when that happened, his tattoos were flagged by plenty of people.

It’s baffling that DAZN let this happen. YouTuber boxing is its own thing, so who KSI fights isn’t particularly important – unless that person is an alleged white supremacist. Surely boxing can draw the line at giving a large platform to racists?