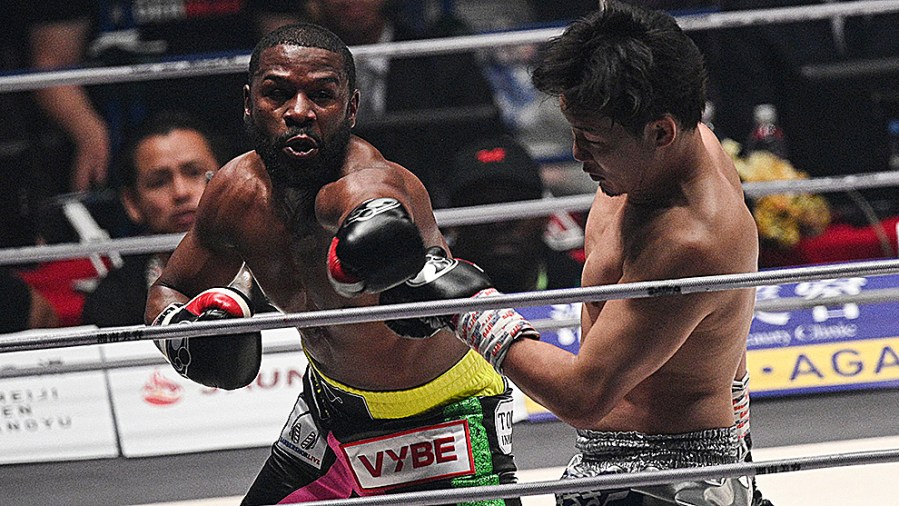 LIKE it or not, the appeal of Floyd Mayweather endures. There were several fight cards broadcast over the weekend, but it was Mayweather’s three-round exhibition in Japan that made the most headlines worldwide. Video clips of the fight, including the finish, gained millions of views online within hours.

It helped that Manny Pacquiao was ringside for the fight. Even in the days prior, soundbites and quotes from Mayweather’s interviews were widely reported on. He will have another exhibition fight before the year is done against a British YouTuber. Floyd also claimed negotiations for another meeting with UFC megastar Conor McGregor are in advanced stages.

If you follow any sort of boxing news, you will have seen stories about Mayweather several times over the past week or so. And all this was for a three-round walkabout that he appeared to have trained very little for. Oh, and it netted him a reported $20 million.

Now, the actual boxing cards that were on this weekend weren’t exactly blockbusters but it’s still telling just how much attention Mayweather got over the past week. At one point he said that he’s still the biggest name in the sport despite being technically retired – and he’s probably right.

Boxing currently has its superstars but none that transcended into the public consciousness like Mayweather and indeed Pacquiao. It could be some time before we see their like again.

It was announced by the BBC that the terrestrial broadcaster will continue airing live professional boxing for the first time in 17 years after its coverage of a Welsh card earlier in the year – what’s more, it will feature female professional fighters, which will be a complete first for the BBC.

Unified Promotions are staging a four-fight all-female card in Sheffield next month and the show will be broadcast live on BBC iPlayer. It’s a shame the card won’t feature on one of the core BBC channels, but this seems like an important step in the right direction. It’s being reported that, should this go well, boxing could feature more regularly on BBC3.

The BBC for quite some time has left boxing on the sidelines when it comes to coverage. That’s not just in terms of broadcasting, but even news reporting of the sport. So this latest development could be extremely exciting. It could get vastly more people watching boxing, particularly those who perhaps weren’t interested in it beforehand.

It’s also another shot in the arm for female fighters. This card will take place one week before the huge all-female card on Sky Sports that features Claressa Shields against Savannah Marshall and Mikaela Mayer versus Alycia Baumgardner. It’s cards like these that will reach girls and young women and encourage them to take up the sport – that’s how it grows.

It’s unlikely that the BBC will begin heavily investing in boxing from here on in, particularly when you consider the eye-watering sums other broadcasters pay for the sport, but this is undoubtedly a positive progression.

In one of the stranger stories to emerge last week, Eddie Hearn and Matchroom Boxing are suing Jake Paul for $100 million. Yes, 100 million actual US dollars. TMZ first reported the news.

The dispute stems from comments Paul recently made in an interview with IFL TV. The YouTuber claimed that judge Glen Feldman – who scored the recent Oleksandr Usyk-Anthony Joshua rematch in favour of the latter and had Katie Taylor as a wide winner against Amanda Serrano earlier in the year – had been paid off by Matchroom for those two cards.

It’s just a stupid thing to say, isn’t it? There is zero proof that any sort of corruption exists in boxing, and certainly not at the highest level. Are there issues with judging within the sport? Absolutely, but it’s not because judges are on the take.

Paul wants to be taken seriously as a boxer and, apparently, as a promoter – he’s yet to give us a reason to, and these comments are just further proof that he doesn’t understand the sport. Hearn and Matchroom won’t get $100 million out of him but legal action is the right move – you can’t just throw around serious allegations against a rival organisation without any evidence like that and not expect any consequences.

Speaking of consequences, it was interesting to watch the reaction to Shakur Stevenson missing weight for his fight over the weekend. He relinquished his ‘world’ title on the scales as well as a portion of his purse. In the past we’ve seen fighters – particularly champions – lambasted for missing weight, but Stevenson received no such backlash.

In fact a lot of reactions were centred around excitement at the prospect of the young talent now moving up to lightweight where the likes of Devin Haney and Gervonta Davis operate. Losing his title and sacrificing money is a fitting punishment for missing weight and it was encouraging to hear him immediately admit that he has outgrown super-featherweight and will immediately move to 135lbs.

Ideally fighters should just automatically choose to fight at their natural weight rather than boiling themselves down and rehydrating for fight night. Perhaps we’re starting to see a shift in public perception where, rather than shout fighters down for missing weight, fans are just glad to see them facing up to the realities of their bodies.

This isn’t to celebrate Stevenson, though. He still missed weight and if he previously knew he can’t safely make 130lbs he shouldn’t have taken this fight and instead moved up in weight beforehand.

Usyk sat down for a lengthy interview on his personal YouTube channel and it produced some fascinating insights to how he works. He revealed that during press conferences he pays more attention to people’s body language rather than what they say. In his final presser with Joshua, he was reciting a sequence of 45 different numbers between one and 100, a task assigned to him by a member of his training team.

Like his close friend Vasily Lomachenko, the Ukrainian maestro trains his mind just as much as his body.