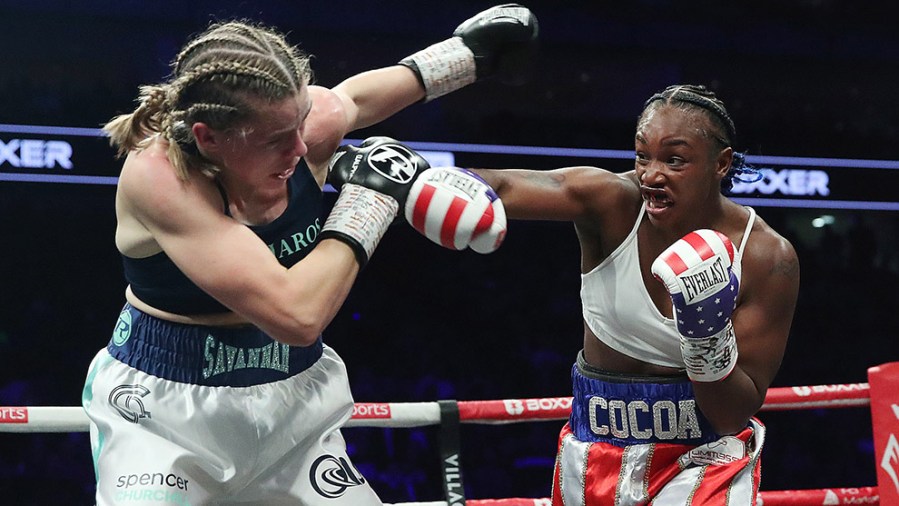 AFTER one of the most despicable weeks in the sport’s recent history, boxing was able to experience something of a high this past weekend with several high-profile shows proving successful, most notably the Sky Sports card from London.

The headline bout – Claressa Shields facing old amateur rival Savannah Marshall – was an instant classic and served as a needed reminder of why we follow this sport despite its drastic flaws. It was electric from start to finish and, in the end, the right woman got the nod on the scorecards.

The chief support, which saw Alycia Baumgardner defeat Mikaela Mayer, was also terrific though not quite as thrilling as the main event. It was also a much closer fight and the decision, a split one, reflected that. It seemed like it could go either way and it was by no means a robbery as some have claimed.

The Sky commentary seemed slightly biased toward Mayer, failing to pick up on many of the excellent counter shots Baumgardner was landing throughout the fight. Their punditry team also insisted there “has” to be a rematch, suggesting the decision was unfair, which seems particularly harsh on the victor.

This card, which also featured rising stars Caroline Dubois and Lauren Price, highlighted just why the regulations of women’s boxing need to change. After the two headline fights it became even more clear that every boxer – male and female – should fight three-minute rounds in the professional ranks.

This was rightfully picked up by the Sky commentary team. Two-minute rounds simply aren’t long enough, particularly when championship fights are only limited to 10 sessions. We’ve been banging on this drum for years now – please can we either see change or concrete evidence as to why two-minute sessions must remain.

DAZN aired a solid card from Australia earlier in the day on Saturday, though any good will built from that was swiftly destroyed with the atrocious ‘influencer’ card they staged in the evening. It genuinely isn’t worth talking about.

After his son’s fight with Conor Benn imploded, Chris Eubank Snr – who for weeks has been publicly speaking out against the fight – spoke to talkSPORT about the situation. The interview is, at times, hard to listen to. Any notion that Eubank Snr’s protests against the fight being a marketing tactic – an idea floated in this column a few weeks ago – should be denounced and Snr deserves an unreserved apology for them.

This is a man who has already lost a son desperately trying to prevent a situation in which he may lose another. He said: “To have him [Chris Eubank Jnr] boil down to 157lbs is literally attempted murder… They were trying to pay me to be in his corner. They wanted me to be an accomplice to my son’s murder.”

He was asked if he felt relieved the fight was cancelled, to which he responded that the word “relief” is so unworthy of describing what he feels as to be insulting. If you listen to the interview you can hear the anger and pain in Eubank’s voice.

He also told talkSPORT that he will continue to pursue some sort of accountability from those in charge of staging the aborted event.

It’s an awful situation and one that the Eubank family – both Snr and Jnr – have handled just about as well as you could have hoped. Junior has remained graceful despite everything that’s gone on while Senior is directing his outrage in the right place; at the rusty and conceited systems within boxing.

After his first-round knockout of Robert Heleninus in New York, Deontay Wilder cut a very different figure to one we’ve seen in the past. During the post-fight press conference he broke down in tears when reflecting on the damage that can be done to a person inside a boxing ring, citing the tragic example of Prichard Colon in 2015.

Moments prior, Wilder had just left Helenius horizontal on the canvas, his glazed eyes staring up at nothing. Wilder spoke of how he never wanted to cause Helenius harm; he was just doing his job. Thankfully Helenius was able to rise under his own steam and has been given the all clear.

This is a far cry from the Wilder who, just a few years ago, claimed he wanted to kill somebody in the ring. That previous boast was clearly a misguided marketing tactic – what we saw this weekend was much closer to the real Deontay Wilder. His honesty and vulnerability in that moment should not go unnoticed.

It’s also hard to not reflect on Wilder’s comments within the context of Benn’s recent failed drug test. Here is probably the most devastating puncher on the planet in tears at the thought of how he could irreparably change the life of an opponent simply by doing his job. There is absolutely no room for performance enhancing drugs in this sport.

Promoter Eddie Hearn spoke to Boxing Social and the official Matchroom YouTube channel about the ongoing Benn issue, repeatedly insisting that “there is a huge amount of information that will come out that does not make sense here.” Apparently Benn and his team will be making a statement in the coming weeks.

That’s all well and good, but we’ve been here before. Countless times. An “adverse finding” pops up for a fighter, an investigation of some sorts ensues and then we hear next to nothing about it. There’s no transparency. How is the sport to change if we’re just going around the same circles on repeat?