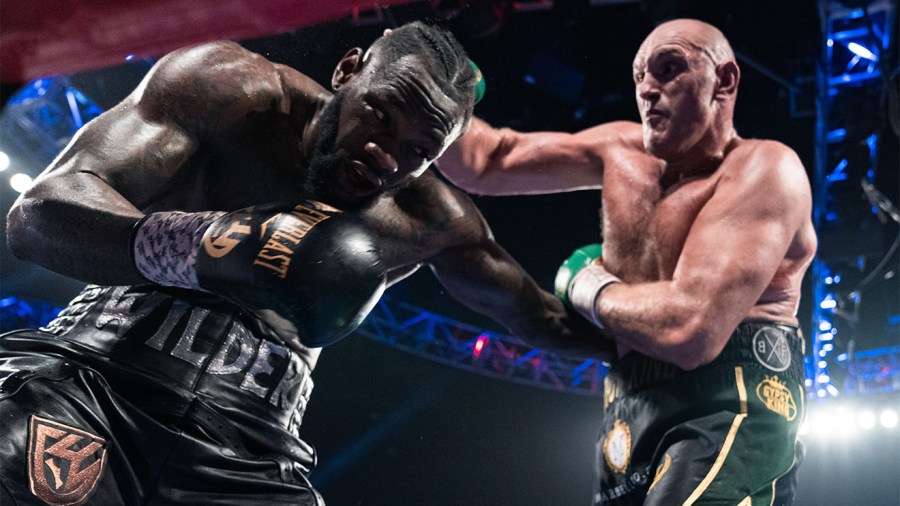 IT’S old news by now, but it’s still worth mentioning Deontay Wilder’s baffling excuse for his punishing loss to Tyson Fury; the costume he wore to the ring. The former champ claimed to Kevin Iole of Yahoo Sports that the 40-pound piece of kit sapped all his energy as he walked to the ring wearing it, leaving him a lamb to the slaughter.

In the ring immediately after the right, Wilder was mainly magnanimous in defeat, but just a few days later he was spouting this drivel. It also throws into contrast Anthony Joshua’s admirable behaviour after his loss to Andy Ruiz last year – no excuses, besides mention of health concerns that he refused to detail.

Unsurprisingly, he was berated everywhere online and things only got worse when clips from old interviews resurfaced showing Wilder claiming he regularly trains wearing a 45-pound weighted vest and also berating other fighters for making excuses after losing. The internet remains undefeated.

Thankfully, Wilder showed more sense when he followed up this news with confirmation that Mark Breland will remain a part of his team after throwing in the towel against Fury. There had been rumblings that Wilder was going to fire Breland for his act of compassion, but Deontay has wisely kept the veteran trainer on board. It would’ve been a worrying sign if he had fired Breland, particularly as it would leave Jay Deas in charge after he claimed he wouldn’t have thrown the towel in, despite the shellacking Wilder was receiving.

Barney Ronay – an excellent writer – cast his eye on Fury’s new cult of personality for The Guardian, exploring the question of just how Fury, according to Ronay, became “the most popular English sports person” right now, given that just a few years ago he was Public Enemy Number One. There’s plenty I disagree with in the piece – particularly the notion that Fury could be a “Muhammad Ali figure for angry white bald men” – but it’s an interesting exploration into the continuing mystery of Fury and his incredible career.

In the same vain, VICE ran an article about Eddie Hearn, focusing on why – according to the writer – he is more famous than a lot of the boxers he promotes. Strangely, they attribute a lot of this fame to the notorious ‘NoContextHearn’ Twitter parody account which, while funny and very popular, came along well after Hearn had established himself as somewhat of a celebrity. More fittingly, the writer picks up on how Hearn has embraced the digital age; “He is both the first YouTube promoter and the first promoter of YouTubers,” they write.

The New York Times ran a lengthy piece titled “How New York City Lost Boxing,” which ended up being a slightly misleading headline. The article is centred around fledgling heavyweight Pryce Taylor, who recently missed out on a place at the upcoming Olympic Games, and his struggle to successfully turn over.

The writer rightfully picks up on astronomical rent prices in the city as a key reason for so many boxing clubs disappearing, but also lays a lot of the blame at new boutique boxing gyms aimed at keep-fitters. OK, yes, these expensive gyms certainly help to push out traditional boxing clubs, but they’re not the main reason. Beside the rents, there’s also the problem that there are far fewer professional cards in New York nowadays after the state athletic commission ramped up the costs of getting them insured.

The article also picks up on the sad reality that a lot of free boxing programs for youths in the city have shut down because of rising costs. So many boxing greats began their journey in the sport by simply walking into their local gym to try it out – there are now fewer places than ever in New York for young people to do so.

In Northern Ireland, Carl Frampton and Paddy Barnes are working to help prisoners aged between 18 and 21 to discipline and rehabilitate themselves through boxing in a new initiative at Hydebank Wood College. The programme is the first of its kind in the UK and, should it become successful, would further prove the benefit boxing can have on society. Kudos as well to Frampton and Barnes for giving up their time for such a worthy cause.

After announcing their new training partnership, Josh Taylor and Ben Davison sat down with Frampton and Chris Lloyd for the TKO with Carl Frampton podcast. Taylor explains that Davison’s work with Billy Joe Saunders was part of the reason he decided to team up with him after splitting with Shane McGuigan.

Davison, inevitably, was asked about Fury’s win over Wilder and told of how he gave Tyson time to decompress after the win before contacting him, knowing how hectic things can be. He also spoke to those around Tyson first, asking them how he was doing, given how badly he spiralled after his win over Wladimir Klitschko. Those are the signs of a good friend and an emotionally intelligent man – a rare thing in boxing.

Eddy Reynoso – trainer of Canelo Alvarez – told Ellie Sechback that his charge has signed to fight WBO super-middleweight champion Saunders in May. This came as a surprise to many, as WBA champion Callum Smith appeared to have emerged as frontrunner to get the Canelo fight. However, speaking to IFL, Hearn quickly refuted that a deal was officially “done” although had also been told by Reynoso that Saunders would be next.

Several reports have claimed that Wilder-Fury 2 garnered roughly 800,000 pay-per-view buys in America – a figure short of their broadcast hopes. If those reports are accurate, it will be interesting to see what approach is taken for the trilogy fight which, given Fury’s dominance in the rematch, surely won’t sell as well.

However, Bob Arum – speaking to Ringside73 – claims that the official US PPV figures haven’t been finalised, and also stated that the fight shifted 800,000 buys in the UK, a solid figure for a 4am card.