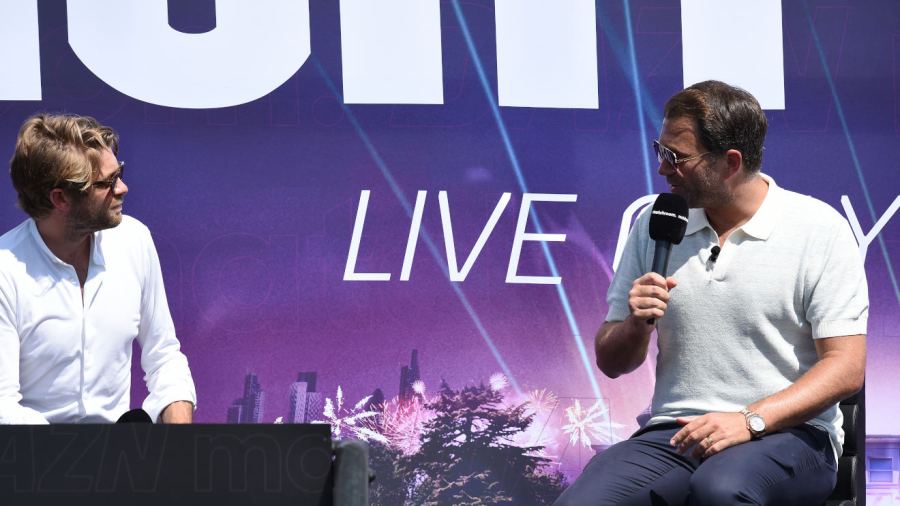 Reports suggest DAZN is closing in on a deal to take over BT Sport, Terence Crawford demands $10m in damages as he files lawsuit against Bob Arum and more in George Gigney's media review

THE relationship between promoter Bob Arum and pound-for-pound stalwart Terence Crawford has been growing increasingly fraught over the past few years, so much so that their partnership ended in November of last year.

Now, however, it has gone a step further as Crawford filed a lawsuit against Arum, accusing him of “revolting racial bias” and demanding $10m in damages, according to the New York Post.

The legal filing claims that Arum purposefully handicapped Crawford’s potential earnings by refusing to market him, alleging that he did so because of an apparent racial bias against black fighters.

Arum told the Post: “Don’t call a man a racist when really this is because of your own failures. His marketability didn’t measure up to this ability and that has absolutely nothing to do with what race he is. The outstanding fact is that Terence’s numbers on PPV have always been dreadful because of his failure to market himself.”

This is all quite ugly. Arum – now 90 – has said some regrettable things in the past, including a comment about how Floyd Mayweather Jnr enjoys “shooting up cars” in his spare time; an untrue statement that seemed steeped in a racist stereotype. However, Arum also has a storied history in boxing and has had successful relationships with some of the sport’s most prominent black fighters; Muhammad Ali, George Foreman, Sugar Ray Leonard, Marvin Hagler and Mayweather, to name a few.

Crawford’s lawsuit states that many people within boxing see Arum as a racist and that his bias against black fighters is clear to see. That doesn’t appear to be the case at all; the documents mention no names of someone stepping forward to accuse Arum of this and there have been numerous people, including Foreman himself, who have publicly defended Arum since news of the lawsuit came to light.

It is suggested this lawsuit is a product of Crawford’s frustration more than anything else. If there was clear evidence that pointed toward Arum misrepresenting black fighters because of their race, then it would be a different issue entirely.

Crawford does have a right to be frustrated, too. He is one of the most talented boxers on the planet – and has been for years – yet still cannot be considered a legitimate star. Arum has frequently spoken about how Top Rank lost money on Crawford PPVs which, while not inherently racist, didn’t exactly help “Bud’s” cause.

That being said, the lawsuit did raise some valid points, namely that Top Rank has no black executives and very few black employees overall. Representation is essential in any company, not just Top Rank, and steps should always be taken to ensure it is present.

For now, the hope is that Crawford can push on with his career and get the big fights he’s been so desperate for – more specifically a superfight with Errol Spence Jnr.

It seems as though DAZN is once again the leading contender to acquire UK broadcaster BT Sport. Reuters reports that the streaming service is closing in on a deal that would see it take over BT Sport at a cost of $800m.

The move would give DAZN broadcast rights to live Premier League and Champions League football games; products the service has long wanted to offer. For BT as a whole, a sale could help cover the costs of recent rollouts for fibre broadband and 5G next generation wireless networks. It has also been reported that the telecoms giant wants to move away from costly sports broadcasting.

It’s unclear at this stage what a sale to DAZN would mean for BT Sport’s boxing offerings, which are currently aligned with promoter Frank Warren. BT also has a broadcast deal with the UFC.

If the sale goes through, DAZN would instantly become Sky Sports’ biggest competitor in the UK and the service’s plans for aggressive expansion would receive a needed shot in the arm.

BoxingScene confirmed with several sources that one of the best fights that can be made in boxing is close to being finalised. Katie Taylor and Amanda Serrano are on course to face each other toward the end of April at Madison Square Garden in New York. It would be the first women’s fight to headline a show in the Garden’s main theatre.

Taylor-Serrano has the potential to change the landscape of women’s boxing and bring it further into the mainstream. Not only are both fighters extremely marketable, they are exceptionally talented and decorated competitors. Let’s just hope they’re finally allowed to fight over three-minute rounds.

As Anthony Joshua seems set to reveal a new training team, he has received some stick for a recent Sky Sports interview in which he discussed listening to motivational speeches.

In reality, the interview was open and honest. Whether or not you agree with Joshua’s decision to split with Rob McCracken – which has not yet been confirmed – he remains refreshingly erudite in defeat.

In the interview, he talks about how he was able to compartmentalise his loss to Andy Ruiz Jnr, but that this most recent defeat to Oleksandr Usyk was hard to swallow because he was at “100 per cent”.

If he can carry that self-awareness into his training camp for the return with Usyk (which is also yet to be finalised), he will be bolstering his chances of exacting revenge.