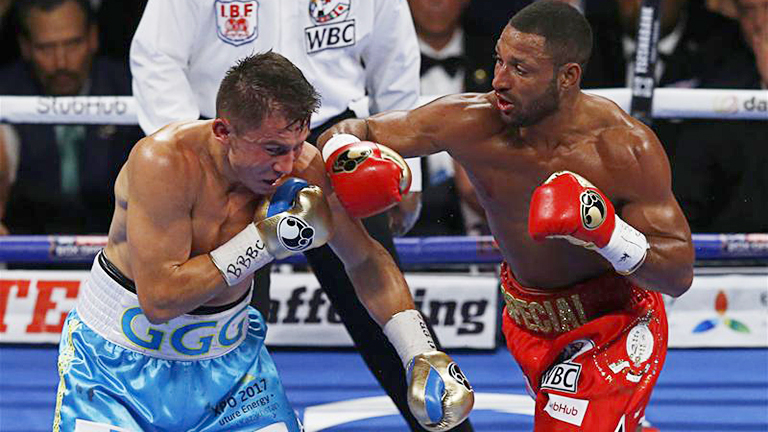 POUND-for-pound kingpin turned promoter, Floyd Mayweather, recently revealed his prediction for the potential mega-bout between the unified champion at 160 pounds, Gennady Golovkin, and the man that holds the middleweight lineage, Saul ‘Canelo’ Alvarez.

“Money’s” money is on the Mexican ginger, all the way.

“ “Canelo” beats “Triple G” easy,” said Mayweather after one of his Las Vegas fight cards. “He’ll stop him. It don’t go the distance.”

Golovkin looked less than stellar in his fifth round TKO victory over Kell Brook. To say that he got hit with a few good shots would be an understatement. The bombs that the Sheffield native landed at the O2 Arena last month, were the cleanest, if not the most powerful ever set off on the Kazakh.

Never mind that Golovkin ultimately trounced Brook. The set of punches that did land on “GGG” in the first few rounds of that fight was all that Mayweather needed to see to render his judgment.

“He’s a guy that’s straight up and down,” Mayweather added. “Good punching power but really no special effects. If [Brook], with decent boxing skills, exposed him, you guys already know what would have happened if that was me.”

But, alas, Mayweather is gleefully retired and lapping up the promotional side of the game. If he wasn’t, he’d surely jump at the chance to fight Gennady Golovkin, right?

And since that fight is not happening, the biggest matchup in the sport is, undoubtedly, the one between Saul “Canelo” Alvarez and Gennady “GGG” Golovkin.

Much to the chagrin of fight fans worldwide, however, Golden Boy Promotions Chief, Oscar De La Hoya, is letting that fight “marinate” until who knows when.

Not surprisingly, Mayweather agrees with the approach being taken by his former rival.