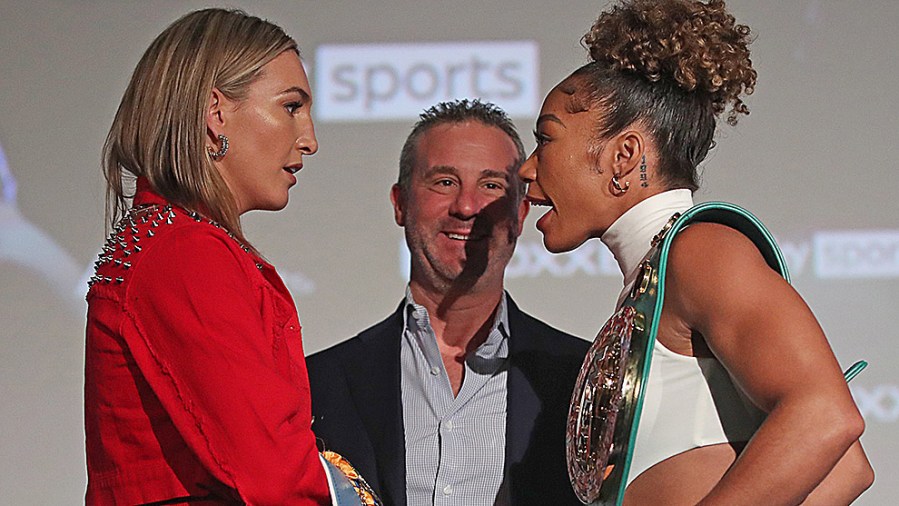 Unlike most, the rivalry between Mikaela Mayer and Alycia Baumgardner seems very real, writes Roy Kelly

PANTOMIME season is just around the corner and very much a British thing.

But top marks to American boxers Mikaela Mayer and Alycia Baumgardner for throwing themselves wholeheartedly into panto mode in London.

The super-featherweight pair have spent months taking swipes at each other, both on social media and in person, and did not relent at their final coming-together at BOXXER’s media conference at the Genesis Cinema in Bethnal Green.

Some bitter contests, you suspect, may just be that little bit superficial, just like the House of Commons where they indulge in political sledging before adjourning to the bar in Westminster for a convivial nightcap. But the Mayer vs Baumgardner squabble looks a very real rivalry, especially after security had to separate them at the end of a trash-talking face-off soon after speaking over the top of each other on stage for over a minute.

IBF, WBO and Ring queen Mayer is the former Olympian, darling of Top Rank, and undefeated with 17 victories, while Baumgardner, holder of the WBC and IBO crowns, is the big puncher who came to Britain and dethroned Terri Harper.

There is no love lost between the boxers who contest what is labelled as the co-main event.

In shades of Chris Eubank Str when he shared a TV studio with Nigel Benn on ITV all those years ago, Mayer sat with her back to Baumgardner.

“I’m expecting the performance of my life,” said Mayer. “I’m going to put it all together, I’m going to embarrass her, I want to make her look stupid.

“Whether she likes me or not or likes the way I box, on paper I’m absolutely her biggest test.

“I’m an Olympian, a multi-time world champion, I’ve defended my belts many times, she’s not fought anyone with my type of resumé.

“I’ve been running this division for years now.”

It is a step up for Baumgardner, but ‘The Bomb’ has no doubts she can reprise that win over Harper from Sheffield 11 months ago.

“It’s going to be embarrassing that someone who has come out of the woodwork to become world champion is going to beat her,” said the 28-year-old, whose record is a more modest 12-1.

“I’ve great sportsmanship, but there is no respect from me, this is the fight game.

“It’ll be a tough pill for her to have to swallow when I beat her.

“The fight with Terri Harper is just a fraction of who I am. I have progressed daily and I believe what I can achieve.”