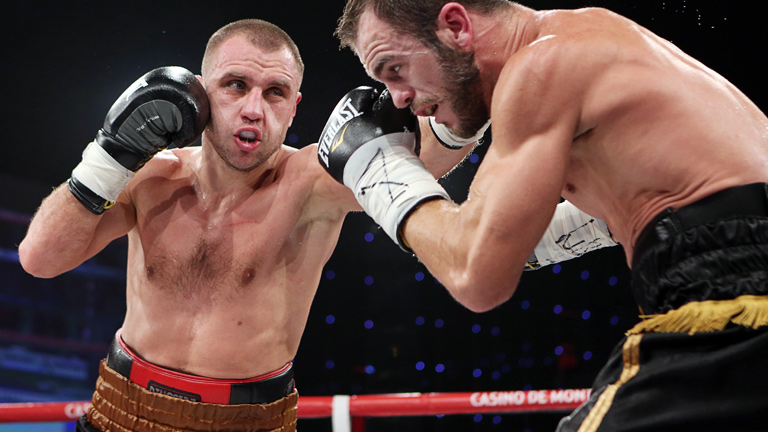 WHEN and why you started boxing:
My younger brother and I were hyperactive kids. We had lots of energy, so we needed to do some physical activities to expend it. Therefore, we chose boxing. I was 12 years old when we entered the gym for the first time. We started to win our fights, and boxing became our life. For instance, my brother, Igor Bursak, won a gold medal at the World Cadet Championships in Kecskemét, Hungary in 2002.

Favourite all-time fighter:
Mike Tyson, Felix Trinidad and the Klitschko brothers – Vitali and Wladimir – are the best fighters of all time.

Best fight you’ve seen:
Diego Corrales-Jose Luis Castillo I [a 10th-round stoppage victory for Corrales in May 2005]. That clash was a total war and extremely dramatic.

Personal career highlight:
As an amateur, I was the second or third best middleweight in Ukraine. I was a member of the Ukrainian national team, but unfortunately I never took part in the European championships, World championships or Olympics Games. However, I did defeat current WBA, IBF and WBO light-heavyweight champion Sergey Kovalev at the Black Sea Cup, as well as European cruiserweight title challenger Dmytro Kucher at the Ukrainian national championships.

One of the best wins on my pro résumé came against Brian Vera [ud 12 – September 2010]. He was at his peak at the time and had beaten some top fighters, such as Andy Lee. In [June] 2008, I easily stopped Giovanni De Carolis [in eight rounds]. He currently holds the [secondary] WBA super-middleweight belt. I also captured the [vacant] European middleweight title in France by stopping local favourite Julien Marie Sainte in the third round [in February 2013]. Also, I’d like to mention tough-as-nails youngster Nick Blackwell from the UK, who I edged out in a very hard fight [ud 12 – September 2013]. Belarus’ Sergey Khomitsky was a good win too [ud 10 – October 2009]. He’s always dangerous.

Toughest opponent:
Vera, because of his experience, aggressive style and power. Hassan N’Dam N’Jikam [l ud 12 – May 2012] is a very fast and slick boxer. Martin Murray [l ud 12 – June 2014] is a very good fighter whom I rate as my strongest opponent. Also, the talented and hungry Blackwell knocked me down for the first – and only – time in my professional career.

Best and worst attributes as a boxer:
My strengths are my physical power and conditioning. I’m always ready to apply pressure on my opponent from the beginning of the fight until the final bell. I box as a pressure-fighter, moving forward towards my opponents, forcing them to step back. I’ve never been stopped as an amateur or a pro. As for weaknesses, I don’t want to speak about this.

Training tip:
Vitali Klitschko gave me some good advice. He said, ‘If you can believe it, you can achieve it.’ If you believe in yourself and work hard, you can overcome any obstacles to reach your goal.

Favourite meal/restaurant:
I enjoy eating pasta and sushi. My favourite restaurant is Velour in Kiev, Ukraine.

Other sportsman you would like to be:
Football, karate and shooting are some other sports that I enjoyed during my childhood, although I’m sure that boxing is my destiny.

Who would play you in a film of your life:
Either Vin Diesel or Brad Pitt.

Have you ever been starstruck:
I’ve never felt anything like that.

Last time you cried:
When I was a child.

Best advice received:
The advice from Vitali Klitschko, which I mentioned earlier.

Worst rumour about yourself:
There are plenty of idiots and keyboard warriors on the internet who spread stupid rumours. I never take any notice of them. As the saying goes, ‘The moon does not heed the barking of dogs.’

Something not many people know about you:
I’m going to become a world champion. I have all the tools that a fighter needs to win a world title. I’ve had a long and tough career, but I’m going to realise my dream.