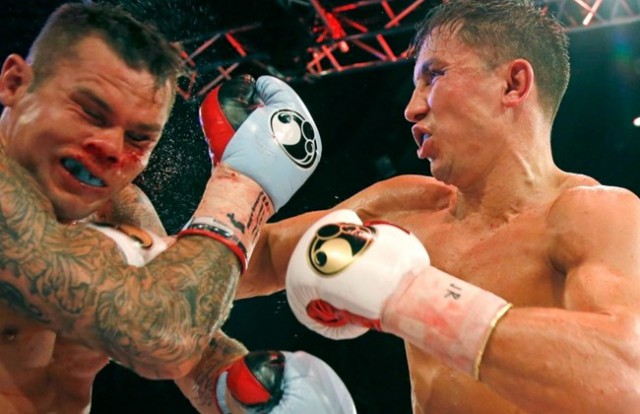 ALTHOUGH Martin Murray and Paul Smith both fell short in their world title attempts, there are a lot of positives to take from the weekend’s action. From Golovkin’s chin to David Price’s desire for more rounds, here is a list of five lessons we learnt from the weekend.

More of a confirmation of what we already knew rather than a brand new lesson, but Gennady Golovkin’s 11th round stoppage win over Martin Murray on Saturday night further proved his granite chin.

Despite his dominance in the fight, which saw him drop Murray three times before the referee stopped it, the Kazakh shipped his fair share of punishment from the game Brit.

In between Golovkin’s vicious assaults, Murray was able to land some flurries of his own, alongside the occasional counter-right hand. While the punches were nowhere near as menacing as Golovkin’s, they still found their mark and they were thrown with intent.

However, on top of all his other fearsome assets, Golovkin can also take a very good punch. While Murray folded under Golovkin’s shots, the champion walked through anything Murray dared to throw back, barely blinking.

This is not the first time we’ve seen ‘Triple G’ withstand adversity in the ring though. In recent fights with the likes of Daniel Geale and the heavy-handed Curtis Stevens, he remained nonchalant as shots bounced off his loveable face.

In fact, he has reportedly never been put down in over 350 amateur fights and his 32 professional contests, or in sparring.

As the Murray fight proved, if there is any chink in Golovkin’s imperious armour it is a slightly leaky defence. That shortcoming, however, is compensated by Golovkin’s durability, something that only adds to the seemingly insurmountable task of beating him.

While Golovkin further proved the resilience of his chin, Murray showed the enormity of his heart. After meeting the canvas twice in the fourth round, Murray’s already unenviable task became nigh-on impossible.

In previous fights, once Golovkin had floored his opponent for the first time, he finished the job soon after and it looked to be going that way as Murray clung on to his chances after that catastrophic fourth round.

However, the St Helen’s man bit down hard on his gumshield and did the unthinkable – he fought back. Still not fully recovered from the body shots that sent him down, Murray was bloodied and beaten until round seven when he seemed to find his legs again.

In a maniacal show of machismo, Murray dropped his hands and goaded Golovkin on. Apparently, he didn’t seem to enjoy consciousness.

Obliging, Golovkin set about dismantling Murray who, despite the onslaught, kept his feet and fired back. He was going way beyond the call of duty; he had no chance of winning the fight yet insisted on trying to trouble the Kazakh.

His efforts proved to be in vain when, in the 10th, a shot to the temple sent Murray down for a third time. As he lay on his back, no one could have held it against him if he elected to stay where he was. Instead, he rose to his feet and saw out the round, just.

A look of disbelief crept over Golovkin’s face as Murray came out for the 11th, although the fight was over 50 seconds later after a barrage of punches cruelly ended Murray’s chances of hearing the final bell.

It is the furthest anyone has ever taken Triple G, something Murray can proudly hang his hat on after a display of incomprehensible courage. Although he was outclassed and outgunned, Murray proved he is one of the toughest middleweights on the planet.

Prior to his first assault on Arthur Abraham’s WBO super-middleweight title, most considered Paul Smith a competent British champion who was in over his head.

With a spirited performance, Smith pushed the champion to the wire and, despite the wide scorecards, forced a very close fight. His detractors were quietened but not silenced, with some theorising that his performance was more of a fluke due to Abraham’s lack of motivation.

In their rematch on Saturday night, Smith managed to put those theories to bed by putting in another game performance, only to lose another unanimous decision, this one with scores a lot more accurate than the last.

Smith’s work rate gave Abraham nightmares in their first meeting but better preparation for this one meant the Armenian was able to set himself apart more convincingly, again being the one to land to more eye-catching punches.

Despite a few worrying moments in which Abraham shook up Smith, the Merseysider rallied back, whipping his opponents body with left and right hooks while constantly trying to work around his high guard.

In comparison, Smith performed just as well as he had in the first fight, the only difference being that Abraham made a marketable improvement. While this confirms Smith’s place on the world stage, you would have to question how long he can stay there.

In Abraham, Smith was arguably facing his best chance of winning a title at super-middleweight, yet just fell short of the mark.

Now, after two unsuccessful consecutive world title tilts, it seems unlikely Smith will be granted another attempt at one in the near future or, perhaps, ever again.

On the Abraham-Smith undercard, British heavyweight David Price laboured through five rounds with Brazil’s Irineu Beato Costa Junior before stopping his man in the sixth.

Returning from injury after an eight-month hiatus, Price dictated the dawdling pace before pole-axing Costa in the sixth, dropping him three times and forcing the stoppage.

While the need to ease back into boxing after such a layoff is understandable, Price’s performance suggested the former British and Commonwealth champion was eager to squeeze as many rounds out of his opponent as possible.

Costa’s minimal foot movement made him an easy target for Price’s long jab, however the Brit seemed reluctant to unleash his dangerous right hand. Instead, he slowly moved through the gears, a stark contrast to the Price that blasted through the likes of Audley Harrison and Sam Sexton.

Since a tumultuous 2013 which saw Price stopped by Tony Thompson twice, he has been on the comeback trail under Sauerland Promotions but is yet to build the momentum he had before those losses.

It seems he is intent on accumulating rounds of experience, something he was short of due to his knockout power. While that is an admirable aim, it resulted in poor viewing on Saturday night.

In Costa, Price had an opponent he could have dispatched of much earlier on a stage that had plenty of eyes on it, because of the main event. As Eddie Hearn pointed out, Price’s performances will not have the likes of Hughie Fury and Anthony Joshua shaking in their boots.

With a handful of popular boxers fighting over the weekend, Berlin and Monte Carlo were mobbed by thousands of travelling fans supporting their fighters.

While the legions that Ricky Hatton took to Las Vegas remains the benchmark, the support UK fighters had this weekend was an encouraging sight.

Chants broke out at the weigh-ins and during the fights themselves, drowning out support for the other fighters.

Paul Smith and Martin Murray both made a point to thank the fans that bought tickets to their fights, while the increasingly popular Josh Warrington had a huge following despite only fighting in an eight-rounder.

Warrington’s raucous fanbase harks back to that of Hatton, and considering the Leeds man is yet to even fight for a world title, it bodes well for the support he will garner in the future.

After previous world title tilts in front of partisan crowds, Murray’s fight with Golovkin was surrounded by British support who buoyed their fighter to the 11th round and their continued support of him after his defeat echoed the chanting Hatton received after his stoppage loss to Floyd Mayweather in 2007.

Carl Frampton makes the first defence of his IBF world title this weekend, and while his fans will not need to travel far, the Odyssey Arena in Belfast will be rocking with support for The Jackal.

It’s clear that support for UK boxing is very much on the up.