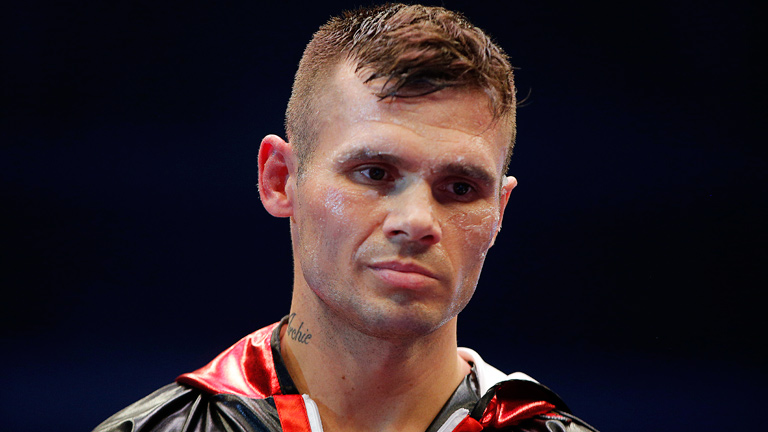 MARTIN MURRAY is open to a fight with Chris Eubank Jr after the pair traded barbs on social media, though doubts the British middleweight champion would take him on.

Murray, a former holder of the Lonsdale middleweight belt, has thrice challenged for world honours at 160lbs, as well as one attempt at super-middleweight.

Last month he was outpointed by George Groves in a super-middleweight title eliminator, and is now considering a move back to middleweight.

“I put out a tweet a couple of weeks ago saying I was still undecided and asked people what fight they wanted to see me in and more than 75 per cent said Chris Eubank Jr, obviously back down at middleweight,” he told Boxing News.

“I put another tweet out saying it would be a great fight, and he came back saying something, I’ve forgotten what.

“My problem is that I’m too risky for guys like that, that’s why I’ve always been drafted in as the away opponent for my world title fights so fair play to Groves for taking the fight down in London.”

All of Murray’s world title fights took place on the road, and three saw him on the wrong end of close decisions on the scorecards. The other loss came against Gennady Golovkin, who stopped Murray in 11 rounds last year.

The 33-year-old is undecided about whether he will drop back to 160lbs and will first go on holiday with his family before sitting down with promoter Eddie Hearn.

The St Helens man feels he is in an awkward position now, clearly seen as a threat by most contenders yet not in a mandated position to fight for world titles at 160 or 168lbs.

“Barring Golovkin, world champions have got that wall of being able to rip me off if I’m in their backyard,” he continued.

“The risk I pose for people like him [Eubank] fighting me at home is too much, if there’s big fights out there they’re not going to take that.

“I’ve always said I’m the second best middleweight in the world, if he wants the fight obviously they’re the types of fight I want to be in. It can be done. I’ll wait and see what happens, I only put the tweet out because so many people want to see it.”

Ok big lad. You’ll most probably use this as another publicly stunt but if your Dad will let you…lets do it! https://t.co/ejK9HbZc7X

Eubank is currently on the lookout for a fight after he, and his team, botched their chance at securing a fight with unified middleweight champion Golovkin.

After missing the deadline to sign the contract, Eubank was usurped by IBF welterweight champion Kell Brook, who will meet the fearsome Kazakh in London on September 10.

While Murray, like the rest of us, was shocked by the Golovkin-Brook announcement, he never expected the Brightonian to challenge ‘GGG’ at this stage.

“Brook, I was not expecting that whatsoever, but I said all along – it created a lot of interest, Eubank and Golovkin – but I told everybody that it will not happen,” he claimed.

“Eubank gave up his [WBA] interim title because he would’ve had to fight Danny Jacobs, then he used the excuse of wanting to win the British title. If there was an easier world title fight he would have taken it, but he knew that if he took Danny Jacobs, Danny Jacobs would beat him. That’s why he gave it up.

“Boxing’s a funny sport, it’s the only sport where you can be a d***head and people will be interested, but if you’re a normal lad that’ll fight anyone who keeps himself to himself, people aren’t as fussed.”