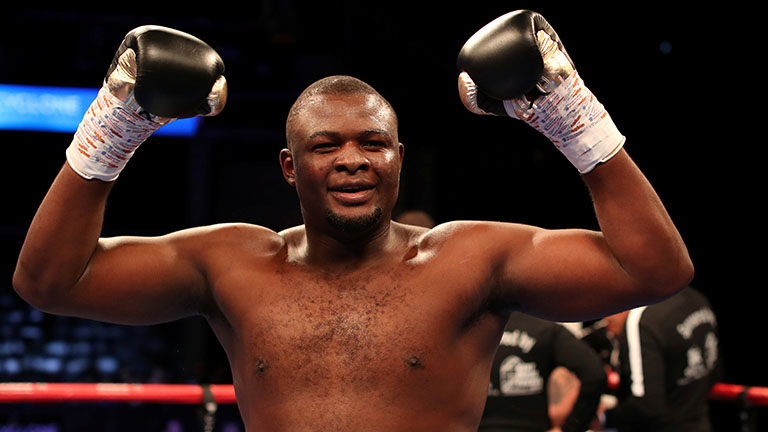 'Martin Bakole is the next big thing in the heavyweight division,' promises Barry McGuigan

Highly-rated heavyweight Martin Bakole – who spars with Anthony Joshua – will top the billing on Channel 5 when McGuigan’s Cyclone Promotions host an impressive line-up at London’s York Hall on October 13.

Scottish-based Congolese star Bakole has been helping heavyweight champion Joshua prepare for his September 22 clash with Alexander Povetkin, and will face Michael Hunter in London in front of the Channel 5 cameras.

McGuigan believes the future of boxing depends just as heavily on free-to-air coverage as pay-per-view offerings, insisting the next generation of young boxers must be able to have easy access to quality fights.

“Free-to-air coverage is so important for the future of the game; it’s important to get the right sort of people to have an interest in the sport,” McGuigan told Press Association Sport.

“We want the general public to have the chance to see good quality fights, not just fights, but high quality fights, on free-to-air television. And that’s what we’re providing.

“It is a hard fight because we need the budget in order to get the right kind of fights.

“Most of the time we don’t have the budget, but Channel 5 are committed to professional boxing for fingers crossed a substantial length of time.

“I genuinely believe we are giving real value for money. I just hope the sports editor sticks with us.

“I know we’ve had audiences of 1.5million in the past with Andrew Selby and Josh Taylor. So we believe we can continue to bring in big audiences.”

Heavyweight prospect Bakole has been widely tipped as one of the next big stars of the division.

The 26-year-old insists his time spent training in the ring with Joshua means he fears no one in the sport’s blue-chip division.

“I’m not here to play games, this is my job, this is what I’m doing with my life,” said Bakole.

McGuigan backed Bakole’s pedigree, insisting he has the ability to step right to the top of the sport.

“Martin Bakole is the next big thing in the heavyweight division,” said McGuigan.

“He’s been sparring extensively with Joshua in the build-up to the Povetkin fight, he did nine rounds with him on Tuesday.

“He’s a really, really talented man, he’s got a very bright future ahead of him.

“He’s naturally gifted, natural head movement, fast hands, a big lump and he can really fight. I have very high hopes for him. This is a hell of a dangerous fight for him.”