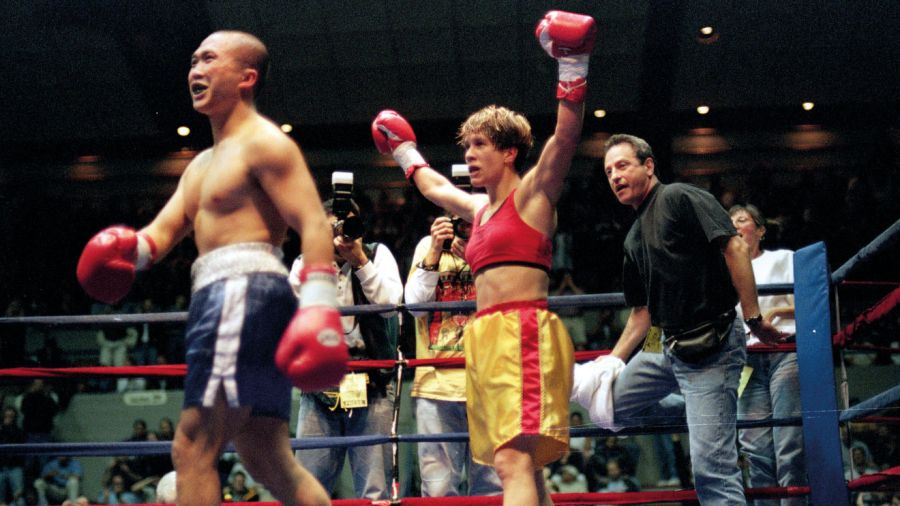 WRESTLER Ric Flair famously said “to be the man, you’ve got to beat the man”, and some 21 years ago Margaret McGregor did that very thing – despite being a woman. October 1999 was a strange time for women’s boxing. Mia St John peeled off for Playboy in a move that generated more attention than her athletic abilities ever would. Laila Ali made her debut and, by virtue of her famous father, became female boxing’s biggest star in the 31 seconds it took her to brush aside a tubby waitress. And one day later McGregor contested the first and only licensed male vs female boxing match in history – and won it.

Women’s boxing was at the time still seen by many Americans as a novelty act at best. Ability was no antidote to anonymity. If they were lucky, genuinely world class operators might get a spot beneath Butterbean on a Top Rank card. Otherwise they would typically have to fight abroad or off-TV.

Super-featherweight McGregor coveted a world championship, but the division’s monarchs of the time – Deborah Nichols (IFBA) and Melissa Del Valle (WIBF) – don’t tend to make appearances in “On This Day” sports features. But on the day of October 9 1999, McGregor earned a bit of history that may never be repeated – and more headlines than most women’s world title fights.

Her fight against Vancouver’s Loi Chow in Seattle, Washington, also went ahead without TV, but it generated plenty of press, much of it negative. The late Bert Sugar, former editor of The Ring, decried the “carnival act”. It was labelled “absolute madness” in the local Seattle Post-Intelligencer newspaper. The Associated Press said the bout was “disgraceful” and a “freak show” and wanted the result “consigned to the dustbin”.

McGregor, though, insists her mixed-gender match was a positive development – and one that should happen again.

“I honestly feel it helped both women and men,” she tells Boxing News. “It helped people to think a little differently. It changed old-fashioned attitudes.

“For me, it wasn’t a feminist issue; at the time I didn’t know any feminists, but afterwards I did hear they said I had done a lot for women [by winning that fight]. I appreciated that.”

She didn’t pay attention to the critics in the build-up: “There was opposition, but I really didn’t care. I was too busy training to get involved in that conversation.

“When someone tells you that you can’t do something, it just makes you want to do it more.

“There are plenty of women out there like me who would do it [fight a man], and they should. You should let a woman do what her heart wants.”

One such woman is Claressa Shields. She has issued calls to box a man and last year the three-weight world champ – and reigning WBC/WBO super-welterweight ruler – said she reckoned she could beat the likes of Keith Thurman and Shawn Porter, and even that she could give Gennady Golovkin “a run for his money”.

“I don’t really follow women’s boxing now,” says McGregor. “I just hear bits and pieces, but I’d pay to see that. Shields is pretty good, and hearing what she wants to do [fight a man], she’s my favourite.”

Fighting and beating the likes of Thurman, Porter or Golovkin would be a significantly taller order than doing so against Chow, though, as McGregor concedes.

Chow, a 5ft 2ins former jockey, entered “The Battle of the Sexes” with a winless two-fight pro record, no known amateur background, a 5ins height disadvantage and, at 123lbs, conceded five pounds in weight.

Still, what Chow lacked in pedigree, he made up for in enthusiasm, and he threw himself into the role of pantomime villain.

In front of the press, Chow stripped off his shirt to exhibit a short but powerful physique honed through wrestling and competitive weightlifting, muscles glistening with Vaseline. He pulled faces, performed one-armed push-ups, and pounded a heavy bag with gusto. He vowed to send McGregor “back to the kitchen, where she belongs”, and warned her: “I hit very, very hard.”

In the event, the claim turned out to be irrelevant, as Chow barely landed a punch. McGregor thoroughly outboxed him, winning each of the four two-minute rounds on all three judges’ cards. Fighting just an hour’s drive from her hometown of Bremerton, Washington, McGregor bamboozled Chow with combinations from her markedly longer limbs.

After the fight, she hailed the result as “the highlight of my life” and said of her future: “I’ll fight anybody.”

Chow, perhaps unsurprisingly, would never box again, but remained in character even after his drubbing. “It just proves a woman cannot hurt a man,” he petulantly told reporters.

But McGregor says Chow’s belligerence was just an act.

“Oh, he was very, very nice to me,” she says. “Before the fight, he came to see me and he was wearing a shirt and tie. He was a gentleman. We had a nice little conversation.

“I didn’t see him after the fight and we didn’t stay in touch. I’m not sure where his heart was [in boxing]; it must have been different after that. Of course, he’d been in a no-win situation.”

Indeed, had Chow won, he would have “only” beaten a woman, and would likely have been vilified for doing so. As it is, he has the dubious distinction of being the only man to lose to one in a boxing ring. He clearly relished the spotlight, but vanished from it in the aftermath. Boxing News tried to track him down for this article, but he was nowhere to be found.

And how did he find himself in this unenviable position in the first place?

“It was my trainer’s idea,” says McGregor. “We couldn’t find a female opponent for that night. Vern [Miller, her coach] and I were just brainstorming, and he said I should fight a man. I said I’d do it, and I wasn’t joking. I said I’ll fight anybody, at any time.”

What may have been intended as a throwaway remark by Miller planted a seed in both McGregor and her promoter, Bob Jarvis, who started looking into the legalities of the idea, and scouting around for an opponent.

“We found there was nothing in the [Washington State Athletic Commission] rule book that says a woman can’t fight a man,” says McGregor.

“They found a man in Canada [Hector Morales, who would have been making his pro debut] who agreed to fight me, but he dropped out. I’m not quite sure why. So his trainer sent in [stablemate] Loi Chow.”

The fight was agreed, with the contestants to earn equal pay at $1,500 each, and then approved by the commission, who after three weeks of deliberation could find no legal reason to block it.

Fighting a man was more than just a gimmick for McGregor. It was more than sport, too. For her, it had an intensely personal complexion.

Eighteen years earlier, McGregor was a teenage bride, just three months into her marriage, when her husband turned violent. It spelled the end of their relationship, and she would never marry again, but the incident pushed her into the arms of a new love – combat sports.

“My husband at the time, he’d had a few beers and we got into a verbal altercation,” says McGregor. “He pushed me against the wall, hard, and then he beat me.

“Well, that was it for our marriage. I walked straight out. I was just 18. I decided I would never let that happen again, so I started martial arts. My best friend’s brother ran a Shotokan karate dojo, so I went there. I became a third dan black belt.”

Eventually she wanted to compete, and so she turned to kickboxing. She had “around eight fights and won all of them” in the early and mid ’90s before converting to boxing “when I found I could get more bouts”.

Following her “Battle of the Sexes”, McGregor added another win (against a woman) and, at 5-0, was looking for a championship opportunity. But just four months after beating Chow, her boxing career was over.

She fought former WIBA challenger Snodene Blakeney in Temecula, California, in December 1999 in what should have been a barometer of her own title ambitions, but she slumped to a six-round points defeat after a listless performance.

McGregor said she had struggled in training and then on the night of the Blakeney bout, “even during the warm-up, I was absolutely exhausted”.

She scheduled a comeback for February 2000 and trudged through another camp, until the cause of her malaise was diagnosed: hepatitis C. Given that this is a disease transmissible through blood, McGregor had no choice but to retire from boxing at 36.

“I was really, really sick,” she says. “First I had the hep C, and then [in 2005] I got spinal meningitis. My heart was racing and I suffered a speech impairment.”

Her symptoms worsened and her treatments failed, so McGregor turned to God.

“I started praying for help,” she says. “I found the Lord and he helped me.”

Slowly, she started to feel better, and as she did so, her thoughts turned to fighting again.

“I saw Victor [Solier, her former kickboxing coach] had a new MMA gym and there was an advert in the paper saying ‘come train with us’. I said to myself ‘OK!’. I was 47. I found I really loved MMA. It has a combination of everything. It’s my favourite fight sport – even though I wasn’t very good at wrestling!

“I started to ask, could I fight again? So I went to the doctor and did some tests. The results came back, everything was fine, the hep C was gone. Jesus had healed me.”

McGregor would have four MMA matches for a local promotion, losing the first in July 2010 but winning the other three, before finally hanging up her gloves for good in 2013, aged 50.

Nowadays she keeps busy as a housekeeper and landscape gardener. Beyond that, “I love camping and riding my motorcycle. I’m still involved in martial arts and just staying happy”.

Those last few MMA contests may have been low key but they were a personal accomplishment for an athlete whose momentum was cruelly snapped while at the peak of her fame – a fame based on oddity, perhaps, but which exceeded that of the champions of her time.

McGregor never did beat a world champion, but she did beat a man – and for a while, in women’s boxing, that made her the man.

Oliver Fennell began writing for <em>Boxing News</em> in 2000, having populated his contacts book in the late '90s and early '00s while running a boxing website during the pioneering days of the genre. A boxing PR stint followed in the mid-'00s, before he returned to the <em>BN</em> fold by covering the Thai scene during a lengthy spell as an expat. He is now a regular contributor since relocating the UK in 2018 and otherwise has been published by a variety of newspapers, magazines and websites. Oliver is also a BoxRec editor as well as a panel member on the Transnational Boxing Ratings Board.