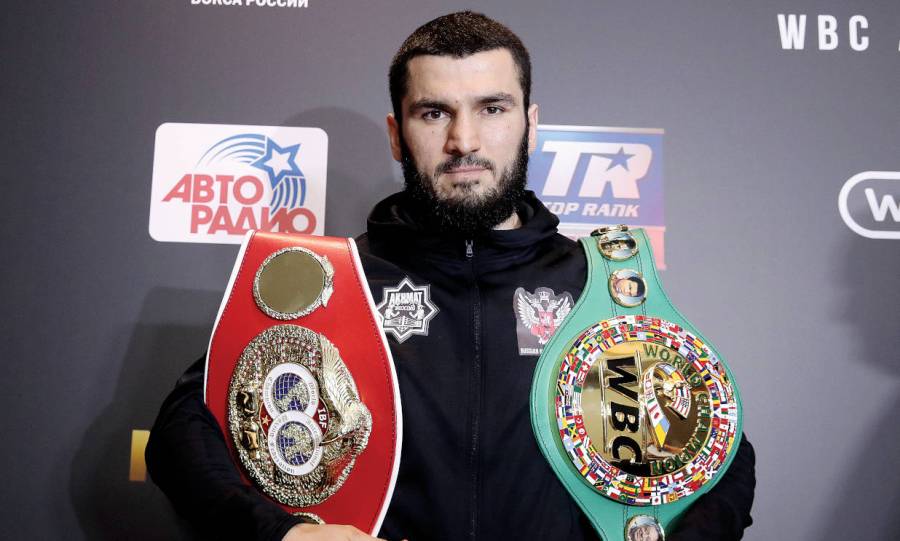 Artur Beterbiev gets a stern test in the shape of Marcus Browne, writes Elliot Worsell

JUST as it is only natural – we hope – that they will one day fight, so too is it only natural that Russian light-heavyweights Artur Beterbiev and Dmitry Bivol will be compared along the way. Yet, although they share a nationality, two more dissimilar fighters you would be hard-pressed to find. Bivol, who last weekend defeated Umar Salamov over 12 rounds, is a measured and methodical technician who wins most of his fights wide on the cards, whereas Beterbiev, all bowling ball shoulders and unbridled aggression, is considered one of the most fearsome one-punch knockout artists on the planet (and has yet to hear the final bell as a pro). They are both Russian, they’re the top two fighters in the 175-pound division (Beterbiev is champion, Bivol ranked number one), but they are polar opposites in pretty much every other regard. This becomes all the more apparent when they are competing in close proximity like this – one after the other. First it was the turn of Bivol and now it’s the turn of Beterbiev, who this Friday (December 17) puts his world championship on the line against American southpaw Marcus Browne.

It would seem, on the face of it, Beterbiev, 16-0 (16), has the trickier task ahead of him, for Browne, unlike Salamov, is ranked in the Top 10 (at fifth). At 24-1 (16), the New Yorker’s only loss to date is a technical decision after eight rounds versus Jean Pascal in 2019, and there is decent win on his record, too, against former beltholder Badou Jack (a unanimous decision in 2019). That victory over Jack, infamous for the nasty cut Jack suffered during it, proved to the world that Browne was a capable operator and that he could, on his day, give top fighters problems.

The fact he is a southpaw, and a rangy one at that, also helps. His arms are unusually long and he fights from a wide stance, often leaping in and out of range to take his opponent by surprise. While not a one-punch knockout specialist, and certainly nowhere near as devastating a puncher as Beterbiev, Browne nevertheless carries with him some spite, some aggression, and a willingness to engage, which alone makes him a threat.
He went after Jack, for instance, with no fear whatsoever, spiking him from mid-range with his left hand, a punch he threw repeatedly to Jack’s head and body. Jack, remember, is no easy man to hit, either. His defence is tight, his forearms up by his face. Yet Browne impressed by going after him that night and increasing his punch output, knowing he would make a dent in his closed-up opponent only by remaining aggressive and active at all times.

Against Pascal, too, Browne started well. He outlanded the Canadian through the first three rounds but was then knocked down in the fourth when caught by a counter right hand in an exchange. Up too quickly, Browne resumed the fight on unsteady legs and found himself dropped for a second and third time in the seventh round. The first was from another well-timed Pascal right, while the second knockdown was due to an accumulation of shots. (As before, he was outlanding Pascal at the point of the first seventh-round knockdown, 104 to 44.)

In the end, a cut caused by a Pascal headbutt brought a premature conclusion to that particular fight. However, despite its unsatisfactory ending, there was still much to glean from what happened between Pascal and Browne in New York.

From Artur Beterbiev’s point of view, he will know he is boxing a man this weekend with a capacity to throw plenty of stinging punches from the southpaw stance, with as many aimed at the body as the head. He will know Browne moves a lot, and has the kind of stamina that enables him to fight as hard in the final third of a fight as he does in the first.

Yet Beterbiev will also see in Browne someone whose willingness to engage invariably leaves him open and vulnerable and whose susceptibility to big punches has already been established. And if this again rings true on Friday, there are few fighters as dangerous for someone like Marcus Browne as Artur Beterbiev, a champion who requires only one small opening and one big shot to turn a fight on its head.

Whether on Friday Browne racks up a lead with his activity or finds himself overpowered early remains to be seen. But the safe bet is on him at some stage coming unstuck under heavy fire, perhaps in the fight’s final third.

On the Montreal undercard Quebec’s Marie-Ève Dicaire, 17-1 (0), who earlier this year lost a lopsided decision against Claressa Shields, contests the IBF women’s super-welterweight title against Cynthia Lozano, who is 9-0 (7) as a pro but has yet to fight outside Mexico and has fought only novices to date. There is also a 10-round fight between 41-year-old Canadian cruiserweight Yan Pellerin, 12-1 (5), and Mexico’s Francisco Rivas, 15-2 (5).

The Verdict Beterbiev should get the job done but Browne is a solid challenge.