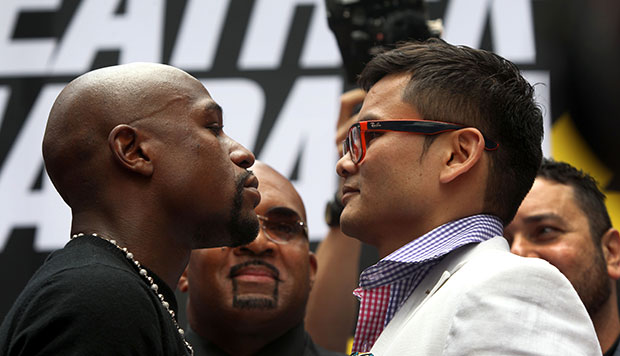 As the duo square up in Chicago, Marcos Maidana admits he cannot beat Floyd Mayweather on points

“I’M GOING to have to go for the knockout this time, I have no choice. Floyd Mayweather’s defence is very good and at times it is hard to hit him. That’s why I want to knock him out.

“First, I’m going to give him a beating and then I’m going to knock him out. It’s going to be hard to get a decision because he connects well and knows how to score points.

“I’m going to make some technical adjustments, work on my distance and always pressure him. Our camp last time was great, but we just need to make minor adjustments to get the win.

“Floyd Mayweather is trying to get under our skin, but it’s not going to work. We’re going to do our fighting in the ring and this time we’re going to win.

“Floyd can say whatever he wants about me. He knows that I gave him the toughest fight of his life. The only difference is this time I will knock him out.

“This will be a different fight. He knows what I bring to the table and he knows how I fight. I don’t want to leave any doubt whatsoever. To beat a champion like Floyd you have to knock him out.

“I promise I’m going to put on a great fight and I’m going to shut his mouth. He doesn’t respect anything or anyone. He might have money, but he doesn’t have respect.

“One hundred percent the gloves made a difference in the last fight. The gloves I use are fit to my hand and are more comfortable. But the ones that I was forced to wear were not comfortable.

“But the bottom line is, this time I’m going to win with any glove that I wear.

“We only had five weeks of sparring and training camp last time. But in this camp we’ve already been in the gym for a week and we still have eight weeks to go. So we will be 100 percent ready for September 13.

“The rematch was unexpected because I thought Floyd was not going to agree (to fight me). And then, one day out of the blue, I got word Floyd wanted to fight me again. By then I was already thinking I wasn’t going to fight again this year.

“For me, what’s really important here is to come out victorious. I come here to win and I don’t really care about money.

“I think many fighters are obsessed with Mayweather. Everybody wants to fight him because they get the chance to make history if they win. And I want to make history.”